“I’m done with this show, I’m done, I’m done,” said Ryan’s mom, in tears, after the couple walked out.

The two first got into it las week, after Taylor accused the two of putting Bentley — Maci’s son with Ryan — in an “unsafe” position by letting him be around his father. Taylor also said Bentley’s grandparents “guilt tripped” him into hanging out with his father, who has shown little initiative to foster that father-son relationship. 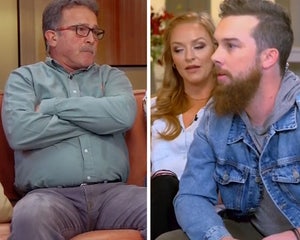 As tensions continued to blow up between them on Tuesday, Taylor told Jen and Larry that “Ryan has never been there for him but y’all put it on Bentley, y’all make Bentley feel guilty.” He then called Larry a “sorry son of a bitch,” and expressed his frustration with watching Ryan call Maci an “evil bitch” during the show.

“You are not putting Bentley first,” Jen shouted, as Taylor shot back, “You ain’t either when you guilt trip him!” As Jen claimed she hasn’t ever done that, Maci said “that is absolutely not true, we all know that’s not true.”

“When you say things … you and Jen … when you all say things like, ‘We can’t have a party without your daddy,’ it’s Bentley’s birthday party, it ain’t Ryan’s birthday party!” Ryan shouted, already out of his seat on the couch. “Put the kid first, stop putting that sorry excuse for a human being first!”

They then walked out of the shot, but could still be heard yelling off-camera. “Tell your coward of a son to come sit on the couch next year!” Taylor shouted, “If he wants to run that big f—ing mouth.”

Mackenzie Edwards Claims She, Ryan Edwards and His Parents Were 'Fired' from Teen Mom OG

After they left, Dr. Drew asked Jen and Larry whether they had watched the show this season and seen the “terribly harsh” things Ryan has said about Maci, the same comments that have made Maci and Taylor so upset.

“And you don’t think they don’t say things about Ryan, after that mouth right there?” said Larry. “Now you know why I think he could be manipulated.”

“This is like off the charts right here,” added Jen, after Dr. Drew said he was surprised by Taylor’s behavior and by the fact the two left.

“They talk about how they bend over backwards. Let me tell you something, we have swallowed some crow. You have no idea,” said Larry, as Jen told him to “just stop.”

When Dr. Drew noted that the person Taylor is actually mad at is Ryan, Jen asked, “Is he angry at Ryan or is he jealous of Ryan? What is it?” The two then said they had no idea of or any control over what Ryan had been saying about Maci on the show. Jen said Taylor and Maci should come back and explain everything to them, adding, “Let’s be f—ing adults.”

Their segment ended with Jen in tears, as she said, “I’m done with this show. I’m done, I’m done.”