Rowing fans put on a casual display as they attended the second day of the Henley Royal Regatta in Oxfordshire this afternoon.

Among the most prevalent looks spotted along the town’s riverbanks included women in patterned trousers, short strappy dresses and trainers, while men opted for the traditional colourful, striped blazers matched with shirts and shorts or trousers.

If the relaxed outfits are anything to go by, it seems guests didn’t hesitate in taking full advantage of the 182-year-old dress code finally being ditched in favour of a more modern 21st century approach, which allows women to wear a dress or skirt above the knee.

The long-standing sartorial rules – which asked for over-the-knee skirts and no trousers, and a blazer or smart jacket – have crumbled under pressure from campaigners who branded the former dress code ‘symbolic of an era when women couldn’t compete and were just there to look pretty.’ 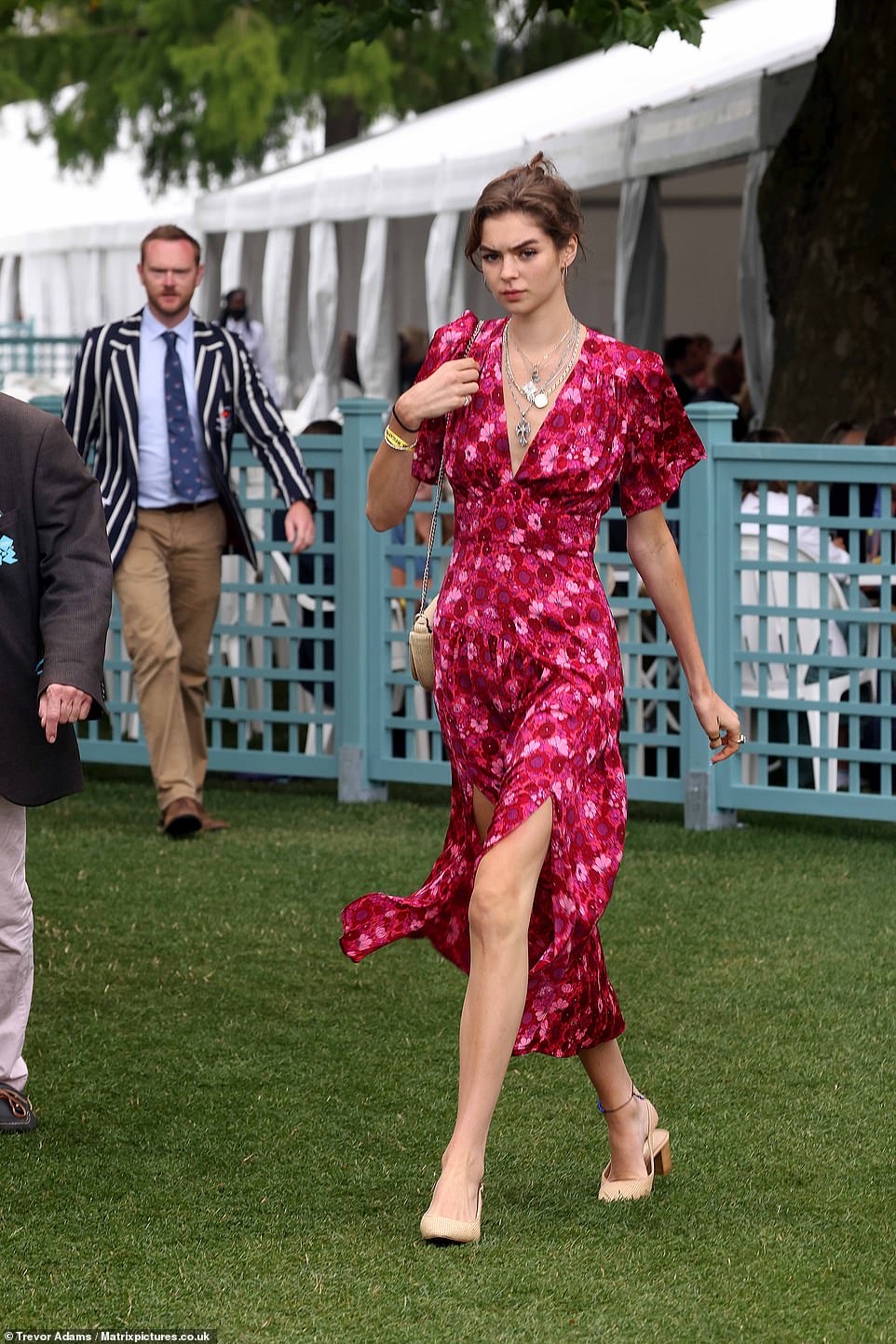 Pretty in pink! Rowing fans put on a casual display as they attended the second day of the Henley Royal Regatta 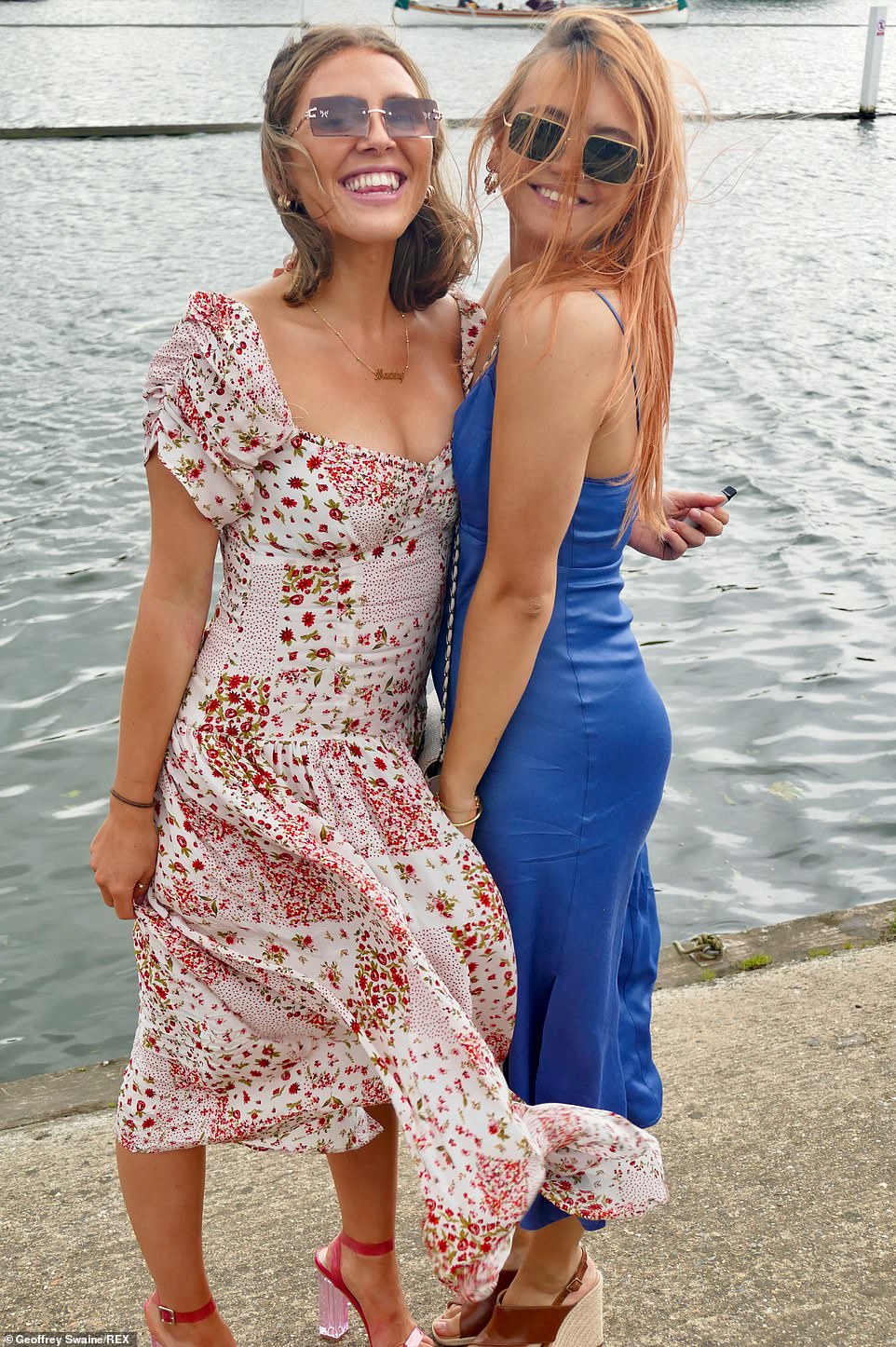 Flower power! Guests wear their finery and cheer up a grey, overcast and drizzling day at the regatta 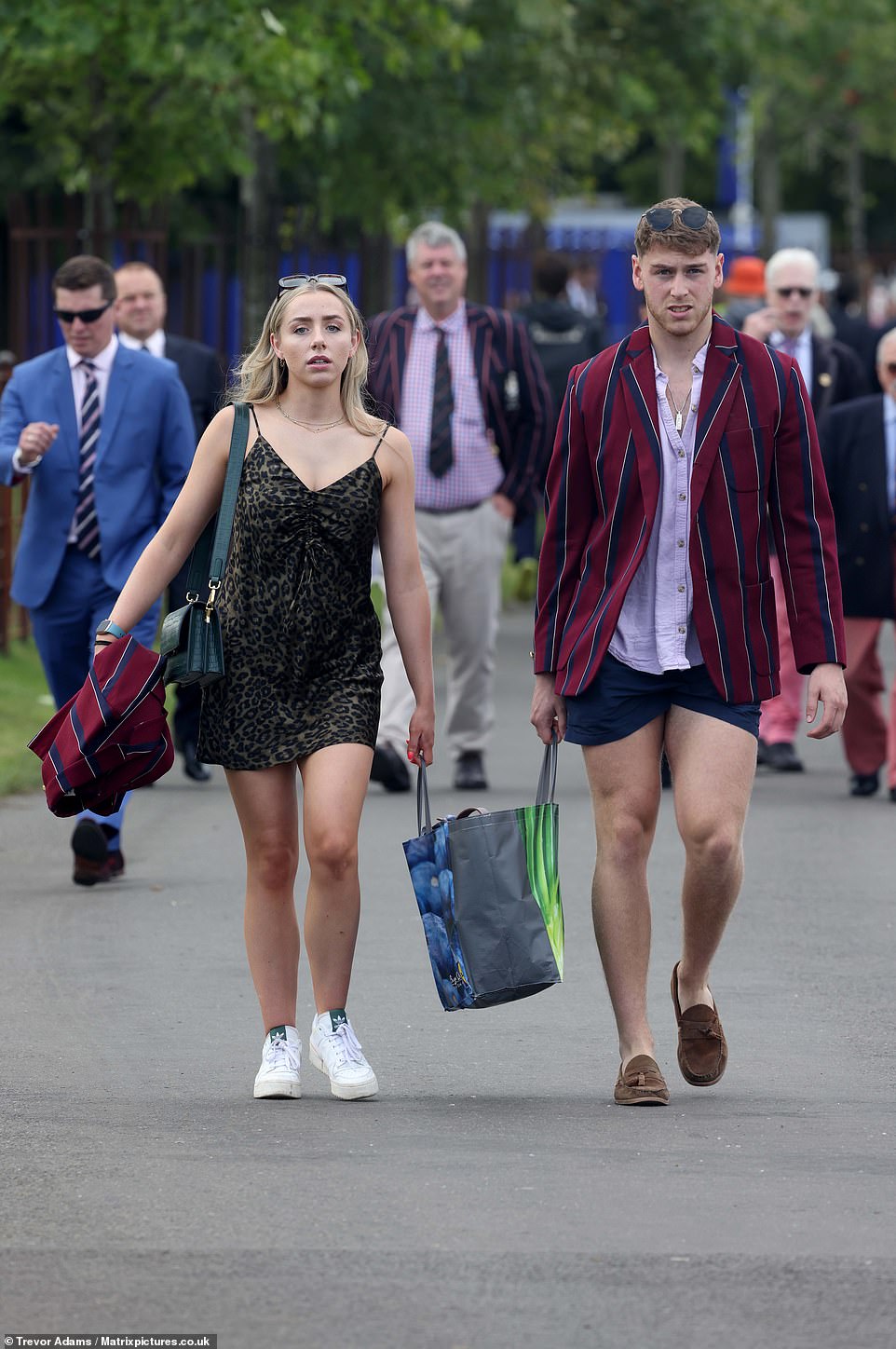 One female guest was seen in a short strappy dress and trainers, while her companion opted for shorts, a blazer and loafers 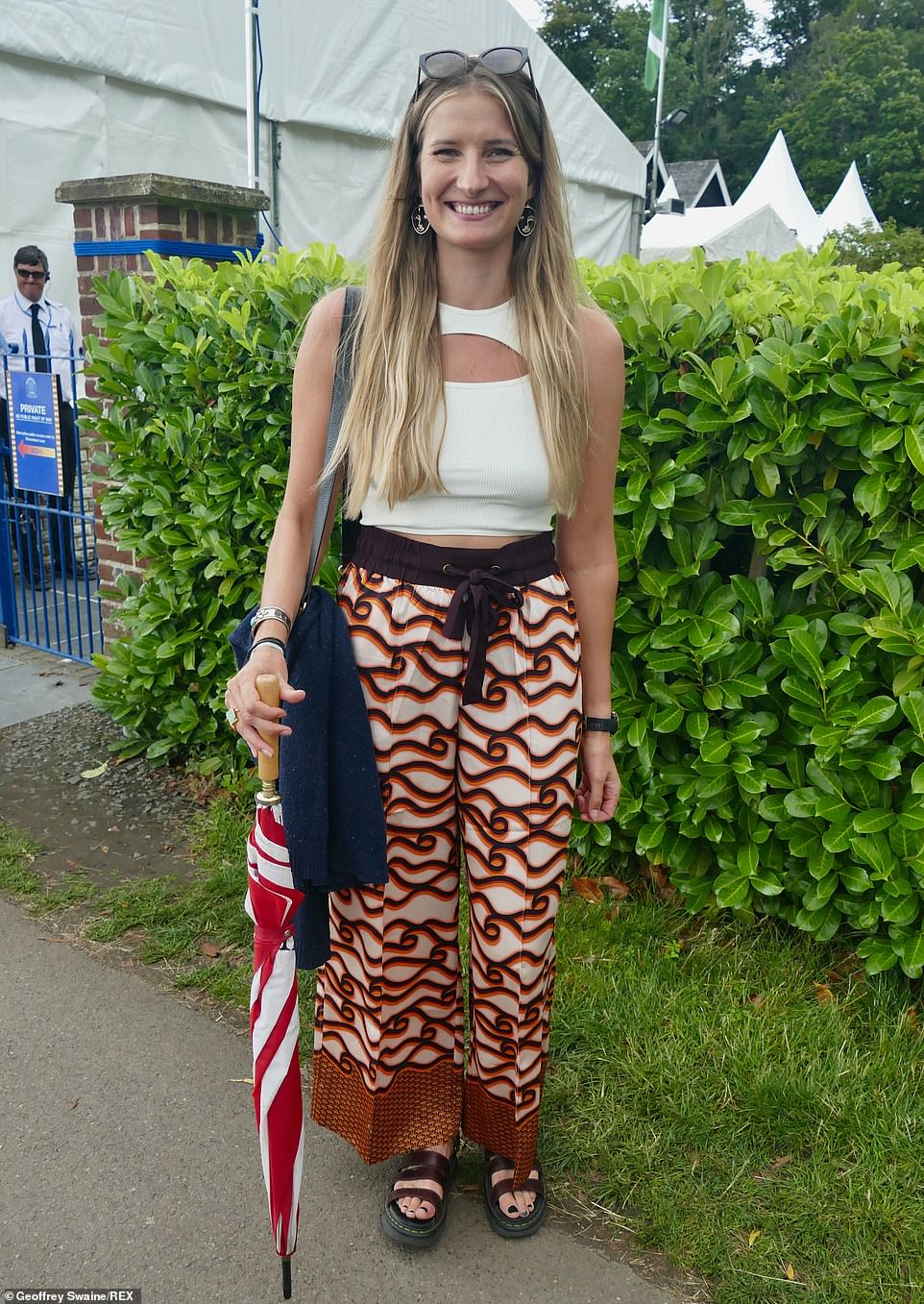 Among the looks on display along the town’s riverbanks included women in patterned trousers and a pair of classic Dr. Martens

Shops in the riverside town have already reported a boom in sales of shorter dresses and skirts ahead of the meet beginning.

It comes after guests on Wednesday were spotted wearing casual brands including Birkenstocks and Converse, with two attendees also opting to stretch the trouser rule to its limits – by donning skinny jeans.

Many of the gents also adopted a more relaxed look, with shorts and colourful trousers, teamed with sneakers and boat shoes a popular look.

The regatta, which was cancelled last year due to the pandemic, will see national clubs from up and down the country vying for glory on the emerald Thames in races scheduled until Sunday. 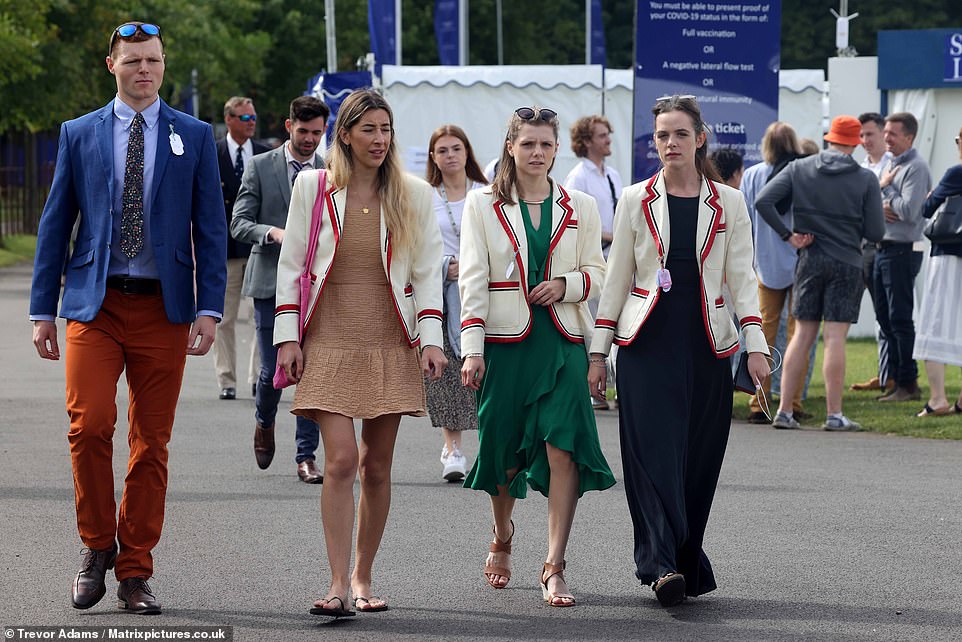 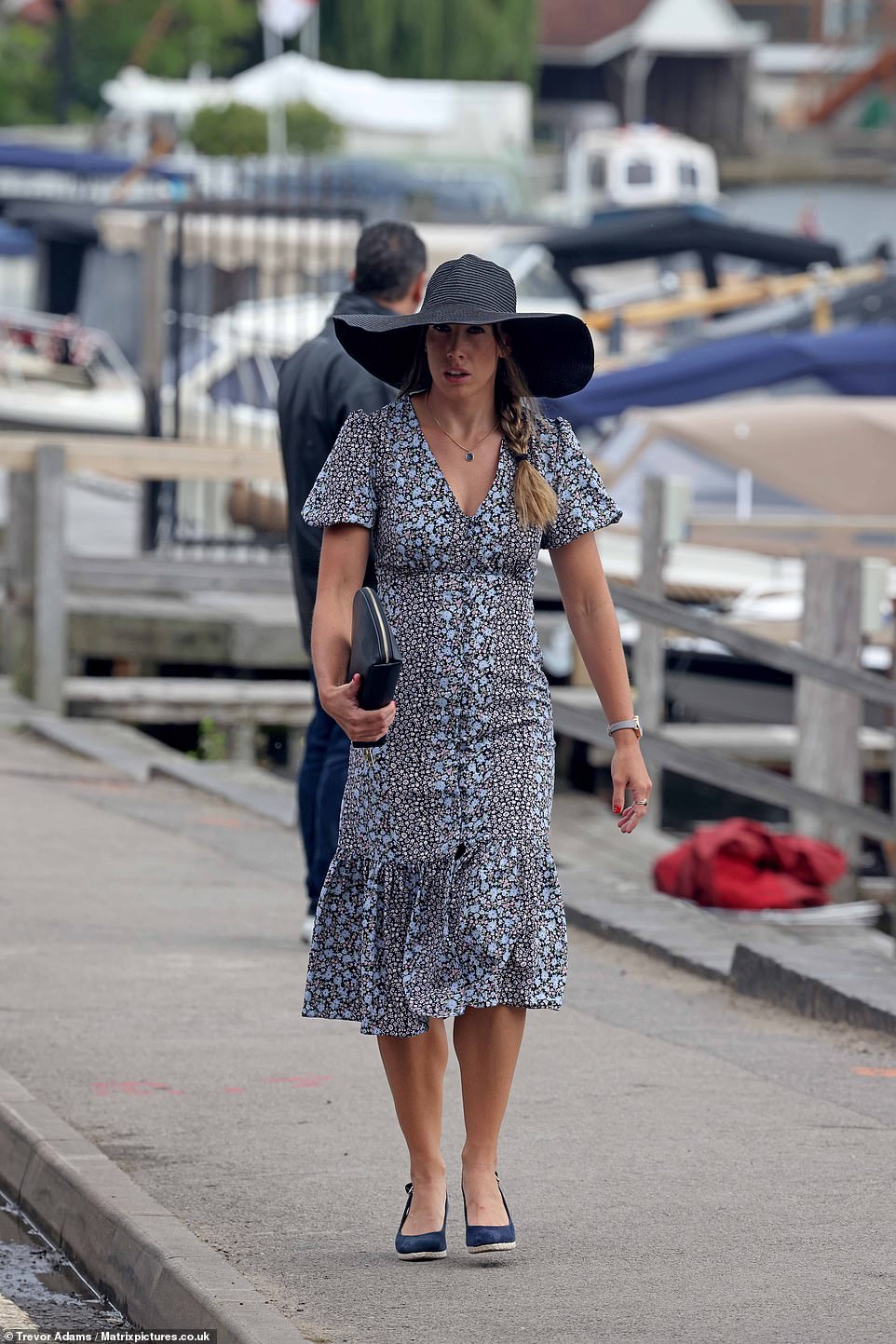 Some racegoers stuck with traditional glamorous frocks, oversized hats and stylish wedges as they arrived for the prestigious event 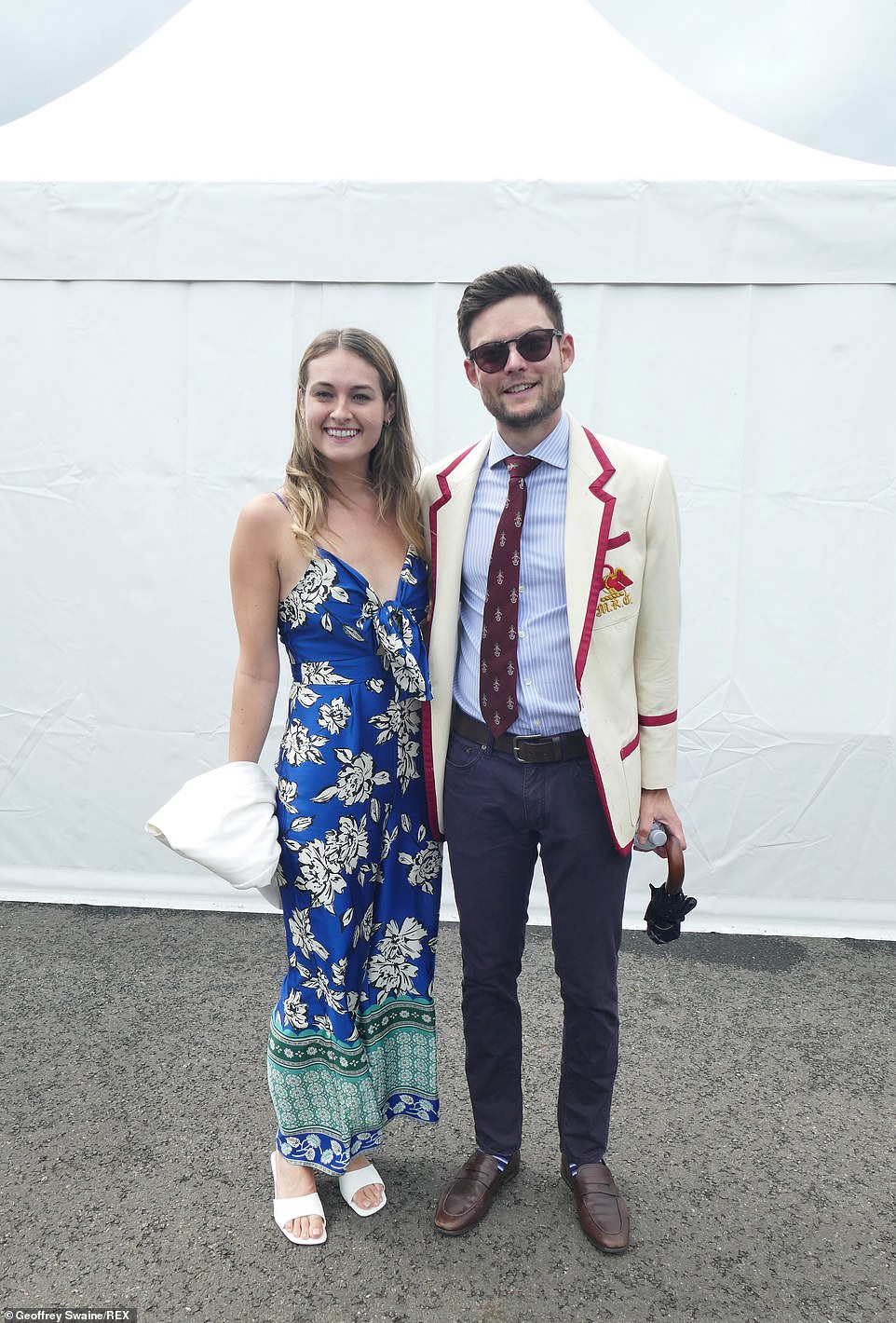 Suited and booted! Many of the men in attendance opted for the traditional colourful blazers matched with shirts

The Regatta has ruled it will hold the event as safely as possible, in line with Government and Public Health and those queuing to get in this morning had to prove they were ‘Covid safe’.

Earlier this week, Regatta chairman Sir Steve Redgrave announced the historic update to the dress code, saying ‘times have changed’ and it is the ‘right time’ to shake up the rules.

He said: ‘We have been asked for a number of years if we could look at the ladies’ dress code because times have changed.

‘Even though we see ourselves very much as a traditional event with a traditional way of dressing, with the introduction of more women’s events in recent years, we felt that it was the right time to make the change.

‘It is not a major change by any stretch of the imagination but we still see the regatta as an excuse to dress up like you would for any other celebration.

‘If you see the regatta as a social occasion, as I do, people like to dress up and that is what Henley is all about – colour and celebration.’

The move has given a boost to women’s clothes shops in the town. Ailsa Meredith, a style advisor at Whistles in Bell Street, said: ‘Some women don’t want to be typically dressed.

‘Going in something unexpected is nice and a way to show your bold personality.’

Georgina Grant, the Oxford student and member of the University Women’s Boat Club rower who last year launched a petition calling for the rule change, said: ‘The petition led to a lot of attention being paid to the dress code and got people talking.

The five days of rowing will take place almost two months later than normal following the lifting of restrictions on large gatherings. 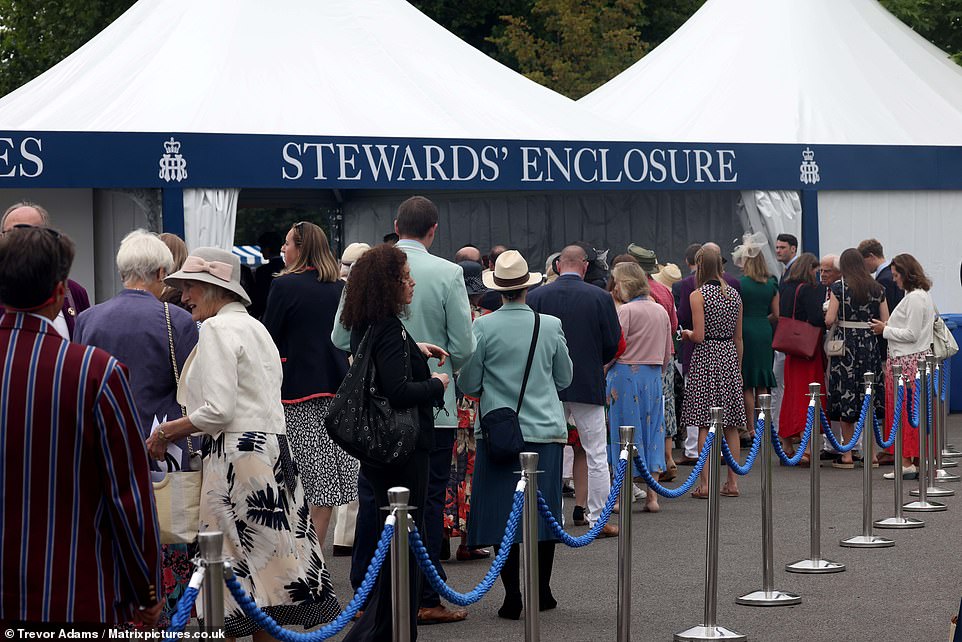 The long-standing sartorial rules – which asked for over-the-knee skirts and no trousers, and a blazer or smart jacket – have crumbled under pressure from campaigners who branded the former dress code ‘symbolic of an era when women couldn’t compete and were just there to look pretty.’ Pictured, guests arriving on day two 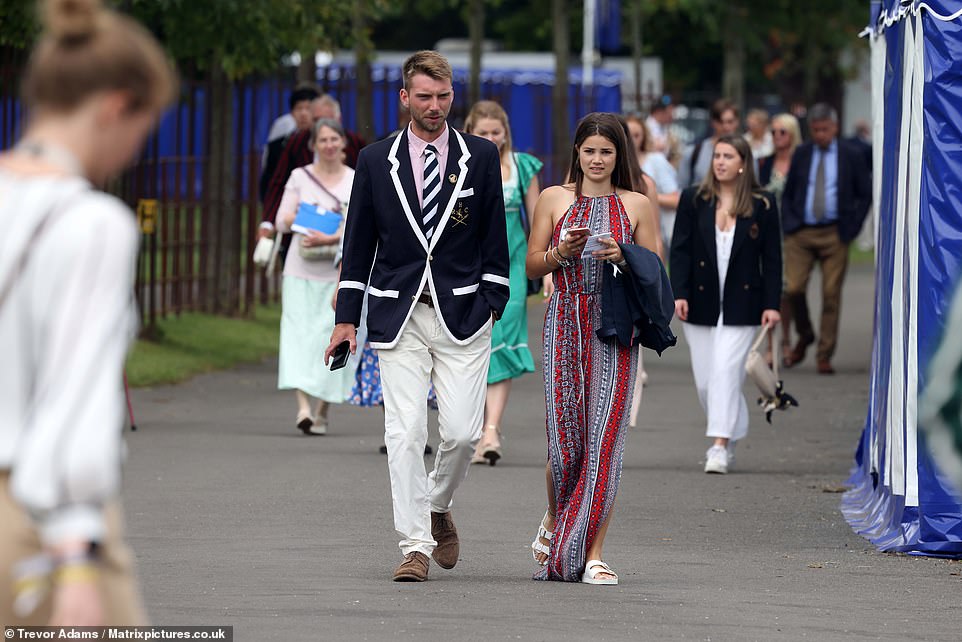 One racegoer arrived in a pair of casual white sandals and a relaxed, striped maxi dress at the rowing spectacle 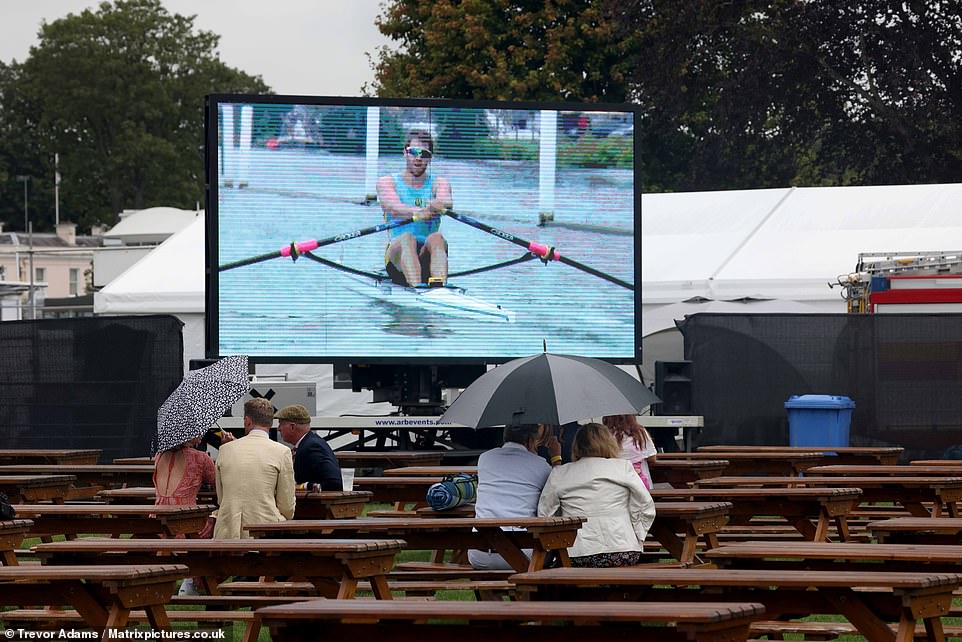 The number of spectators will still be hugely down and the infrastructure has been changed so there will be no grandstand in the stewards’ enclosure and no regatta enclosure while the boat tent has been moved to the opposite bank to usual.

Spectators will be encouraged to wear masks in all indoor spaces, such as the on-site shops and restaurants.

A total of 481 crews – 41 from overseas – will take part in the regatta, which will begin on Wednesday and end with 26 finals, including three new ones for women on the Sunday.

Sir Steve said it was ‘tremendous’ to be able to hold the event, which is one of key dates in the social and sporting calendar.

‘It was traumatic last year to have to pull it and it has been a hard 12 months to get to where we are.

‘Public health has absolutely been high on the agenda for the whole world, not just us at Henley, but we wanted to stage a regatta for the rowers if we possibly could.

‘With the way that things have opened up in the last few weeks, it seems that we have made a good decision to stage it.’