Follow
Home » Lifestyle » Rylance of the Slams: Greatest actor of his generation plays the worst golfer of his

Rylance of the Slams: Greatest actor of his generation plays the worst golfer of his 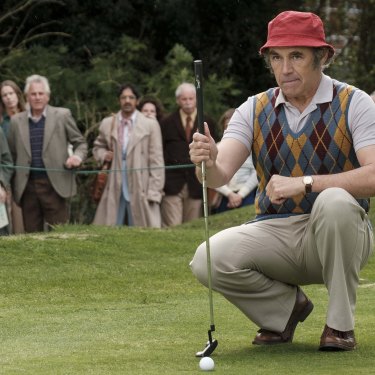 Mark Rylance as Maurice Flitcroft, the man acclaimed as ‘the world’s worst golfer’ after shooting a 49-over score of 121 in the 1976 British Open. Credit:Nick Wall/Universal

The Phantom of the Open star Mark Rylance says he was drawn to the idea of playing Maurice Flitcroft, an amateur golfer who blagged his way into the British Open despite never having played a full round before, because “he was a mystery to me”.

The Oscar-winner has watched TV interviews with the real Flitcroft on YouTube “100 times”, he says, but exactly what was going on in the mind of the former crane driver in those exchanges, and in his improbable stint on the pro-golf circuit in the years that followed, continues to elude him.

“They keep tagging him with ‘the world’s worst golfer’, and you can see him hear that and think, ‘Is that true? No, that’s not true’,” he says. “And you think, ‘You must be taking the piss, you must be winding them up.’ But I cannot see any wink or twinkle. He really does sincerely believe that on a good day, he would beat Seve Ballesteros or whoever was the champion at that time.”

You might call it self-belief, you might call it self-delusion. Either way, it allowed Flitcroft, who didn’t take up golf until late 1974, and had never played on a course until he sauntered onto the grounds of the Royal Birkdale Golf Club in Southport, England, in July 1976 (his practice had been confined to playing fields and the beach), to carry on despite the ridicule and the disapproval he faced. 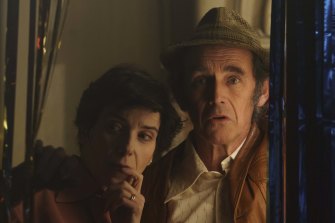 Sally Hawkins and Mark Rylance in The Phantom of the Open.Credit:Nick Wall/Universal

“There’s a kind of Don Quixote aspect to him,” observes Rylance. “He just sees the dream, he doesn’t see the obstacles.”

Flitcroft shot a 49 over par round of 121 that day (a record worst score that still stands) and was promptly evicted from the tournament. For most people, that would have been the end of the matter – an outrageous caper that ended with egg on the face and a ban from clubs across the country.

But Flitcroft found ways to keep on keeping on, attempting (sometimes successfully) to enter the Open and other tournaments under pseudonyms including Gene Paycheki, Gerald Hoppy, James Beau Jolley, Arnold Palmtree and Count Manfred von Hoffmanstel.

The administrators hated him, but the press, the fans and even the golf goods manufacturers loved him. He was the unofficial patron saint of hackers, and a thorn in the side of the toffee-nosed gatekeepers of the Royal and Ancient Golf Club of St Andrews, then the governing body of golf in Britain (and which these days proclaims its mission is “to make golf more accessible appealing and inclusive”, suggesting Flitcroft may have won after all). 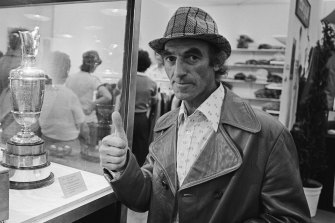 The real Maurice Flitcroft in 1976.Credit:Getty

The Phantom of the Open is an unabashed celebration of this oddball eccentric, maverick, prankster – whatever you might call him. It’s a comedy with tons of heart – Sally Hawkins is his wife, Jean, a staunch ally to her husband, and a dreamer in her own right – but Rylance plays it absolutely straight. If there’s a joke at play, Maurice either doesn’t get it or is the supreme master of deadpan.

“​Sure, I would have liked to have been famous for being good,” the real Maurice, who had briefly been a clown and a musician earlier in life, told The Guardian in 2006, the year before he died aged 77. “But it’s quite good being famous for being bad.”

Rylance is famous for being good. So good, in fact, that many of his peers rate the former artistic director of The Globe in London as the best stage actor of his generation. With an Oscar (as best supporting actor for Steven Spielberg’s Bridge of Spies), three BAFTAs and a Screen Actors Guild award to his name, his film and TV peers clearly rate him, too.

But Rylance insists he still has his doubts. When he saw Bridge of Spies he thought Tom Hanks was terrific, but he left the cinema “utterly depressed. I thought I was dreadful.” Even at 62, with more than 40 years of work and accolades behind him, there remains “a very strong critic inside myself. I’m friendly with him, but he always wants more. He’s a very hungry character, isn’t he, that self-critic?”

Part of what he liked about Flitcroft was “his state of mind”, he says. “It’s not that he doesn’t listen to other people – he hears them, but then he stays with his own opinion of himself. He’s not going to accept the box that society or any other individual might put him in by defining him; he defines himself all the time. 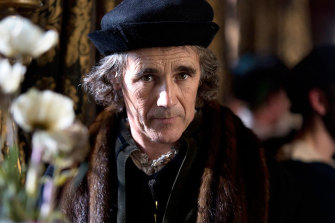 Mark Rylance as Thomas Cromwell in the BBC’s Wolf Hall.Credit:

“I’m not very good at defining myself,” he adds, “or I wouldn’t be an actor.”

Rylance spent 16 of his first 18 years in the US, moving there aged two with his English-teacher parents. They lived in Connecticut for seven years, then in Wisconsin, and then moved back to England. Whether it was down to the dislocations or simply part of the business of being a teen, he wasn’t quite sure where he slotted in.

“When I got into acting at age 12 or 13 in school, I had no idea who I was, I was really self-conscious and confused. But when I watched Star Trek on TV, I knew I could play Spock or I could play Kirk, I knew I could pretend to be one of those people, and for that time that I was pretending to be Captain Kirk or Spock or all the different characters, I knew who I was. Then I knew what I wanted and what my limitations and strengths were, and life was simpler.”

Twenty minutes on Zoom is not much of a basis for psychoanalysis, admittedly, but I wonder if this isn’t also part of what allowed Rylance to identify with the man he plays in The Phantom of the Open.

In the opening scenes, Flitcroft is being interviewed on US television – while the British golfing establishment saw him as an unruly and unwelcome upstart, the Americans loved his chutzpah – and is reflecting upon his childhood in Barrow-in-Furness, a shipbuilding town in England’s north-west.

The path he was expected to tread was school, shipyard, retirement, death, he reflects. But during the Second World War he was shipped off to Scotland to avoid the German bombs, and there, in the warm embrace of a middle-class family, he was exposed to a different world. He learnt languages, music, painting. “The world is your oyster,” his adopted father tells him. 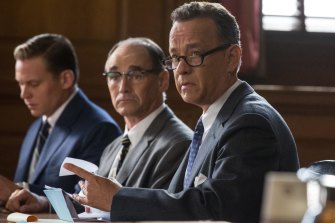 Rylance, centre, between Billy Magnussen and Tom Hanks, won a best supporting actor Oscar for his role in Steven Spielberg’s Bridge of Spies.

But back in Barrow-in-Furness after the war, such lofty ambitions were beaten out of him. “As a child, I did have ambitions to do something else, of course. But any dreams I had tended to end up in pieces.”

I ask Rylance, was that Scottish sojourn a curse or a blessing for Flitcroft? It certainly opened his eyes to possibilities and allowed him to dream, but it also meant he no longer fitted in.

He may overestimate his ability on the golf course but, Rylance insists, “He’s not just a fantasist, he knows about a lot of stuff.”

Above all, he knows there’s something rotten about a system that views the game of golf as the sole domain of the privileged. If he wants to play and believes he can be a contender, why shouldn’t he have that right?

“He had a very strong sense of justice, Maurice,” says Rylance. “He saw it as an injustice for other people to define anyone by their terms, and the class system was part of that injustice.

“I don’t think he was a political creature at all,” he continues, “but his son told me that when they were watching the [1986] World Cup and Maradona touched the ball in with his hand [against England in the quarter-final] – the ‘hand of God’ – Maurice stood up, picked up the television and threw it through the front window. So I think when he sensed injustice he was quite a fighter. Very competitive, too.”

Rylance doesn’t often watch his film work but he did see this one, at a premiere at the Royal Festival Hall in London, where he sat between Maurice’s surviving son, Gene, and his grandson.

“And they went quiet, they laughed, they cried,” he recalls. “They were very happy with the film. Certainly they liked me enough to say they were happy, but I think they were happy.”

Does that mean even that critic friend of yours might concede you got Maurice right?

“I got certain aspects of him,” he says with a smile. “Yeah.”

The Phantom of the Open is now showing.