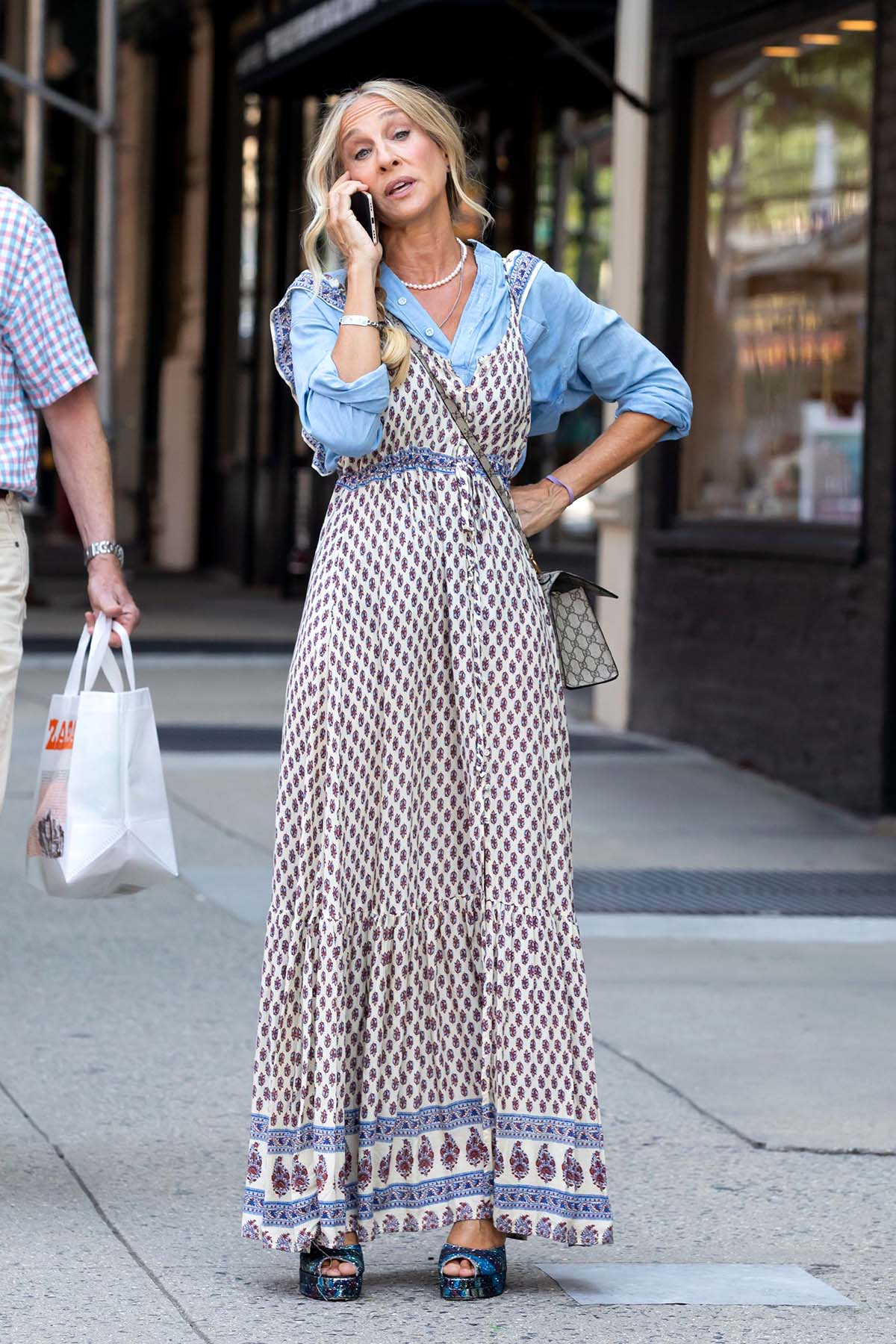 Fashion faux pas! Sex and the City fans got worked up into a major tizzy after Sarah Jessica Parker was spotted wearing a floral maxi dress, which was mistakenly identified as Forever 21, while filming And Just Like That.

But here’s the good news: it turns out that the dress wasn’t fast fashion after all. In fact, the patterned frock is actually from a brand called Raga, which is sold at Anthropologie, Nordstrom and Mode Sense.

“@SarahJessicaParker as Carrie Bradshaw wearing our Avah Ruffle Strap Maxi Dress. #SJP shows off in her boho chic ensemble for the SATC revival ‘And Just Like That,’” the brand captioned a Sunday, August 1, Instagram post.

The dress is sold out (surprise, surprise), but originally retailed for $145. It was available in both ivory and pink color ways.

“So it’s not a F21 dress. I was about to say, not SJP,” a user commented on Raga’s post. “Soooo this isn’t a forever 21 knock off?! Everyone was SO convinced …. self included,” another person chimed in.

“Thank god it’s not forever 21,” someone else said, while another user wrote: “Debunked & not F21. Formally publishing my retraction.”

This identification came as a surprise — and a huge relief — to die-hard fans that couldn’t fathom the one and only Carrie Bradshaw would be shopping fast fashion.

Sex and the City Revival: What We Know About And Just Like That

Rewind a few days and twitter was in a full blown freak out mode. “Y’all. I’m nervous about the new Sex and the City. they got Carrie in a Forever 21 paisley maxi dress and Gucciaga bag,” someone tweeted at the time.

Another person said: “So you mean to tell me that THE Carrie went to see THE Natasha wearing a Forever 21 dress? Ok … who’s the wardrobe stylist on the set cause y’all done LOST YOUR MINDS.”

Bradley! Heidi! Look Back at the Most Unforgettable SATC Cameos

Maxi dress madness aside, it’s safe to say that the HBO Max reboot will feature some fabulous fashion — including some subtle style reference from episodes past.

Last month, Parker was spotted on the streets of New York City wearing the purple sequin Fendi baguette bag she originally carried in season 3 of the show, a studded belt that first appeared in the 2008 Sex and the City movie and, of course, Manolo Blahnik pumps.

While filming on August 2, she was photographed in a Carolina Herrera ivory polka dot skirt, silver pumps and a beret to boot.

Ac, Didn't, Jessica, Parker, SARAH
You may also like: