Many of us are midway through school holidays and if your kids – and you – are in need of some light entertainment that requires minimal effort, we’ve got some suggestions. Below, our TV and film critics have compiled the best shows and movies to watch with your children, from the new Pixar film to SpongeBob SquarePants’ movie to the Billie Eilish doco and more. There’s something for everyone. 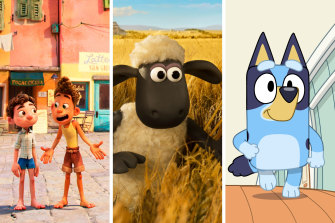 Perfect for the little ones: from left, Luca, Shaun the Sheep: Farmageddon and Bluey. Credit:

Luca, PG, Disney+
Pixar’s animation, Luca, looks initially like an upbeat variation on The Little Mermaid. Luca, a teenage sea monster who yearns to experience the world above the water. His parents warn him off, but a new friend urges him on. The film is not destined to become one of Pixar’s classics but the fashionable message about the virtues of open-mindedness and inclusiveness is never permitted to get in the way of the pratfalling. It has lots of verve and the diligence of Pixar’s researchers has paid off in the evocation of its setting, the Italian Riviera. Sandra Hall. Read her full review here.

Shaun the Sheep: Farmageddon, G, Netflix
Shaun’s home at Mossy Bottom Farm is about to become the landing site of an alien space ship. The country is in uproar and MAD, the Ministry of Alien Detection, springs into action, sending out a Hazmat team under the control of the fearsome Agent Red.Animation studio Aardman’s puppeteers, animators and editors are experts when it comes to a single, well-timed gesture. Never mind about the words, Shaun’s body language is all that he needs to win you over and raise a laugh. It helps explain his appeal for young and old. Sandra Hall. Read her full review here.

Bluey, G, ABC iView
It’s not even legal to write an article about kids’ TV without mentioning this cartoon juggernaut that has charmed the world and caused just as many parents to become obsessed as kids. About the escapades of an ordinary family of talking Australian dogs, it’s smarter and funnier than any kids’ show has a right to be, and teaches all the right lessons. Ben Pobjie.

Barbie: Life in the Dreamhouse, G, Netflix
OK, so hear me out. At first glance this seems like the kind of thing you want to steer your young ’uns well away from, but if you give it a chance you will discover that, not only is it a colourful and boisterous way to keep a tiny one mesmerised for a bit, it’s actually a genuinely funny and smart send-up of reality TV – and grown-ups can have it on for hours without losing their minds. Barbie making intelligent satire: who’d have thought? Ben Pobjie. 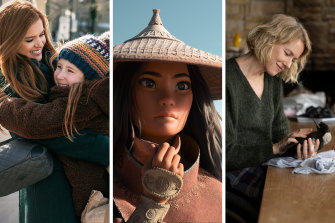 Entertaining for kids and adults alike: Godmothered, Raya and the Last Dragon and Penguin Bloom. Credit:

The SpongeBob Movie: Sponge on the Run, PG, Netflix
What needs to be said about SpongeBob Squarepants, everyone’s favourite buck-toothed, boggle-eyed, highly absorbent undersea burger cook? His latest colourful adventure follows him on a quest to rescue his beloved sea snail Gary from the clutches of King Poseidon – a plot which is typically frenzied nonsense, though the climax that puts our hero on trial for his life may be a bit much for his youngest fans. Jake Wilson.

Julie and the Phantoms, PG, Netflix
It’s the classic story: girl meets ghosts, ghosts and girl start band. It’s a sweet and sentimental wish-fulfilment fantasy for tweens featuring an array of catchy songs. The adventures of Julie, who becomes a star, carry all the usual parentally sound messages about chasing your dreams and being yourself and kissing ghosts and so forth. Ben Pobjie.

We Bare Bears, PG, Stan
Follow the surreal adventures of three bears trying to fit into human society, a task made easier by the fact that these are the kind of bears who can talk and are toilet-trained. It’s extremely silly and all the better for it: animated lunacy with enough of a comedic edge that more worldly kids won’t be bored by it. Ben Pobjie.

A Whisker Away, PG, Netflix
You’ve heard of puppy love? The plot of this gentle animated romance is “boy meets kitten,” the kitten being a classmate who magically transforms herself to get close to her crush. Not so much for younger children, but animal lovers nearing adolescence may be captivated even if they’re not already confirmed anime fans. Available both in the original Japanese (with subtitles) and an English-language dub. Jake Wilson.

Raya and the Last Dragon, PG, Disney+
Raya, Disney’s first Southeast Asian Princess, has a highly developed social conscience. She’s out to revive a world ruined by a malign force which takes the form of a noxious cloud of great efficiency. It has managed to transform much of Raya’s world into a desert and turned thousands of its people to stone. The tone is a lot lighter than in Mulan or Frozen and the design has great ingenuity, as well as being remarkably beautiful. Predictable but fun. Sandra Hall. Read her full review here.

Penguin Bloom, PG, Prime Video or Apple TV+
This is one is strictly for older children because of the unapologetic seriousness of its theme. But it has humour, heart and a highly optimistic ending. Naomi Watts stars as Sam Bloom, a Sydney woman whose back was broken in a fall from a hotel balcony at a Thai resort in 2013.

During Sam’s rehabilitation, her oldest son finds a baby magpie on the beach and brings it home. As Sam watches it grow, she opens up to the possibility that her own life’s limits may not be dictated by her wheelchair. Sandra Hall. Read her full review here. 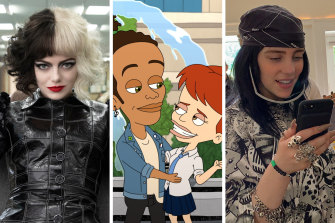 For the older kids (or even just the adults): Cruella, Big Mouth and Billie Eilish: the World’s a Little Blurry. Credit:

Cruella, PG, Disney+
Australian director Craig Gillespie’s revisionist take on the life of the irrepressibly wicked Cruella de Vil, scourge of the 101 Dalmatians, is fun for adults and older children. Its setting – an extravagantly realised 1970s London – concentrates on the era’s extremes in fashion and pop culture and the script has a welcome touch of acid, provided by another Australian, co-writer Tony McNamara. Sandra Hall. Read her full review here.

Billie Eilish: The World’s a Little Blurry, M, Apple TV+
Follows the biggest noise in pop since Justin Bieber, on tour in Europe, the US and Australia and at her family home in Los Angeles, as she writes sad songs with her older brother Finneas. Eilish is intense, brooding and soulful – it’s a sponsored documentary, backed by her record company, but still revealing. Paul Byrnes. Read his full review here. 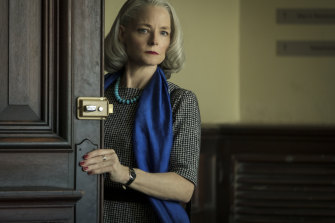 The Mysterious Benedict Society, PG, Disney+
This wholesome, quirksome romp, in the tradition of A Series of Unfortunate Events, sees Tony Hale and Kristen Schaal ham it up as the adult foils to the young leads in the tale of four gifted orphans who are recruited to save the world from dastardly villains. Ben Pobjie.

News of the World, M, Netflix
Tom Hanks as a Civil War veteran who reads the newspapers to the poor and illiterate in the badlands of West Texas. He tries to help a 10-year-old girl, who was abducted by Comanches. A textured reworking of John Ford’s classic western, The Searchers, it’s savage in parts, so suitable for older teenagers. Paul Byrnes. Read his full review here.

Bill & Ted Face the Music, PG, Stan or Prime Video
As teen metalheads, Bill and Ted (Alex Winter and Keanue Reeves) were the anointed saviours of the human race – but the long-awaited third instalment of their adventures is the story of a generational handover, with their respective daughters carrying on the family tradition of good-natured dopiness. The core elements of the series are intact, including complex time-travel shenanigans and a faith in the importance of being excellent to each other. Jake Wilson. Read our full review here.

Adolescents, PG, Prime Video
Shot over five years in central France, Sebastien Lifshitz’s observational documentary follows two friends from contrasting backgrounds, Anais and Emma, as they deal with a range of matters that arise in the course of growing up: career choices, dating and sex, conflicts with parents, developments in wider society. There are ordinary events, and highly dramatic ones – and in general, plenty for viewers to talk about. Jake Wilson.

The Truth About Investor Tom Barrack

First dates are among the top 30 most stressful situations, research reveals