One of Hollywood’s most in-demand action directors is setting up shop in Australia with the ambition of bringing a rolling slate of big-budget genre productions to the country.

Patrick Hughes, the Australian director of The Hitman’s Bodyguard and The Hitman’s Wife’s Bodyguard, has launched a new company, Huge Film, in partnership with Greg McLean (Wolf Creek) and James Beaufort. McLean will serve as executive producer, with Beaufort as Hughes’s co-writer. The team will be based in Melbourne. 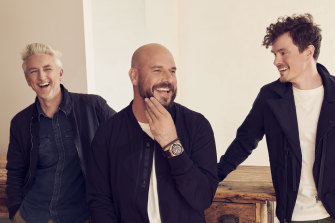 Action movie director Patrick Hughes (centre) is setting up shop in Melbourne, with three features already in the pipeline. His partners in Huge Films are Greg McLean (executive producer) and writer James Beaufort.

The first production from Huge Film (a mispronunciation of his surname that also describes the kind of movies he makes) is the sci-fi action thriller War Machine, which was announced in November. The second, a Netflix thriller called The Raid, has been announced today, with action maestro Michael Bay (Armageddon, The Rock, Transformers) producing.

Also in development is a third instalment in The Hitman’s Bodyguard franchise.

For Black Rock-born Hughes, who self-financed his first feature, the Omeo-set modern-day Western Red Hill (2010) before being enlisted by Sylvester Stallone to direct The Expendables 3 (2014), setting up shop on home ground is the realisation of a dream decades in the making.

“For the past 22 years I’ve worked all around the world, shooting commercials and then movies,” he says. “Now I feel like I’ve reached a new stage in my career where I’ve got a bit of sway and I can say, ‘this is where I want to work’.” 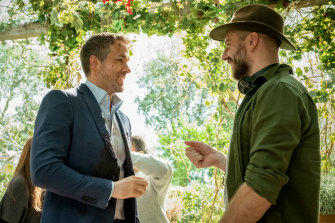 Hughes and Ryan Reynolds on the set of The Hitman’s Wife’s Bodyguard.

Hughes lauds the combination of federal and state government incentives that have made it feasible for the kind of Hollywood-financed big-budget films he directs to be made locally.

“For the first time in my career, Australia’s location incentives are globally competitive, so making big-budget action movies on my home soil is now a viable reality,” he says. “I’ve never before been able to drive to work, and to come home and say to my kids ‘how was your day’. This is the dream for me.”

Hughes and McLean (who produced Red Hill) date their friendship back to 2001, when as a pair of student filmmakers they found themselves in the same St Kilda bar on New Year’s Eve with just $5 to their names.

Over the one beer they could each afford before heading home they swore they would one day make it. With Huge Film, they look to have made good on that commitment.

In announcing War Machine in the Hollywood trade press in November, Erin Westerman, head of production for Lionsgate (the mini-studio behind the Hunger Games franchise, and the producer of War Machine), described Hughes as “simply one of the best action directors working today”.

He is certainly one of the busiest. His latest film, The Man From Toronto, starring Woody Harrelson and Kevin Hart, will be released in cinemas in August.

Although locations for War Machine, which is likely to cost more than $US80 million, are yet to be revealed, this masthead understands it will be shot in New Zealand, with some studio scenes and all post-production to be based in Melbourne.

Locations for the Netflix action thriller The Raid are also yet to be confirmed, but Hughes has had plenty of time to put his mind to it. In 2014, he told this masthead that the remake of Welsh director Gareth Evans’s 2011 film set in an Indonesian high-rise was to be his next project, following his Hollywood debut with The Expendables 3.

But Hughes and the studio parted company over differing visions for the film: they wanted a straight remake, while he wanted to explore the world of undercover Drug Enforcement Agency operatives. The version of The Raid Netflix has commissioned will reflect that. 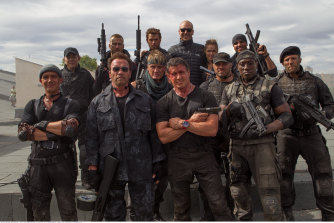 The all-star cast of The Expendables 3, Hughes’ first foray into Hollywood.

“The one great thing that came out of that initial development process was the research,” he says. “I got to hang out with several ex-SEALs and various undercover units and I became so fascinated with the world that I ended up writing a treatment for a movie called Flip (I love how they flip informants and climb the syndication ladder).

“Then, last year, the rights to The Raid became available again and I started a conversation with [Michael] Bay. I told him I felt I had a take that would take the spirit of the original and project it into a broader universe. Basically, I folded Flip into the spirit of The Raid, setting the stage for the potential of an epic saga.”

And if things go according to plan, Hughes hopes Huge Film could be a saga in its own right, one that brings millions of dollars of production and thousands of jobs to the country he can finally call both home and workplace.