Follow
Home » Lifestyle » There was a vial colonial ploy: the shameful history behind Firebite’s vampires

Like many a crazy-great idea, Firebite was hatched over a beer.

While necking a cold one, Warwick Thornton, the prolific writer-director-cinematographer best known for Samson & Delilah and Sweet Country, told his mate, Brendan Fletcher, he’d read that the surgeon on the First Fleet brought vials of variola – the virus that causes smallpox – with him to Sydney Cove.

“Who brings smallpox to a barbecue? ‘We just thought we’d bring it along, with the coleslaw and the sausages’,” Thornton says mockingly. “I thought, ‘this is an important piece of historical information that isn’t taught in our history books’, and I got really angry. And when I get angry I turn it into energy.” 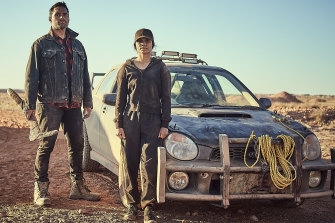 Fletcher and Thornton had worked together on the documentary We Don’t Need a Map, which explored the differing relationships of white and black Australians to the Southern Cross. Together and separately, they’ve been telling stories about Indigenous Australia for decades (Fletcher, who is not Indigenous, wrote and directed the 2011 feature Mad Bastards). But in this nugget of information was the seed for something completely different for both of them: a vampire action adventure set in the outback but obliquely, allegorically and comically about the history of colonisation.

Debate has raged about whether those variola samples, which were ostensibly intended to inoculate the colonialists against the disease, were deliberately or accidentally released into the Aboriginal population; either way, the results were devastating

“Brendan and I have made so many worthy films, and they’re really important to the structure of the Australian psyche and society, but it was time to get a much broader, bigger picture happening,” says Thornton. “I could make a film about 1788 and these 11 vials of smallpox, but I don’t think many people would watch that. So the thing was ‘how do we represent those vials of smallpox’, and the idea was, ‘well, let’s make it 11 vampires’. And that’s kind of where it started.” 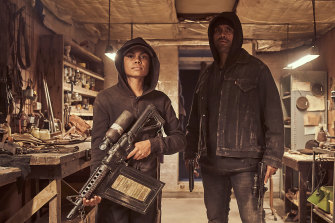 “It gives us incredible licence,” adds Fletcher, who suggests the eight-part series, which launches streaming service AMC+ in Australia and marks the US company’s first local production, works a bit like a Trojan horse. At one level, “we just want to entertain, make something fun and cool and arresting”. But at another, he says, “in every minute of this show, there’s truth”.

Firebite stars Rob Collins as Tyson and Shantae Barnes-Cowan as Shanika. He’s a larrikin, a ladies man and a bit of a louche, and he’s been her surrogate father since her mother went missing, presumed taken by the vampires that live in the network of tunnels 30 metres beneath the surface in the desert outside the opal mining town of Coober Pedy.

The vampires, whose leader is played by Callan Mulvey, come out only at night (obviously) and dress and act like a bunch of cool Melbourne goth rockers in town to shoot a video circa 1986 (if Russell Mulcahy pops up in a cameo, don’t be surprised). The twist is they have a particular taste for Indigenous blood.

Usually cast as an upstanding, reliable, level-headed figure, Collins has a ball playing borderline-crazy Tyson (his car echoes Mad Max’s Interceptor, though his demeanour is more Lethal Weapon-era Mel Gibson). “I love Tyson and I think the reason I love him is the idea that you can find heroism, courage and love in the most unlikely places,” says Collins. “He is a wreck. But he’s a character who’s really loyal and lovable. And he’s a crazy vampire-killing, beer-swilling, father figure wannabe who’s sort of trying to carve out an existence in Opal City.”

At 18, Shantae Barnes-Cowan is an actor on the rise (she was the runaway teenager in season one of Total Control). But while she was excited by the prospect of working with Thornton, she wasn’t initially convinced Firebite was for her. “When I found out about the audition, I was a bit iffy about it because it was, like, vampires,” she says. “But when I got the role … it was good to get that whole backstory. It makes me more proud of my culture.”

The landscape around Coober Pedy is a vital character in this tale. And as you’d expect from Thornton, who was cinematographer on the series as well as director on four episodes (Fletcher directs two, with Tony Krawitz picking up the other pair), it is lovingly and beautifully shot.

Though the tunnel sequences were filmed in a studio in Adelaide, the bizarre pock-marked landscape you see up top is entirely real.

“They have dug so many holes there, there are literally thousands and thousands of abandoned mine shafts,” says Fletcher. “When you fly in, it’s like this crazy Swiss cheese block; it really makes sense that vampires would be there.”

There are, by some estimates, as many as a quarter of a million abandoned mine shafts in the area; one of the town’s signs shows a stick figure with a camera teetering on the edge of a hole, with the words “don’t walk backwards” above it.

The whole place is “perfect for vampires,” says Thornton. “You sleep all day. You pretend you’re a miner, at night you get up and go to the pub in your hi-viz. They’re FIFO [fly-in, fly-out] vampires.”

Making Firebite has been no fly-by-night exercise. Thornton and Fletcher wrote their first draft of the pilot in 2014, and while sharing a house together in Newtown the following year, they developed the entire series on a whiteboard in their kitchen.

That’s when See-Saw’s Australian head Emile Sherman came on board. The show is a step out from the kind of high-end prestige product (The King’s Speech, Lion, The Power of the Dog) the company is known for, but it makes sense, Sherman insists. “We don’t want to make things that are run of the mill. This obviously pushes the boundaries of what we’ve done in the past, but in the best way possible.”

Firebite has been through many iterations since then – “during development it became very serious, then it became all slapstick,” Fletcher says – but in some ways it couldn’t have happened until now.

“In a way we had to wait until the streaming world caught up with this kind of story,” says Sherman. “Six or seven years ago, it would have been hard to make this, with a largely Indigenous cast at the budget level we did. It either had to be a $100 million massive show or an ABC show [on a much lower budget], and we didn’t want to make either. Now there’s a place for these shows, which is really exciting.”

AMC+ is the direct-to-consumer streaming service just launched in Australia by AMC, the cable network behind Mad Men, Breaking Bad and The Walking Dead. And given the longevity of those series – and the spin-offs the last two have spawned – it’s fair to say AMC is hoping Firebite will burn brightly well beyond a single season.

“Warwick and Brendan are incredibly gifted storytellers who have created a rich and immersive world that feels fresh, especially within a popular genre,” says Courtney Thomasma, general manager of AMC+. “In that sense, there are some interesting parallels with The Walking Dead – stories of survival that explore themes of community and humanity.

“Right now, we’re laser-focused on launching this season as successfully as possible,” she says. “But there’s certainly a lot of story to tell given the richness of this world and its characters.”

Firebite is on AMC+ from December 19 (subscriptions via Apple TV or Amazon Prime Video for $8.99 a month)

Women moderate what they want out of life as they age, survey finds