Best England football song – You decide in our Euro 2020 poll

This weekend England fans witnessed the national team triumph over Ukraine in a stunning display. The Euro 2020’s quarter-finals ended with Kane’s boys winning 4-0 to line up a semi-final clash with Denmark on Wednesday. At 8pm Gareth Southgate’s side go up against Denmark in the semi-final, and they will need all the support they can get from England fans – and what better way than to chant one of the country’s legendary songs?

With so many iconic tracks to choose from, scroll down to have your say on which song is the best in our poll.

When football fans are keen to show their support for England at the World Cup or the Euros, they would be hard-pressed to not think of David Baddiel and Frank Skinner’s legendary 1996 anthem.

The comedy duo worked with The Lightning Seeds’ Ian Broudie to write the track to commemorate the 1996 Euros which was hosted in England – the first time since 1966.

England was knocked out in the semi-finals after playing Germany. The teams drew 1-1 and went to penalties, which the Germans won 6-5.

Is Three Lions (Football’s Coming Home) your favourite football song? Vote in the poll at the bottom of this article. 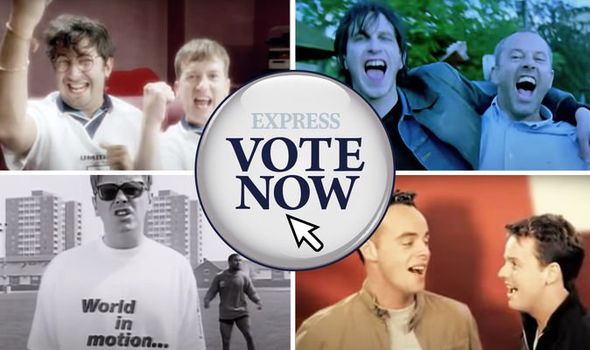 The track was written and released to commemorate England’s participation in the 1998 World Cup.

The iconic song is instantly recognisable and utilises the timeless “nah nah nah”s that are still screamed in football stadiums to this day.

The anthem reached number two in the UK Singles Chart. However, it was just beaten by Three Lions ’98, the revitalisation of the Three Lions (Football’s Coming Home) song from two years prior.

Is Vindaloo your favourite football song? Vote in the poll at the bottom of this article.

England fans were extremely hopeful during the 2018 FIFA World Cup.

Although England ultimately came fourth in the competition, the support surrounding the team was stronger than ever.

A lot of the encouragement was aimed at England’s waistcoat-clad manager, Gareth Southgate.

The pop hit Whole Again by Atomic Kitten has been adopted as a symbol of support for Southgate.

The lyrics croon: “Looking back on when we first met / I cannot escape and I cannot forget / Southgate, you’re the one / You still turn me on / Football’s coming home again.”

The hilarious track was performed and released by one of Smug Roberts’ personas, Grandad Roberts.

Despite the song originally beginning on Smug Roberts’ comedy radio show on Key 103, it has become a staple chant in almost every football event.

Before being featured in Gavin & Stacey, New Order’s iconic World in Motion changed the game for football anthems.

Not only was it extremely catchy, but it also included a guest rap from England footballer John Barnes.

Barnes has since laid down his historic bars on various occasions, proving that World in Motion is still a contender in the football song world.

Barnes even beat other members of the team to claim the featured spot, including Peter Beardsley, Paul Gascoigne and Chris Waddle.

The song was the anthem for the 1990 World Cup in Italy, which saw England crash out on penalties against old foe Germany.

The Newcastle duo has been a part of TV and music culture in the UK for decades and their 2002 hit We’re On The Ball was another example of their popularity.

The song was a smash hit to English audiences as it reached number three in the UK Singles Chart.

The cheeky tune was the England football team’s “official song” of the 2002 FIFA World Cup.

In their music video for the track Ant & Dec dressed up as then-football manager Sven-Göran Eriksson.

The Farm – All Together Now

The song was written originally about the World War One Christmas truce between German and British troops in the trenches in 1914. It was released back in 1990 and soon become an anthem in clubs up and down the United Kingdom.

Then, in 2004, the song was re-released for the European Championships in Portugal, peaking in the UK Singles Chart at number five – one lower than its 1990 performance.

The song would later be re-worked by Atomic Kitten for the 2006 World Cup.