The 33-year-old RnB star’s 2019 hit is blowing up the charts after going viral on TikTok but its lyrics have also caused confusion on social media among his fans.

AceShowbiz –Chris Brown is finally setting the record straight. The R&B star turned to his social media page to break his silence after his fans were torn over the lyrics of his hit “Under the Influence”.

The singer’s hit “Under the Influence” is blowing up the charts but its lyrics have also caused confusion. Some fans have been singing “F**kin’ Robitussin,” while others thought he was saying “F**king, rubbing, touching” at the beginning of the song.

The confusion even sparked a debate on Twitter. “So Chris Brown ain’t say F**king robitussin ?? He said f**king, rubbing, touching ??” one user who goes by the username @q_withthewaves asked.

The post quickly sparked debate among Chris’ fans. “He said robitussin, cause the next line is takin bout how it got him lazy, and he mention other drugs he can’t do rn,” one person noted. Another echoed, “He said robitussin, and then immediately referenced the symptoms of said drugs. Being drowsiness.” Some others uploaded a screenshot of the lyrics from Apple Music that read, “F**kin’ Robitussin.”

In the replies section, there was also some questioning about whether Chris sings “body light weight” or “body language.” One social media user stated, “What’s more important is that he said ‘Your body lightweight’ INSTEAD of ‘your BODY LANGUAGE’!! Cause wtf do that even mean, @chrisbrown ?!” Another chimed in, “Forget that lmaoooo. I used to sing ‘YOUR BODY LANGUAGE SPEAKS TO ME’ cz Your body ‘lightweight’ speaks to me doesn’t make any sense to me.”

After the tweet went viral with over 100,000 engagements, Chris himself responded by clearing up the air. “They been messing up lyrics lately on these music platforms … YALL BEEN HAVING A FIELD DAY WITH UNDER THE INFLUENCE,” he wrote in an Instagram Story on Monday, November 14. He later revealed that the correct lyrics are “It’s fu**king Robitussin” and “Your body light weight speaks to me.” 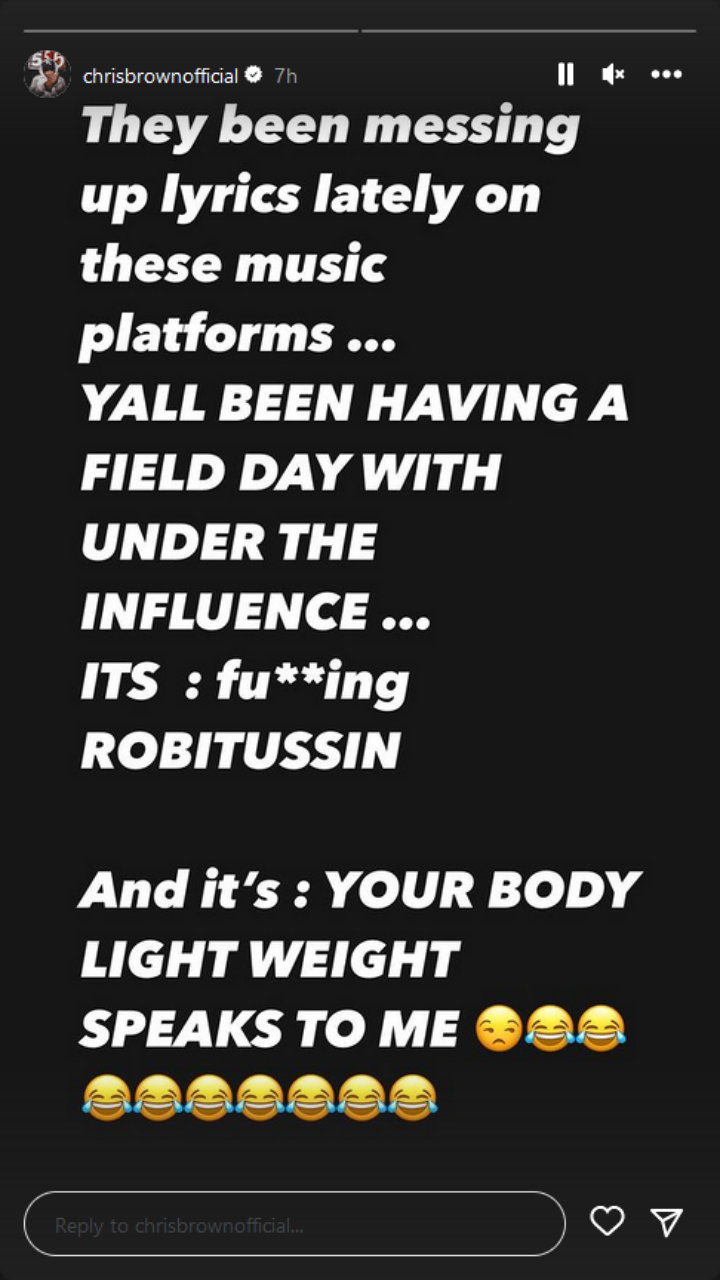 Chris Brown addressed confusion over ‘Under the Influence’ lyrics.

“Under the Influence” was originally included on the extended edition of Chris’ 2019 album “Indigo” but had a resurgence after it went viral on TikTok. Last month, he released an official video for the three-year-old song.

Chris has also announced a tour named after his platinum hit, which is currently No. 21 on the Billboard Hot 100. Starting in February, he will head to Europe on his “Under the Influence” tour.