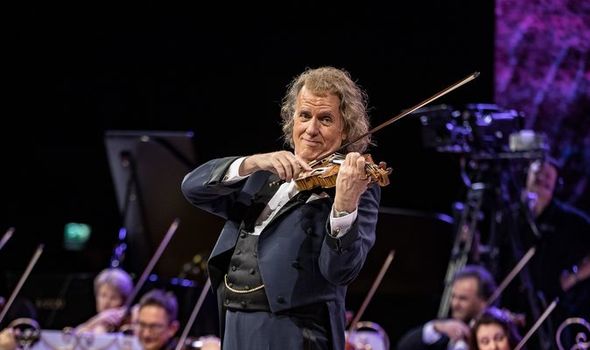 But after two years of restrictions,André Rieu is ready to hit the road again, making both him and his fans Happy Together – the title of his latest chart-topping album – once more. With his 60-piece Johann Strauss Orchestra, the 72-year-old star usually performs to more than half a million people each year, outselling superstars such as Rihanna, Bruno Mars and AC/DC.

Touring is in his DNA and the “Maestro for the Masses”, as he has been dubbed, admits while being confined by lockdown to his small 15th-century castle in Maastricht was not too problematic, he initially struggled with boredom.

He reflects: “It was difficult from one day to another, I was at home doing nothing, not making music with my orchestra. We are normally performing 100 times a year all around the world.

“When I am on tour, I often can’t sleep because of the adrenalin so I started watching baking tutorials on my iPhone, I find them relaxing. Then suddenly, we were at home ‘I’m so proud to see those happy faces’ for weeks on end, and so I had time to bake. I gave cakes to some of my grandchildren who live nearby, then the street heard of my baking, and they were calling out, ‘Hey, you have to bake for me too!’ Then the places where I shop were asking. In the end I felt like I was baking for the whole city!”

André’s passion has kept him touring for more than 30 years and he insists: “Everyone needs music. Music is the art form that goes into your heart immediately. It goes deep into your soul and is joyful and healing.

“When I started with a small orchestra 50 years ago; there were only five of us and we played in elderly homes. It was amazing to see people who had sat in their chairs like plants for 10 years suddenly started to smile, move and dance. Even the doctors asked how we did it.”

” Pragmatic about the length of the pandemic, he says: “In thefirst week I read about all the other pandemics in history, and all of them, apart from the plague, were over in two years. So in my mind, I was prepared for two years. Now we are in November and I start touring again in March, so I think I am right. I hope so. I am really afraid restrictions will happen again.”

André has sold more than 40 million CDs and DVDs in an era where fewer people buy discs, and has charted more than 30 number one hits. His mission has been to make classical music more accessible, and with his 1667 Stradivarius violin, he has turned the waltz from the Viennese ballroom into an international sensation, recently becoming the highest-grossing classical artist in Billboard’s Boxscore history.

“Waltzes are so special – they are a timeless type of composition and will always appeal to people. Mozart and Johann Strauss were the pop stars of their times.” One-off big-screen music events have been a huge draw for cinemas over the past decade and his Maastricht cinema concerts have broken box office records year after year.

THE latest, Christmas With André, hits screens next weekend. It was filmed in his newly created Winter Palace in his hometown. Alongside a cast of hundreds, André will perform traditional carols, romantic waltzes and Christmas classics under snowfall and lights, joined by his orchestra, skaters and dancers, plus guest sopranos Donij van Doorn and Anna Majchrzak.

The violinist’s brand of “schmaltz” divides critics and he has been accused of turning classical music of the European tradition into entertainment for the masses.

He shrugs: “It’s a free world and people are entitled to their opinion. I do my job with all my heart. That’s the only way I can do it. I am surrounded by good musicians and good singers. I’m so proud when I’m on stage and I see all these happy faces.”

” André founded his private orchestra in 1987, and his repertoire includes a mixture of light classics, waltzes, music from film and opera as well as pop songs. Some 50 to 60 musicians, along with singers and other guest artists, go on the road with him each year.

He smiles: “I’m looking forward to coming to the UK. The audiences are the best in the world, the humour is incredible and there is so much laughter when I am speaking between pieces. I love it. I promise my fans that they will have an evening they will never forget.

“Performing keeps me young because I am surrounded by young people in my orchestra. I have missed them so much in the last two years because we couldn’t be together. It was really hard. Four months ago we were able to come together to record my new album, I just said, ‘So, where were we?’ As if we never stopped. The only title of it could be Happy Together. It’s a really joyful CD. Put it on and you will feel happy. It sounds kitsch but it’s true.”

Born in Maastricht, André grew up in a classical family; his father was a symphony orchestra conductor and his brothers and sisters played one or more instruments chosen by their parents. His mother encouraged him to play the violin and started lessons when he was five. His training eventually brought him to the Royal Conservatory of Brussels where he was awarded the Premier Prix.

Now his fame means he lives in a fairytale 1452 castle where real musketeer D’Artagnan was said to have had his last breakfast before he died in battle serving Louis XIV. It’s a castle André used to visit to take piano lessons as a child, but he dreamed of buying and renovating it, which he did about 20 years ago.

His concerts are known as visual treats, from the sight of the violinist and his musicians entering through the crowd, to the lavish costumes and vast screen behind the orchestra displaying beautiful imagery appropriate to each song. His YouTube videos have reached far over a billion views. And every July he takes over Vrijthof Square in Maastricht for a series of concerts.

“Last time we played in the square in the summer of 2019, we had people fly from all over the world; from Fiji, Argentina from everywhere,” he says. “It’s a concert but it’s also a big event and everyone wants to be there and ‘live’ it.”

YET HE insists his lifestyle is modest and he ploughs most of his earnings back into his company and rarely splashes out. “I’m a bit dull. I have a Mercedes but not a swanky one, and I have a big kitchen because I like cooking but that’s not really an extravagance! All the money I earn, I use to make my concerts more beautiful.”

However, André, who claims, “A waltz a day keeps the doctor away”, admits his enthusiasm for his job proved detrimental when it started to affect his health, and about 10 years ago he suffered what he believes was a physical breakdown.

“I was always really healthy. One day, I was lying in bed and suddenly the whole room was turning around and I was scared,” he recalls. “I went to the doctor and luckily it was not my heart, but he said, ‘I think you work a little bit too hard, Mr Rieu’. I listened to him and it worked and over three months, slowly, I got fit.

“Then I overdid it again, but this time I learnt. I pressed a button, reset, and changed my life. I think I am a workaholic, but after that experience I learnt to take better care of myself and relax.

“FOR THE last seven years I’ve done my sports three times a week. I do weights with a personal trainer. It saved my life and I tell everyone to do it. I haven’t drunk alcohol for the last three or four years and I eat well and we grow our own vegetables. I’m 72 and I want to be 140 so I am more than halfway there!”

The musician has two sons, Marc, 42, an artist, and Pierre, 40, who works for André’s company, and five grandchildren. He has been happily married to wife Marjorie since 1975. He recalls: “I was studying in Brussels and had this tiny room and she came to visit me one day. She solemnly said to herself, ‘I’m not going to stay the night with him’. But she did stay. And that was it.”

Yet despite playing passionate and romantic music, he admits: “I’m not romantic. Not at all. A glass of wine by the fireplace? I don’t do that sort of thing. But lovely, thoughtful things for each other? Yes. To me, that’s romance.”

Happy Together is out now. See Christmas With Andréin cinemas nationwide on December 4 and 5. André tours the UK from April 20, 2022. For info visit his website.