Donald Trump's first wife, Ivana Trump has died at the age of 73.

Ivana was the mother of three of Trump's children and married the former president in 1977.

Trump confirmed his ex-wife’s death in a post on his Truth Social platform, writing: “I am very saddened to inform all of those that loved her, of which there are many, that Ivana Trump has passed away at her home in New York City.

"She was a wonderful, beautiful, and amazing woman, who led a great and inspirational life.

"Her pride and joy were her three children, Donald Jr., Ivanka, and Eric. She was so proud of them, as we were all so proud of her. Rest In Peace, Ivana!"

After splitting from Ivana, Trump went on to marry twice more.

Here's everything you need to know about why they divorced and Trump's love life after their marriage.

Why did Ivana and Trump split?

Trump and Ivana were married for 15 years and during that time Ivana held senior positions within the Trump Organisation.

But during their marriage, Donald was reported to have had multiple affairs.

When asked whether he and Ivana were monogomous by Playboy in 1990, he responded: “I don’t have to answer that. I never speak about my wife – which is one of the advantages of not being a politician. My marriage is and should be a personal thing.

“I think any man enjoys flirtations, and if he said he didn’t, he’d be lying or he’d be a politician trying to get the extra four votes.”

Their marriage finally broke down when it was revealed publicly that Trump had been having an affair with actress and model Marla Maples.

What followed was a messy divorce that saw the pair making headlines regularly as they had a bitter settlement feud.

Their divorce was finalised in 1992 and according to the New York Times Ivana was granted a $14m (£12.8m) payment, a mansion in Connecticut, an apartment in Trump Plaza, and one month a year at Trump’s Mar-a-Lago club in Palm Beach, Florida as part of the settlement. 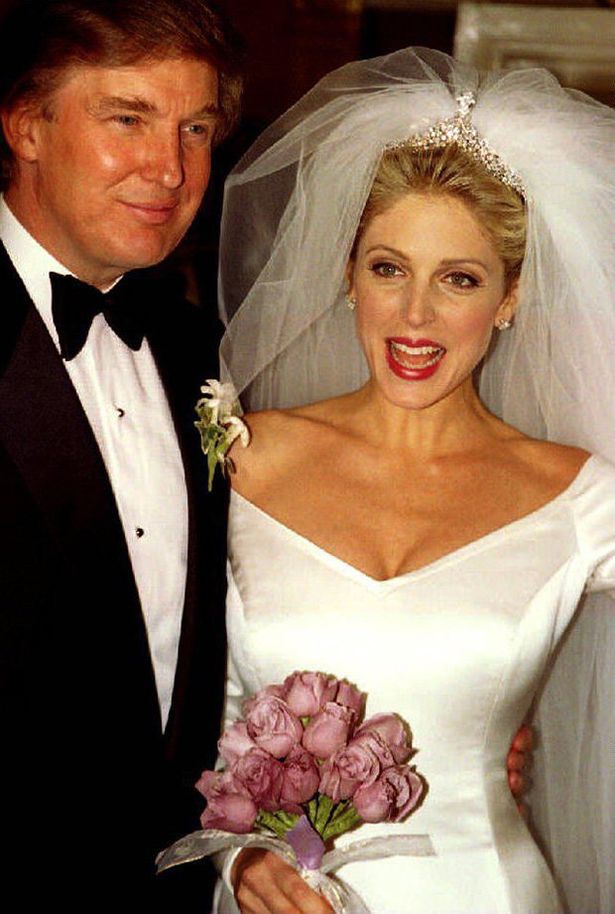 A year after Trump's first divorce was finalised he welcomed a baby with Marla Maples.

Tiffany Trump was born in October 1993 and two months later Trump and Maples tied the knot.

In her 2017 memoir Raising Trump Ivana wrote about Trump's second marriage, saying: “After the showgirl got pregnant and had a daughter, Donald married her.

"The whole world was watching. He couldn’t not wed the mother of his new baby, regardless of whether his heart was really in it.”

Their marriage only lasted four years before they split in 1997 and their divorce was finalised in 1999.

Reflecting on their time together to Access Hollywood, Marla said: "We're so different.

"I came from Georgia and family values and a strong sense of spiritual growth, always wanting to be the best I can, and he came with his positive ability to see the world and make money, get out there, and so I think in a marriage you always hope you'll bring out the best in each other, but after many years, we realised we weren't." Trump and Melania first met in 1998 at a party thrown by their mutual friend Paolo Zampolli.

When they met, Melania was working as a model in New York after immigrating to the US from Slovenia in 1996.

After meeting the pair began dating on and off.

But in 2004 they rekindled their romance and Trump asked Melania to marry him.

After their engagement, Melania told the New York Post: "It was a great surprise. We are very happy together."

In 2005 Trump and Melania got married in a lavish ceremony at Trump's Mar-a-Lago estate in Palm Beach, Florida.

A year later the couple welcomed their first son together, Barron Trump.

Barron is Donald Trump's fifth child and is 13 years younger than the sibling closest in age to him.

In January 2018 reports of an alleged affair and pay off between President Trump and adult-film star Stormy Daniels broke.

Daniels claimed that her and Trump had had an affair in 2006, shortly after his son was born.

But the allegations didn't cause a breakdown in their marriage and when she was later asked whether she loved Trump in an interview for ABC, Melania said: "Yes. We are fine. Yes."