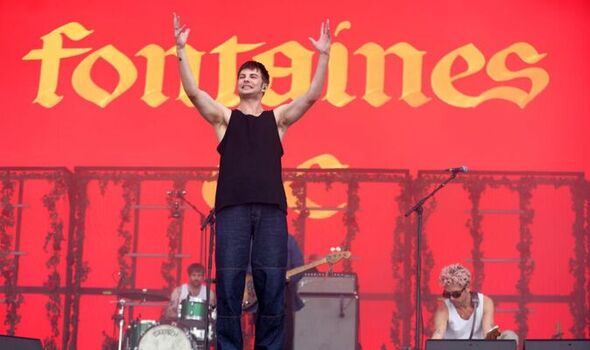 The young Dublin quintet have had a triumphant rise, with their third Album Skinty Fia released this year hitting number one, a fierce Glastonbury set and winning the NME “Best Band in the World” award.

True to form, their response to winning the award was a succinct “about time”. With a 3 night sold out stint at the Hammersmith Apollo they show that this wasn’t just bravado, and that they have climbed to the top without losing any of their shambolic charm.

Launching into their set with A Hero’s Death it was clear the stewards would be very busy with crowd surfers tonight, as the crowd swelled forward to greet their heroes.

Ireland is never far away both on stage, with a giant tricolour flag on the speaker, and the lyrics and singer Grian Chatten’s heavily accented drawling vocals.

Grian is not a traditional frontman, with barely a cursory “Cheers” to the audience, lurching across the stage in his oversized T Shirt and combat trousers, but he is a a mesmerising figure nonetheless- giving off baggy Ian Brown vibes when shaking his tambourine.

The band’s poetic lyrics are spat out at high speed, rattling through the set with barely a breather. Skinty Fia is a highlight, referring to an Irish phrase which translates as “The damnation of the deer”.

The album’s cover art features an Irish red deer, an extinct species looking lost in the artificial red glow of a hallway, a powerful representation of the band’s complex relationship with their Irish identity.

A brief break before the encore gives the crowd a chance to catch its breath, while the band’s name Fontaines “Dublin City” glowed in the colours of the Irish flag above the stage.

Boys in the Better Land from their first album Dogrel gets the Apollo shaking again with the crowd singing along “With a face like sin and a heart like a James Joyce novel”, a song written about Grian’s chance encounter with an Anglophobic Dublin cab driver.

Set closer I Love you shows the band at their complex best, with its unusually both downbeat and upbeat tone “If I must have a future, I want to with you”. The future is shining bright for these boys.