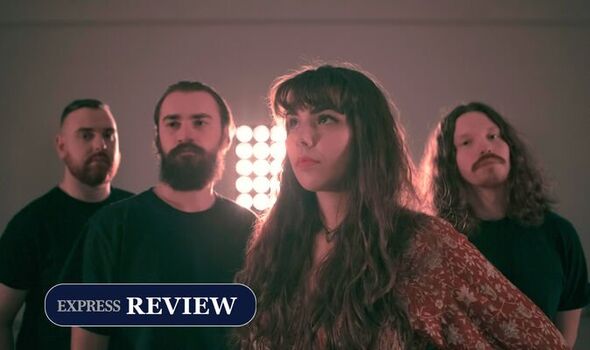 For lack of a better term: Prog rock is totally, absolutely not my thing. I’ve never been able to get on with it and have mostly found it repetitive and drab and bogged down with some needlessly elongated songs that, crucially, don’t have much to them (except weird riff rhythms).

Whatever your take on prog rock, or – I don’t know – alternative metal at all, Giant Walker delivers a perfect example of how to stand out from the crowd while blending through a few genres with their first record.

Giant Walker’s debut album, All In Good Time, has only been out for a couple of weeks, but it seems to have stuck in my rotation.

Although the band haven’t been around for too long, their compositions and production are extremely reminiscent of bands far more tenured than them.

The quartet hail from Newcastle and show that the metal scene does not begin and end in the south. And while, usually, albums like this might quickly be shown the door, Giant Walker’s spellbinding rhythms (The Fact in Fiction, Coda) are completely enticing and chemically addictive.

From the get-go, guitarist Jamie Southern, bassist Jordan Gregory and drummer Alex Black are like a relentless sound storm that demands attention. And every listen further shows off the layers of subtleties and power flowing through each bar.

But hardcore riffs and surefire displays of immensity are not all Giant Walker can do – not by a long shot.

The real attraction here is vocalist Steff Fish, whose soaring, breathtaking vocals are incredible from front to back. Throughout the nine-track album, she encompasses almost every facet of her vocal range: from a yearning call to action to a shriek that will leave your arm hairs standing on end.

Steff truly has a unique voice that, once combined with Giant Walker’s nuanced musicality, is personified into something superhuman – almost siren-like. And, boy, does she have some power. She proves this best in Podha where she obliterates your run-of-the-mill singers from any other band by reaching seemingly unfathomable notes.

Similarly, Katoomba’s ruthless chorus displays a glorious falsetto that is just perfected by the band’s destructive demolition charges behind her voice.

Giant Walker are not all chaos and catastrophe on All In Good Time, however.

Some of the more picturesque adventures from the band (Past The Peak) easily blend into soundtrack territory. Like Evanescence with more technicality or Muse with a good singer; they are confident in their craft and it is infectious.

Perhaps that’s what makes them so enjoyable to listen to: a real sense of confidence and purity in their craft.

Giant Walker’s debut album is, basically, as good as it gets. The up-and-comers not only embody – as well as progress – the prog rock genre (if that’s something you care about), but completely turn it on its head. The power of their music and their vocals create songs that would fit right into any playlist – and the exceptionally catchy melodies are what you’ll find yourself singing to yourself for days to come. Giant Walker are the next big thing and you need to start paying attention now.

Giant Walker – All In Good Time is out now.