How Did Travis Barker And Kourtney Kardashian Really Meet?

If you had told us a year ago that Travis Barker and Kourtney Kardashian would be one of 2021’s hottest couples, we would have been just a tiny bit skeptical. Let’s face it: the heavily tattooed Blink-182 drummer and glamorous “Keeping Up With the Kardashians” star seem like polar opposites — like, what would they even talk about?

That being said, with the rest of the world also looking nothing like it did a year ago, perhaps we should have seen this one coming. After all, the pair actually share a few significant things in common. Both are former reality show stars, both have split from long-term partners (Scott Disick and Shanna Moakler, respectively), and both are devoted to their kids. Plus, it turns out that Barker and Kourtney hooking up isn’t quite as random it may seem.

In fact, these two go back … as in way, way back. So, how did the two love birds actually meet? Read on to find out where Barker and Kourtney’s epic love story first began. 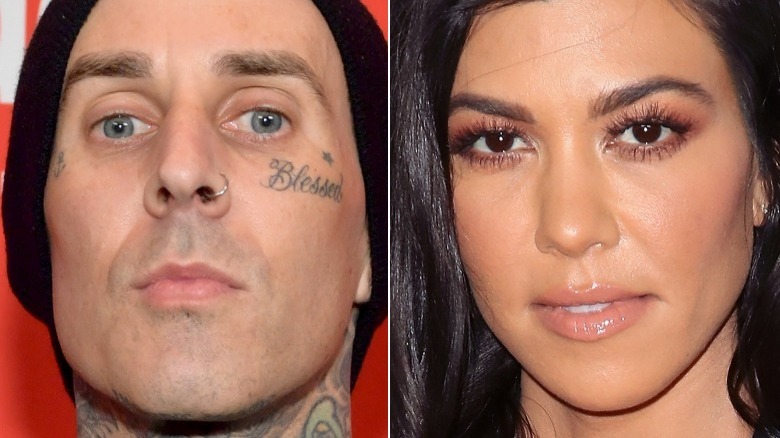 Travis Barker and Kourtney Kardashian’s journey thus far has certainly been drama-filled. Marked by shady comments from exes, PDA-filled date nights, and loved up Instagram posts, these two have barely been out of the news since they made things Instagram official in February 2021, per US Weekly. However, before they were making global headlines, the power couple were just a couple of friends. In fact, their friendship spans more than a decade — but let’s rewind. Their love story started as all the great ones do … with Paris Hilton.

Per US Weekly, in 2006, Barker was “hooking up with” Hilton. At the time, Kourtney’s sister Kim Kardashian was Hilton’s assistant. Barker was apparently quite taken with Kim, asking US Weekly in 2015, “How could you not stare at Kim?” He added, “Kim was eye candy. I was no way disrespectful to Paris, but I couldn’t keep my eyes off Kim!” While the rocker has since shifted his gaze to a different Kardashian sister, it seems like this first encounter sparked an enduring friendship with the family. Barker even appeared on a 2017 episode of “Keeping Up With the Kardashians” shortly after he moved to the same gated community as Kourtney in Calabasas, Calif.

Though the pair have been spotted together many times over the years — sparking dating rumors as early as 2018 — it’s only after they began flirting on social media that the rumors started flying. These days, Barker and Kourtney seem smitten and happy.

And, Barker, Did, How, Kour, Travis
You may also like: