Jesse McCartney is updating fans about his upcoming nuptials. The “Beautiful Soul” singer has kept a relatively low-key profile for the past few years, focusing on recording his new album and spending time with his fiance Katie Peterson. McCartney, though, did surprise viewers when he appeared on Season 3 of “The Masked Singer” as the Turtle, where he reminded them about his outrageous vocal chops.

McCartney first got his teenage heartthrob status when he joined pop boy band Dream Street in 1999 (while simultaneously starring on the soap opera “All My Children.”) The band disbanded in 2002 and McCartney went on to pursue his solo career, releasing his debut album, “Beautiful Soul” two years later. Since then, McCartney has enjoyed steady success in Hollywood, releasing Top 10 hits and voicing television series and movies such as “Young Justice” and “Alvin and the Chipmunks,” per IMDb. But McCartney is about to get busier as he’s going to be suiting up for the biggest role of his life in the fall. Find out more about his exciting announcement below. 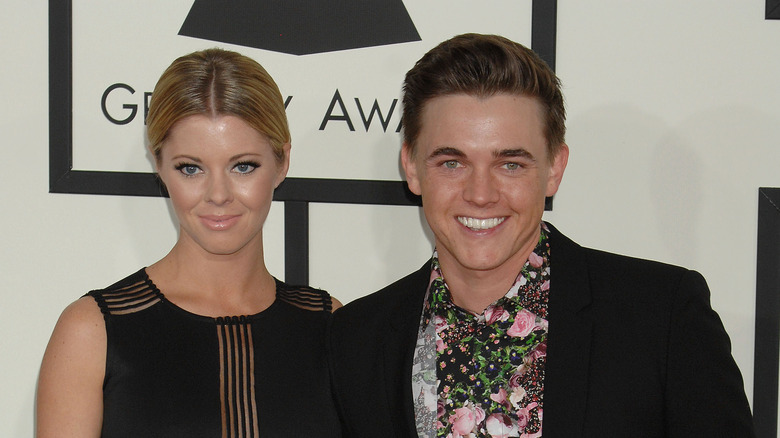 Jesse McCartney may have successfully attracted a legion of female fans during his teenage years, but there’s only one woman who he has eyes for in real life — his fiance Katie Peterson. Per People, McCartney and Peterson have been dating since 2012 and got engaged in 2019. They kept their wedding plans under wraps until June 22, 2021 when McCartney uploaded a black-and-white video on Instagram, announcing that he and Peterson will be getting married in the fall.

In the video, which was inspired by Charlie Chaplin/silent films, McCartney and Peterson pay tribute to when they first met — in a bar — before inviting her to the beach where he proposed. “My love for you roars like the 20’s! Won’t you be mine forever?” a title card reads from McCartney. “Yes! But of course,” Peterson’s card replies. The film ends with “Meet us in Carmel Valley. Fall 2021,” before the engaged couple seals their announcement with a kiss.

McCartney, for his part, is excited about becoming a married man, telling People, “At this point, everything feels like it’s clicking into place,” while adding, “I’m looking forward to a whole new stage.”

Exciting, has, Jesse, McCartney, N
You may also like: