Lil Nas X Has Something To Say About His BET Performance

Lil Nas X has already said he’s officially done trying to make straight people more comfortable with his career. So if you’re gonna start getting judgy on the internet, you need to be prepared — because the “Montero” and “Old Town Road” singer will clap back and put you in your place.

For example, when he released his highly-stylized and raunchy music video for “Montero (Call Me By Your Name),” which featured the artist riding a stripper pole into hell and grinding on the devil, some scandalized folks took to Twitter to criticize him. Lil Nas X, who came out publicly as gay in 2019, never once missed a beat when hitting back at some of his conservative critics, including Candace Owens, Kristi Noem, and Kaitlin Bennett. When someone accused him of being part of a “system” targeting children, he replied, “i am not gonna spend my entire career trying to cater to your children. that is your job.”

So when, following his racy performance at the 2021 BET Awards, some Twitter users decided to call him “disrespectful,” it went about as well as you’d expect.

Lil Nas X does not miss a beat 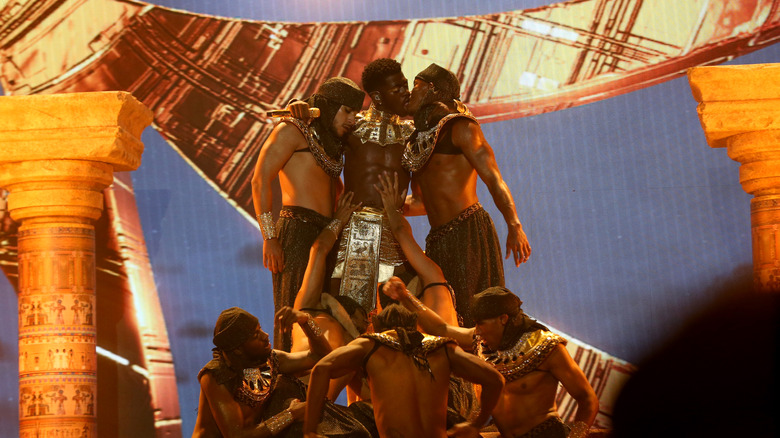 Lil Nas X performed his latest viral hit, “Montero (Call Me By Your Name)” at the 2021 BET Awards, surrounded by shirtless dancers dressed like sexy ancient Egyptians and finished the set by passionately making out with one of the dancers. This earned him a standing ovation by some members of the audience. However, one member of the Twitter commentariat in particular was less than pleased.

One user took to the social media platform to write, “DONT USE AFRICAN CULTURE FOR SH*TS LIKE THIS!!!!!!! RESPECT OUR ANCESTORS.” Unfortunately for this person, they were quickly shut down by the singer himself, who quote-tweeted the message, saying, “y’all really like to pretend homosexuality didn’t exist in african culture.”

Lil Nas X was also swiftly backed up by other commenters and Twitter users who came bearing receipts that LGBTQ+ and queer cultural practices are absolutely a part of ancient African history.

So, to conclude today’s history lesson: homosexuality has never been un-African and Lil Nas X does not miss. Any questions?