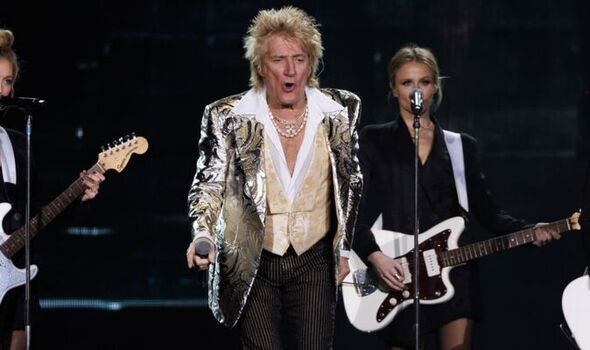 He’s in high spirits as he grins and teases that “He’ll be the main act for this evening”. Rod warns his adoring fans that he is “Going to have a couple of costume changes throughout the evening”, downplaying the fact that he will eventually have seven or eight changes, chuckling that “Now I’ve got the money I like to have nice stuff!”, which has the the whole place howling. A superb rendition of the old Faces favourite Oh La La is a huge hit with the the audience.

A stunning solo from the saxophonist on Some Guys Get All The Luck steals the show early on in the night. Brilliant backing drumming from his beautiful blonde dancers built into the classic Forever Young and got a huge reception. The timeless cover of Cat Steven’s ballad The First Cut Is The Deepest features a phenomenal violin solo that truly wows the punters.

Rod tells a deeply touching story before  Maggie May, he described that when went it to Number 1 in 1971, his visited his mum and dad in their council house and they all had a cry.

Hyping up the crowd in a sudden change of pace he quips that “I’m ready and willing and able” in a lovely aside between songs.

As his hugely talented dancers leave the stage he tells them with his cheeky charm to “Behave themselves tonight won’t you!” and observes “What strength, what power, what finesse!” they have.

Halfway through the set and the final song before beginning a purely acoustic run of songs he dedicates his cover Rhythm of My Heart to the Ukrainians, lightening the tone by saying it’s by his good friend “Mark what’s his fucking name”.

This moving song is accompanied by powerful images of war torn Ukraine, with the country’s flag adorning the screens on the stage. Wishing everyone a Merry Christmas and a Happy New Year, he jokes that he has “Splashed and out doesn’t mind spending a few bob on a Xmas tree!”.

Mentioning his dancers again he says “One of the girls is pregnant, that brings back memories!”. Proudly paying tribute to his beloved Celtic football team with clips in the screen of their past victories, he snaps “What you f***ing booing for?” as he tells the lively crowd that there will be a “Couple more slow ones then we’ll pick the tempo up and any loose change laying on the stage!”.

A photo of him from 1971 is displayed, wearing trousers he claims are “Inspired by Olivia Newton John, I don’t know maybe they look better on me!.

Penultimate song Sailing is is truly special moment, the chorus sing a along made more evocative by the crashing wave imagery in the background.

A swift exit and return to the stage sees Rod finish with Faces single Stay With Me, topping off an emphatic performance.