The ‘Anti-Hero’ songstress feels like ‘dreaming’ after the ‘All for You’ hitmaker tweets out a reaction video to ‘Midnights’ track ‘Snow on the Beach’, which features a shout-out to Jackson.

AceShowbiz –Taylor Swift‘s new album “Midnights” has received so much love from her fans, but the best compliment is perhaps from a fellow artist. The country-turned-pop superstar feels grateful after Janet Jackson gave her stamp of approval to the younger star’s new song “Snow on the Beach”.

On the track, which is a collaboration between Swift and Lana Del Rey, the 32-year-old gives a shout-out to Michael Jackson‘s sister. “But your eyes are flying saucers from another planet,” she sings. “I’m all for you like Janet.”

Janet, unveiling herself as a Swiftie, later posted on Twitter a reaction video to the song. Listening particularly to this referential part of the song, she bobbed her head and whispered, “That’s nice.” She added in the caption, “i LUV it @taylorswift13 x Lana Del Rey.”

The love quickly reached to Swift, who felt like “dreaming” upon receiving the support from Jackson. Responding to the “Together Again” hitmaker’s reaction video, she tweeted, “I feel like I’m dreaming. I have so much love and gratitude for you and all you’ve done to inspire female artists everywhere.” 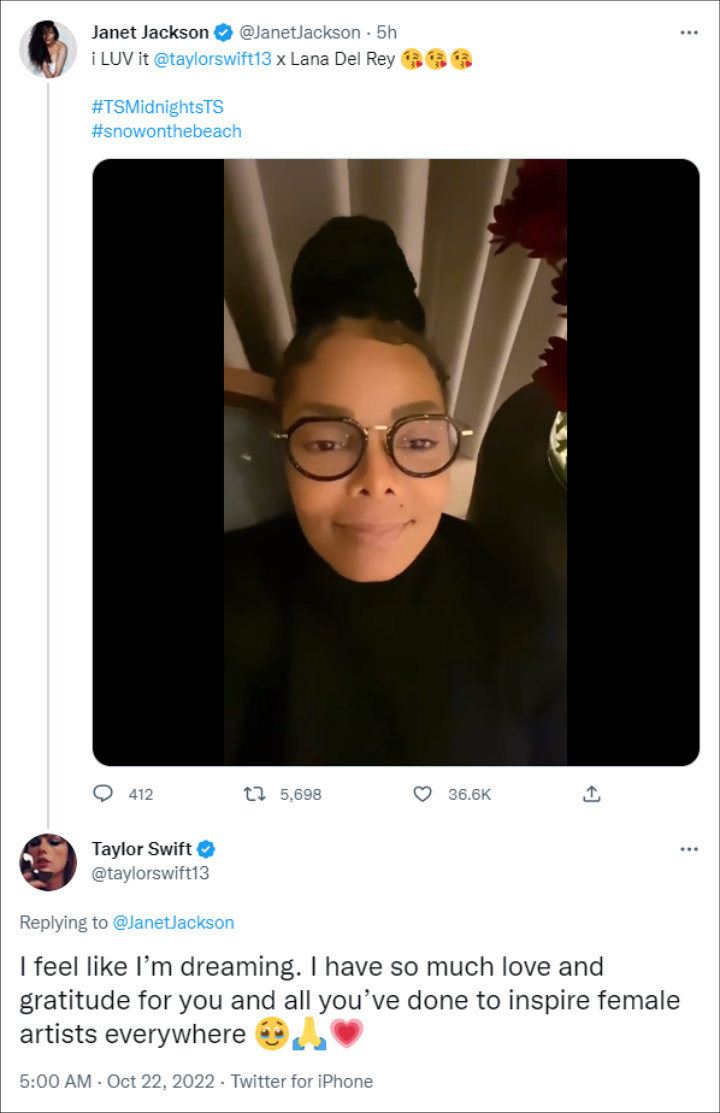 The Jackson reference aside, Swift is believed to have been dropping a lot of secret messages on “Midnights”. One speculation is that she is revealing the name of Blake Lively and Ryan Reynolds‘ fourth child on her new song “You’re On Your Own, Kid”. The track features someone named Daisy May.

“I see the great escape, so long, Daisy May/ I picked the petals, he loves me not,” part of the lyrics reads. “Something different bloomed, writing in my room/ I play my songs in the parking lot / I’ll run away.”

She also appears to address engagement rumors to her longtime boyfriend Joe Alwyn on “Lavender Haze”. “I’m damned if I do give a damn what people say/ the 1950s s**t they want from me/ I just wanna stay in that lavender haze,” she sings on the opening track. “All they keep asking me is if I’m gonna be your bride/ the only kinda girl they see is a one night or a wife.”

Meanwhile, another fan theory is that Swift alludes to a secret miscarriage on “Bigger Than the Whole Sky”. In the chorus, the Grammy Award-winning artist chants, “Goodbye, goodbye, goodbye/ You were bigger than the whole sky/ You were more than just a short time/ And I’ve got a lot to pine about/ I’ve got a lot to live without.” She continues, “I’m never gonna meet/ What could’ve been, would’ve been/ What should’ve been you.”