When BTS released their song “Silver Spoon/Baepsae” in November 2015, they were still growing their fanbase to become the global band they are today. And before they topped charts with disco-influenced tracks like “Dynamite,” BTS members participated taking turns in rap ciphers.

“Silver Spoon/Baepsae” appears on their record, “The Most Beautiful Moment in Life Pt.2,” but is only listed as “Silver Spoon” on streaming services. It has amassed over 145 million streams on Spotify, making it a fan-favorite. Baepsae ( Silver Spoon ) is one of my all time fav!” one person tweeted, while someone else said, “I LOVE THAT SONG SO MUCH. IT’S IN MY TOP 10 BTS SONGS EVER.”

Throughout the years, many new fans who have joined the BTS Army go back to listen to the band’s earlier material but might be wondering what the true meaning behind this song is. So without further ado, let’s take a deeper look into “Silver Spoon/Baepsae.” 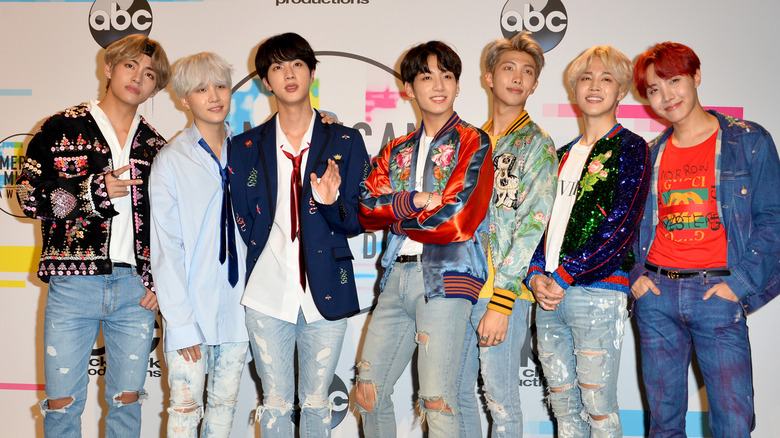 Thanks to the English translation of “Silver Spoon/Baepsae” provided by lyric site Genius, fans can gain an understanding of BTS’ intention with the song. For example, the line “Thanks to those that came before us I’m spread too thin / They call me try-hard / Our generation has had it hard,” speaks to the way younger generations feel like they got the short end of the stick. And in the song’s first verse, J-Hope croons, “At a part-time job, it’s ‘all for experience’ / At school, there’s the teachers / My superiors use violence / In the media they go on about ‘the generation that’s given up.'” Clearly, J-Hope is fighting against the stereotype that his generation is not doing enough.

One of the BTS members, SUGA, is featured solely on the second verse of “Silver Spoon/Baepsae.” He sings, “I have crow-tit legs, and you have stork’s legs,” and the allusions to birds have a double meaning in the song. According to Genius, the lyric references a Korean phrase, “if a crow-tit walks like a stork, it will break its legs.” The crow-tit is another type of bird known in Korea as a baepsae, explaining its place in the title. SUGA’s metaphor of the two birds also speaks to the nature of comparison, highlighting how the two birds are supposed to have different walks.

BTS has never shied away from heavier topics, with Suga telling Soompi that their songs tell the story of what “someone needed to say, but that no one did.”