Nick Jonas famously started his career in the music industry with brothers Kevin and Joe before going solo — and got back with the band in 2019, when they announced they would be joining forces once again. “It started as a seed planted in my brain by a few Twitter comments,” Nick said, per Entertainment Weekly. They’ve since gone on to tour for their latest album, “Happiness Begins,” which debuted at No. 1 on the Billboard 200.

While he’s still in the group with his brothers, Nick continues to take on solo gigs of his own, including one as a coach on “The Voice.” Jonas appeared on the show starting in 2019, and both fans and personnel at NBC were stoked. “As a member of one of the hottest pop groups, Nick’s success in navigating all aspects of the music industry is exceptional,” Alternative and Reality Group at NBC Entertainment president Meredith Ahr told Deadline. “We were so impressed by his innate musicality, technical aptitude, and passion that he brought to [songwriting show] ‘Songland’ earlier this year and know he will be an incredible fit as a coach on ‘The Voice.'”

Fans were also thrilled with the news, as were most of the coaches. So what was Nick so worried about on the show? Keep scrolling for more deets. 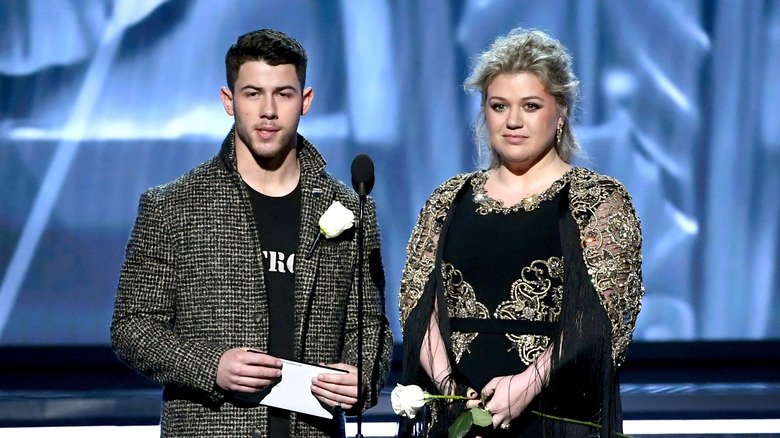 Even though Nick Jonas has a more high-profile gig than the rest of us, he still loses sleep over co-workers taking some things the wrong way. During a recent appearance on “The Kelly Clarkson Show,” the youngest member of the Jonas Brothers confessed that he worried about offending his co-stars on his first season on the series. “Well that was the first thing on, like, day one of my first season. I didn’t know if I was going to offend someone. There’s always that line. But then I realized, you guys are hard to offend,” Jonas confessed to Clarkson. “There have been a few things — can’t remember exactly which things — but times where it was like, ‘Oh, that stung a little bit too much!’ But you just let it go. We’ll hug it out.”

Jonas also shared that he views the cast like his “brothers and sister,” reiterating how much the show means to him. “We’re coaches, sure, but I think the thing that’s so cool is that we also learn so much in the process about ourselves and the artists we’re working with and how to give each other crap, and that’s been the most fun and rewarding part of being on the show for a second season,” he shared.

There’s no doubt that the great group of stars is one reason why the show resonates so well with fans.

Jonas, Nick, Real, reason, the, was
You may also like: