The Traveling Wilburys happened by accident one day in 1988. Five of thebest singer/songwriters in rock ‘n’ roll, George Harrison, Tom Petty, Bob Dylan, Jeff Lynne, and Roy Orbison, just happened to all be together in the recording studio. It was impossible not to create something, having all that talent in one place. So, they recorded “Handle With Care.”

That one song sparked something. The five artists decided they needed to make an album. They chose to reconvene at their fellow musician, Dave Stewart’s house in Los Angeles to record The Traveling Wilburys Vol. 1.

In 1988, shortly after he released his 1987 album Cloud Nine, George was in a bit of a pickle. The international sector of his record company wanted an extra song for a 12-inch single.

So, he had to record a new song quickly. That night, he told the story to Lynne and Orbison. George asked Lynne for help, but Lynne didn’t know where to get a studio and engineer so quickly. Orbison told the guys to call him when they found a recording studio. He wanted to watch them.

Then, George remembered that Dylan had a studio in his garage and called him to see if they could use it. Dylan agreed. George then went to Petty’s house to pick up his guitar. Petty wanted to join the group after he heard what was happening.

They all arrived at Dylan’s garage, and George and Lynne started writing the song. George began to think it was silly having all the guys there but not on the record. It was a once-in-a-lifetime moment having all five of them in one studio. So they all joined in.

Looking around Dylan’s garage, George saw a box that said, “Handle With Care.” So, they formed the lyrics around that phrase. When they finished recording, George knew “Handle With Care” was too good for a European 12-inch. He kept hold of it until he decided to get everyone to record a whole album.

“It was a nice environment because you could kinda sit outside,” Petty said in a video of the making of the album. “It was warm, and the doors were always open.”

George added, “We had a little, tiny studio, but it wasn’t a studio, it was more like just a control room with a vocal booth. So we didn’t have any space to play the guitar, so we set up in his kitchen. It wasn’t soundproofed or anything and we just put like five chairs around the kitchen and put the microphones up and that’s it. So all them guitar parts, all them acoustic guitar parts were just in this kitchen.”

Being in Stewart’s home inspired The Traveling Wilburys to use household objects in the recording process.

On “Rattled,” the band’s drummer, Jim Keltner, started drumming on the shelves in Stewart’s kitchen. “It sounded great,” Lynne said. “It sounded just like old springs, but it sounded really good. It suited the track really well.

“There was nothing off-limits, you know? You could record where you liked, so it was opportunity to get sounds that you never got before.”

George added, “The fridge, I’ll tell you, it’s the great new sound, folks. It’s happening. It had to be a bit rough, but that was the fun about it. It’s the most basic rock ‘n’ roll sound.”

On “Dirty World,” Geoge said he picked up a bunch of magazines and gave them to all the guys. They started reading out little blurbs from various articles and made them into a song. 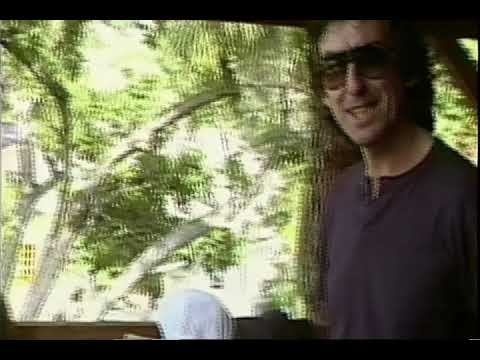 Dylan’s spontaneity was another tool that The Traveling Wilburys had in the recording studio. George was astounded by how Dylan worked on the track “Tweeter and the Monkey Man.”

George recorded a conversation between Dylan and Petty. Then, they transcribed everything they said, turning it into the song.

“It was just fantastic watching him do it because he had like one take warming himself up and on take two, he sang ‘Tweeter and the Monkey Man’ right through, and what he did was change some of the lyrics,” George said. “Maybe in about four places, he’d change a couple of lines and improved them and dropped those lines in. And that was it.

“The way he writes the words down, like very tiny. Looked like a spider’s written it. You can hardly read it. And that’s the amazing thing. It’s just unbelievable seeing how he did it.”

The supergroup was definitely always on their toes recording their debut. Who knew what would happen? In return, they kept their audience on their toes by not putting their names on the album. They used pseudonyms because it wasn’t about them and their own careers. The Traveling Wilburys was about five guys coming together to make music.