We can’t stop listening to “Lost Cause” by Billie Eilish, a moody diss track off her upcoming second album, “Happier Than Ever.” It has a vibe everyone can relate to. With lyrics like, “You ain’t nothin’ but a lost cause / And this ain’t nothin’ like it once was / I know you think you’re such an outlaw / But you got no job,” this is exactly the kind of energy we’re sending to all our unworthy exes, toxic friends, and terrible workplaces.

Eilish also directed the music video for the song, which shows her and a bunch of friends goofing off in a big beautiful house, having water gun fights and playing Twister. The energy we’re seeing here is pretty crystal clear: She is better off than before and is living her best life now.

But we still wanted to dive a little deeper into the meaning behind the words, which get into some pretty specific details. Check out the

Did we just catch an Easter egg? 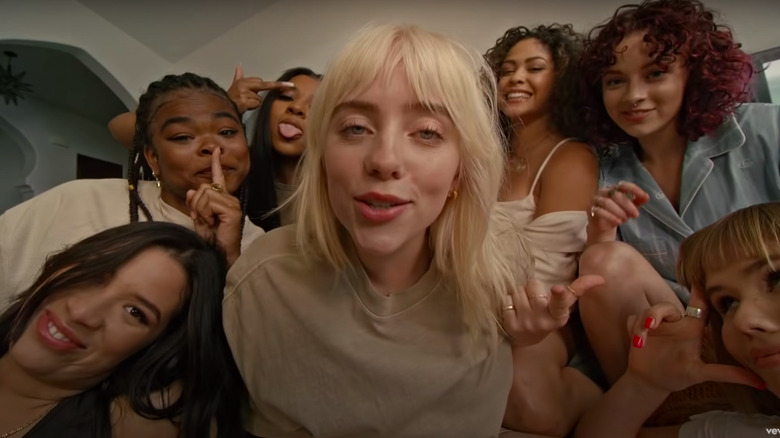 The lyrics to “Lost Cause” begin with Billie Eilish musing, “I wondered if you were aware that day was the last straw for me.” She also sings, “I sent you flowers / Did you even care? / You ran the shower and left them by the stairs.”

The first thing that line makes us think of is Blink-182’s “All the Small Things,” which goes, “She left me roses by the stairs / Surprises let me know she cares.” We’re not saying Eilish is referring to a real relationship with any of the Blink-182 members, but it is a fun way to flip a classic lyric on its head.

The rest of the song describes a situation that sounds all-too familiar — realizing your crush isn’t a hot, broody, loner type. They’re literally just self-absorbed. “I used to think you were shy / But maybe you just had nothing on your mind / Maybe you were thinkin’ ’bout yourself all the time,” Eilish sings.

As for if she’s singing about her ex-boyfriend, Q (also known as 7:AMP), fans seem to think so — but Eilish’s lips are sealed.

Excuse us while we add this to our breakup playlist ASAP.

behind, Lost, meaning, the, TRUE
You may also like: