Who is Shenseea? Jamaican Dancehall Singer Goes Mainstream Thanks To Megan Thee Stallion

Shenseea has started to make headlines thanks to a new song, “Lick,” with Megan Thee Stallion. But while she’s new to pop music fans, she’s been making waves on the Jamaican dancehall scene for years. She has also previously collaborated with some well-known mainstream artists prior to this big breakthrough.

Shenseea: Her early life and career

Born Chinsea Lin Lee in Mandeville, Jamaica, Shenseea is the product of a Jamaican mother and a Korean father. As a child, she would go back and forth between St. Elizabeth and Kingston to spend time with family. After she finished her education, she got a job working as a promo girl in the Jamaican clubs.

That’s when she came across Lemuel Samuel’s Rockstar. Shenseea first gained recognition on the dancehall scene when she remixed the song “Loodi” by Vybz Kartel. That remix got her a spot on the 2015 Reggae Sumfest side stage. Two years later, she made the festival’s main stage, which was a huge accomplishment for such a young artist.

“It was just last year I was on the small stage and I was nervous as hell, but I am more confident this time around. Downsound told my manager they would like for me to perform this year, and I am planning to give a very vibrant performance,” she said to the Jamaica Gleaner.

Who has she worked with in the past?

Despite being best known for her work on the Jamaican dancehall scene, Shenseea has worked with some of the world’s biggest pop artists. In 2018, she appeared on Christina Aguilera’s album, Liberation, on the song “Right Moves.” She also appeared on Tyga’s song, “Blessed,” in 2019, after she signed with Interscope Records.

But she’s perhaps best known for her work with Kanye West. She collaborated on West’s Donda project, and was featured on the song “Pure Souls.” She even appeared on stage with West during his infamous Donda concert in Chicago.

“People will say they support me but SHOWING that support is what counts! @kanyewest I can’t thank you enough for it all! The insight, the exposure, opportunity, support etc.,” she said on Instagram. “You could’ve picked any other female artiste but you chose ME! As you said “this is only the beginning” #DONDA…not 1 but TWO songs on this amazing album. God is great I know the Caribbean proud a me!!”

Now, Shenseea has gone viral thanks to a new song, “Lick,” with Megan Thee Stallion. 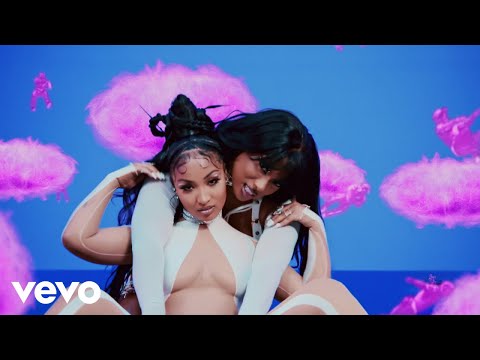 “Produced by Murda Beatz, the song opens with the Jamaican artist making a number of suggestive remarks before Meg discloses some of her own talents in the bedroom,” reports Complex, who added that Shenseea is coming off a “very successful year.”

The song will also be on Shenseea’s upcoming solo album, which is rumored to be released later this year.