Why Russells falling trousers caused a bit of a nessun trauma 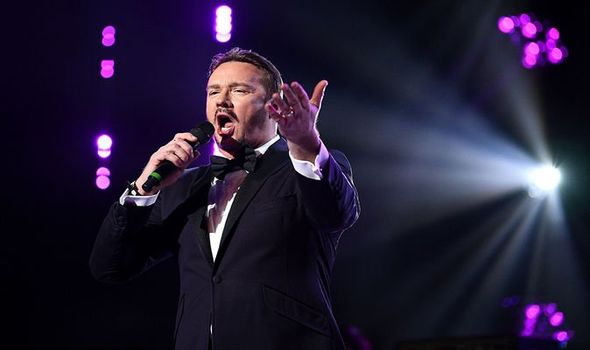 Being locked up in a castle on his 54th birthday during the last series of I’m A Celebrity… gave Russell Watson a chance to reflect on his own mortality.The opera star – who had survived two devastating brain tumours – recalls waking up feeling terrified by the memory of how close he had been to death.

“Because I thought I was going to die at one point, birthdays have an extra special significance to me. Now I’m only a few months away from my 55th birthday and I think, ‘I am here to tell the tale for another year’.”

The implications of his illnesses have been life-changing, partly in a new-found interest in his health and fitness. “I lost 20 pounds when I was on I’m A Celeb and I’ve kept it off as well,” he smiles.

“When I saw the show’s medic on the way out, the first thing he said to me was, ‘Wow you’ve lost this huge amount of weight and you’ve been in less time than the others.’

Then he added, ‘You do realise when you get home you’ll start eating normally and put it all back on.’ I remember walking out thinking, ‘We’ll see about that.'”

Russell has been as good as his word – with some unusual consequences, not least that his smart stage outfits no longer fit him.

“I’ve got myself a multi-gym, I’ve got one of those fixed bikes and it’s like riding through the fjords of Norway. I have been keeping myself in good shape and it’s funny because I’ve had no reason to put on a suit for 18 months.

“I put on one of my old suits and, when I performed at a charity gig recently, I had to keep pulling my pants up because they were falling down on stage. I was, like, hiking them up while I was singing. The last time I put these on I was busting out of them.

‘I’ve waiting months on the would I wait longer?’

“It would have been quite embarrassing if my kecks had come down and just revealed my black boxer shorts during Nessun Dorma.”

He adds: “I have great movement at the moment and great flexibility because I have been doing a lot of stretching and I do Pilates.”

Classical tenor Russell was just 39 when he was diagnosed with a brain tumour in 2006 after suffering headaches and loss of peripheral vision, originally blamed on stress.

He was taken to St George’s Hospital in south London to have it removed through his nose. But that successful op was only the beginning of his battle.

In 2007, a second brain tumour proved even more dangerous, causing a collapse and nearly costing him his life. He recounts: “My assistant found me, called the paramedics and I knew I was in trouble because the paramedic kept saying, ‘Stay with us, stay with us’. ” Russell was operated on again, but insisted on a delay before surgery so he could see his daughters, Rebecca and Hannah, in case he did not survive.

Amazingly, he battled back to health, but his condition is still monitored. “I need to have regular MRI scans every 12 months to check that my brain tumour is not on its own comeback tour,” he says. “I go to a local unit in Manchester and afterwards they thankfully say, ‘You’re all right’, and I get on with my life again.”

Russell has been busy trying on his suits because he’s ready to start performing again. This Sunday he is taking to the stage at Audley End House and Gardens, in Saffron Walden, Essex, as part of English Heritage’s concert series.

The Last Night Of The Heritage Proms show also features the Royal Philharmonic Concert Orchestra, as well as composer arranger and producer David Arnold and special guests The NHS Chorus-19.

The UK’s best-selling classical tenor, who also has a major tour lined up for the autumn, is raring to go.

“Nothing is going to stop me,” he says. “I’ve had both vaccinations now and I’ve been sat here for 18 months waiting to go out on the road. Why would I want to wait any longer? It’s been a very, very difficult time for a lot of people.

“I think we’ve been very patient but it just doesn’t feel like freedom at the moment. It feels like there’s still something out there. And we need to be vigilant.

“There is no doubt that Covid-19 is still highly infectious. I know people in the medical profession and it isn’t going away. But we can’t lock ourselves away forever. It’s not sustainable.

“The entertainment and hospitality sector has spent 18 months doing everything the Government has told us to do.

“We simply can’t now have, ‘Let’s just wait another two weeks, three weeks or two months even.’ There’s got to be a point where it has reached saturation point and we say, ‘We’ve got to give it a go.’ There are a lot of venues I know that have already gone by the wayside.

“And what is the alternative? To live my life sat at home every single day? I am worried about getting Covid and getting ill and anyone that I love getting Covid – I have already lost a close friend to it. But what option do we have?”

Born and educated in Irlam, near Manchester, Russell left school with few formal qualifications to work in a factory producing nuts and bolts.

It was only after winning a talent contest on a local radio station in 1990 that he began to pick up steam, and after a series of high-profile performances over the decade that followed, he finally recorded a debut album, The Voice, which spent a year at the top of the UK classical chart.

He remains a down-to-earth optimist. “I’m a genuine believer of the people of the country. Not the Government or royalty. The one thing that makes Britain great is the people that live here. That has been established in the last 18 months.

“It’s their resolute attitude to everything. The one thing that I think we’ve done in this country in the last 18 months is that most people have adhered to what they’ve been told to do. And we’ve been incredibly patient during a very difficult time.”

However, he is alarmed at the impact of the pandemic on small businesses and the rise of large corporations. “It’s really quite obvious there are certain sectors – some of the really big conglomerates like Amazon – that are doing incredibly well out of this.

“But I walked down the high street in Wilmslow the other day, which has always been a busy, thriving, industrious little town with shops and cafes.

“It was heartbreaking. Every other shop had a ‘To Let’ sign. You can see all these bloody Amazon buildings popping up all over the place, while local facilities and shops are closing.

“I’ve got into tennis even more in lockdown and there was a shop that I’d bought my tennis gear from and it has been open for 60 to 70 years. And they always had a sign up, saying established in 1950 or 1960 or whatever on the door. I went to go and get my tennis racket restrung a few weeks ago, and it’s gone.

“It’s been there for years and it’s gone and there will be more and nobody seems to give a s***.Those little shops we used to go to are like the heartbeat of our nation and they are being replaced by faceless companies.”

Aswell as selling out public shows, Watson has collaborated with a wide array of artists including musical greats Lionel Richie, Paul McCartney, Lulu and the late Luciano Pavarotti, as well as performing for the Queen, Bill Clinton and the Emperor of Japan.

But more than 10 albums into his career, and with numerous sell-out concerts under his belt, does he still see himself as a “driven lunatic” as he once described himself?

“I was born in Salford to a working-class family and we didn’t have much money so some might consider us as probably being poor,” he admits. “But we didn’t see it like that, my sister and I, because we had a fantastic childhood and a wonderful upbringing.

“I left school at the age of 16, and with no qualifications and got a job in a factory and sang in NorthWest’s working men’s clubs for 10 years.

“And then, literally overnight, from 1999 onwards, I became the best-selling classical artist the UK has ever produced and that doesn’t happen without being really crazy, wild, driven and committed to what I am doing. So yes, I am a ‘driven lunatic’.”