R&B singer Yaya Bey has lived some lives. At 32, she’s dabbled in marriage, divorce, weed peddling, visual art, education for the houseless, and street medicine. She’s also been a songwriter since age nine, first crafting hooks for her father —  an MC who’d seen moderate success in the Nineties — in their Queens, New York, home. “He was like, ‘You can’t sing,’ ” Bey recalls, trying to mimic her dad’s bite. “But he always thought I was a good writer.”

Now based in Brooklyn, Bey began this spring with an engrossing EP, The Things I Can’t Take With Me. “I’m just trying to heal,” she says. “I lived a lot of my life having men kind of run the show: my dad, my ex-husband, men I’ve dated.” The music is sensitive and bare. Bey plainly reveals generational trauma, lust, and prayers with innovative vocalizations — sheets of buoyant ad-libs, trills, and stutters. There’s hurt all over, but there’s also defiance. “I don’t want to be some fucking Tyler Perry battered Black woman, because that’s not true,” she says. “There’s layers.”

A cascade of black box braids lay atop Bey’s lavender button-down when we chat over Zoom. Above her head is a painting, a rendition of Jay-Z and Beyoncé posing in front of the Mona Lisa in their “Apeshit” music video. “Yeah, this is not my art,” Bey clarifies. She’s renting a room in Washington, D.C. to work on her next album with an instrumentalist she trusts. Bey spent some of her transient adulthood in the D.C. area, working in museums and libraries as an art curator and teacher. She does the artwork for her music herself, making collages of intimate photos and self-portraits. “God willing, I can do an art show this summer,” she adds. “I can’t do sad songs all the time.”

After her father insisted she couldn’t be a singer, Bey became a poet. “I always wanted to perform my own words,” she says. She moved to D.C. after making a bit of a name for herself in poetry circles, and began dating another wordsmith. “We were this poetry couple. It was so fucking disgusting,” she says with a laugh. In D.C., Bey began working with the producer Chucky Thompson (whose resume includes classics by the Notorious B.I.G., Mary J. Blige, and Faith Evans) and writing reference tracks for another singer. She says that “shit didn’t work out,” with Thompson or the singer, but the experience showed her that she had what it took to make her own music. That, however, meant that shit wasn’t going to work out in her relationship, either. “He was super-Christian and wanted me to be a housewife,” says Bey. “He hated everything I tried to do to empower myself.”

It took her four years from that breakthrough to release her debut album. In the meantime, Bey worked; got married to someone else; joined and left a band with her then-husband; and packaged and delivered the aforementioned weed. (“I definitely paid [my publicist] with money from the trap,” she says.) 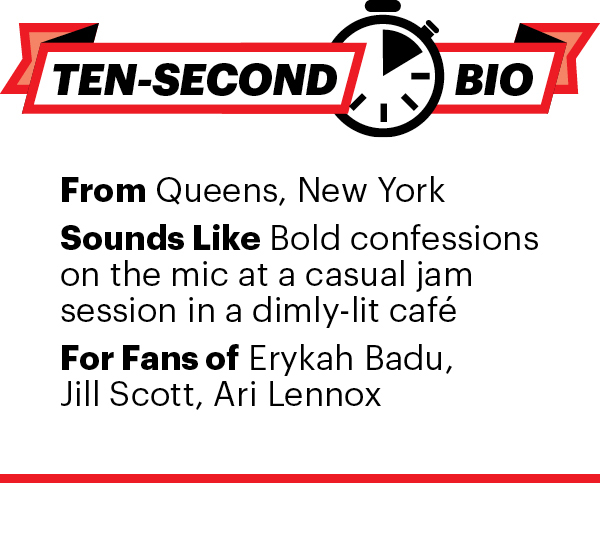 Her street-medic experience came around the same time. Enraged after 18-year-old Michael Brown was killed by a police officer in 2014, Bey organized travel to Ferguson, Missouri, with virtual strangers that she had met at a community gathering at D.C.’s Sankofa bookstore. Then, when 25-year-old Freddie Gray was killed in police custody in Baltimore seven months later, Bey went to help out at the protests there. She says she left Ferguson with a black eye after being assaulted by a white agitator, and in Baltimore, she had a gun drawn on her by a member of the National Guard. She makes a particular note of her time in the streets: “All I ever saw was Black women.” She thinks about how she saw Black women put their bodies on the line for Black men in a way that’s often unreciprocated.

Bey’s art is inextricable from her Black womanhood. “All of it really is about being undervalued,” she explains. “And navigating wanting to be valued and wanting to be loved. The subject matter might change, like who’s undervaluing me and who is not loving me.” On her 2016 debut, The Many Alter-Egos of Trill’eta Brown, Bey employs personalities like “Get $ Trixie,” “Celie Jr” (named for the character in The Color Purple), and “Buck McDaniels,” to interrogate gender, relationships, revolution, and her place in all three. Still, she’s careful to make the distinction that she doesn’t make “identity” music. “I make music to cope,” she says. “It’s the place where I can fuss without being gaslit, like ‘Look at you, you’re angry and Black, you’re crazy.’”

Bey’s pen and sounds have grown more unique as she’s shed past collaborators (namely, her ex-husband) and built her confidence. She’s dismissive of her 2019 release This Too…, which she made with her ex-husband in the midst of their divorce — “which was fucking torture,” she says. Last year’s album, Madison Tapes, however, is a charming balm for isolation, released in the pandemic’s early months. It’s marked by interludes of light and introspective conversations from the budding friendships Bey made upon her return to New York after her divorce. It probes heartbreak while celebrating the life she’s rebuilding.

“I’m in a new era,” she says. “I’m like a baby in this bitch. It’s wobbly, but I’m much more empowered now than I was when I started.”

Artist You Need to Know, ramp
You may also like: