Some 65 million years ago, a rock from outer space slammed into Earth, wreaking havoc on life in its wake and leaving a large crater on our planet’s surface.

No, it’s not the one you’re thinking of.

Boltysh crater, a 15-mile-wide formation in central Ukraine, may not be as famous as the Chicxulub crater under the Yucatán Peninsula in Mexico, which is directly implicated in the death of the dinosaurs and many other species about 66 million years ago. Nevertheless, Boltysh has long led to debate among scientists. Some have suggested that the crater, which is buried under more than 1,000 feet of sediment, could have formed before or after the Chicxulub event, making its role in this cataclysmic period unclear.

Now, a team led by Annemarie Pickersgill, a research associate at the University of Glasgow, estimates that Boltysh formed about 650,000 years after the Chicxulub catastrophe. The refined age has implications for understanding how Boltysh affected this tumultuous time, and can shed light on our own era of sudden climate change.

For a study published on Friday in Science Advances, the researchers performed a technique known as argon-argon dating with rocks extracted from Boltysh. They also analyzed specimens from a geological layer in Montana, the K-Pg boundary, that marks the dramatic transition wrought by the Chicxulub impact. This comparative approach, along with advances in radiometric dating methods, yielded a more refined sequence of events than previous studies.

“It’s the first comparison of Boltysh samples directly to K-Pg boundary samples,” Dr. Pickersgill said. “Because we analyzed everything under the same experimental conditions, we could neglect a lot of the uncertainties that we would get if, say, one lab had analyzed the K-Pg boundary and a different lab had analyzed Boltysh.”

The new age estimate places Boltysh about a half-million years after the dinosaur-killing asteroid, contradicting the conclusions of a 2010 study in Geology that dated it to a few thousand years before Chicxulub. The researchers who wrote that paper embraced the new findings, and some became co-authors of Dr. Pickersgill’s study.

“The guys who did the previous work, who ended up being my collaborators, are really good scientists,” she said. “When I came up with an answer that apparently conflicted with their results, I was surprised and somewhat alarmed. But we double-checked everything and the data is what it is.”

“It was a very nice science experience for me because they were so happy to adopt the new hypothesis and come up with new interpretations,” she added. 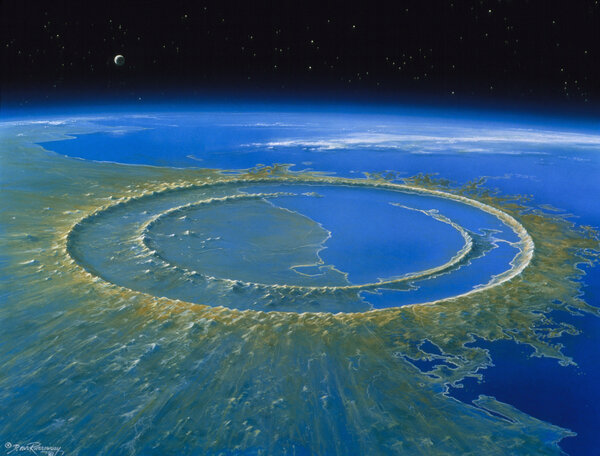 For years, scientists speculated that the Boltysh and Chicxulub impactors may have acted as a one-two punch that shattered life at the end of the Cretaceous period. The revised age suggests that the impact that made the Ukrainian crater did not factor into the apocalyptic die-off of the dinosaurs, though it may have interfered with the recovery from the mass extinction.

Dr. Pickersgill’s team raises the possibility that Boltysh could be linked to a warming event, called the lower C29N hyperthermal, which occurred around the same time, though confirming that relationship would require more substantial evidence.

Sean Gulick, a geophysicist at the University of Texas at Austin, said that the new age for Boltysh appeared sound, but that he doubted the impact had any connection to the coincident hyperthermal or the pace of recovery from the extinction.

“This is an important study” that can help “unravel this question about whether smaller events have had major climate effects or not,” Dr. Gulick said.

“I think in this case, the evidence would be that it didn’t, necessarily,” he added. “But the only way we can figure that out is if you get these really precise dates.”

Pinpointing these connections not only opens a window into Earth’s ancient history, but it can also help us prepare for modern human-driven climate change.

“Many of my colleagues are paleoclimatologists — they’re studying the effects of climate in the past — and the reason they’re doing that is out of nerdiness, but also to understand what’s happening to the climate right now,” Dr. Pickersgill said.

Ken Amor, a geochemist at the University of Oxford, also emphasized the importance of assessing the risk of Boltysh-scale impactors striking Earth. Chicxulub-level impacts appear to be extremely rare “Black Swan events,” he said, but our planet is vulnerable to smaller objects, like the roughly one-mile-wide impactor that produced Boltysh.

“Something like that falling on London or Paris or somewhere would just totally wipe it out,” Dr. Amor said. “The chances of that happening on human time scales is quite small, but there does always remain that possibility.”

He added that one way to build on the new study was to collect more samples from Boltysh and other impact craters to further refine their ages and the properties of the objects that created them. Dr. Pickersgill would be happy to contribute.