This week, football fans across England celebrated after the Three Lions triumphed over Wales, taking them through to the last 16 of the FIFA World Cup.

But Harry Kane’s squad may have competition for their ball skills from an unlikely competitor – rays.

Experts at London Aquarium have shared adorable footage of rays playing their own version of underwater football.

Aside from making for fun viewing, the football – which is filled with food – encourages mental stimulation in the rays, according to the team. 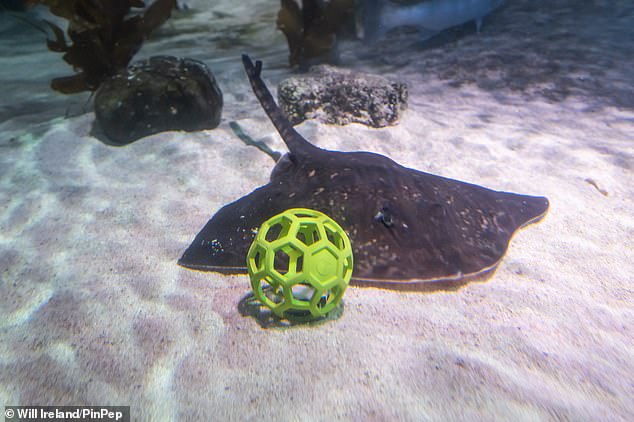 Like sharks, skates and rays are vulnerable because they:

– Are slow growing and late to mature

– May not reproduce every year

– Their body shape makes them especially vulnerable to overfishing

The underwater football game is designed to stimulate natural behaviours in rays.

In the footage, six rays can be seen participating in the game, which features a hollow football filled with their favourite fish.

Rays have the special ability to find prey based on the electric fields creatures give off.

However, for the football game, the rays instead had to rely on their sense of smell to find their food.

By using simple problem solving and teamwork, the rays worked out they needed to dive towards the feedable football, then bat it back and forth for more food to fall out and eat.

‘Our squad of rays have loved playing their own version of the beautiful game since we introduced the new enrichment plan for the start of the World Cup,’ said Rowena Kennedy, Displays Supervisor at SEA LIFE London Aquarium.

‘Rays are intelligent creatures so it’s important that we encourage natural feeding behaviours and problem solving in their care plan. 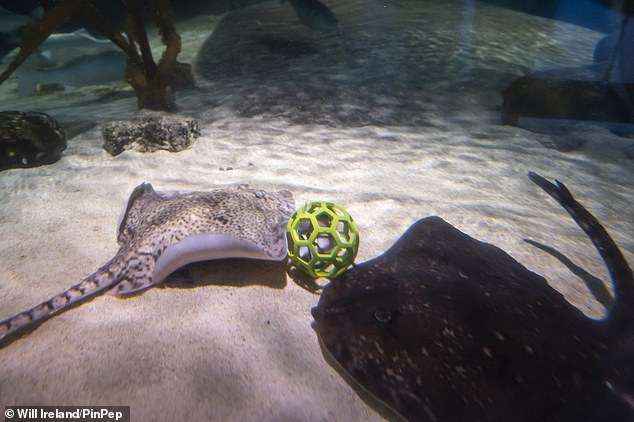 In the footage, six rays can be seen participating in the game, which featured a hollow football filled with their favourite fish 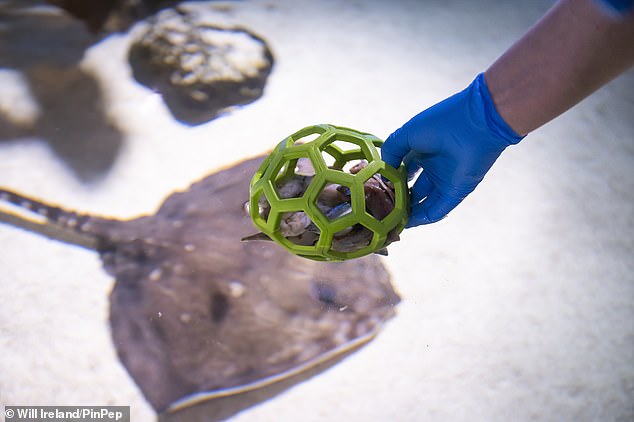 Aside from making for fun viewing, the football – which is filled with food – encourages mental stimulation in the rays, according to the team

‘Our feeder footballs are a fun and stimulating way for the rays to eat as it encourages foraging behaviour and utilises their keen sense of smell as they would in the wild.’

Skates and rays are closely related to sharks, but are flatter in shape, which makes them well suited for life on the sea-floor.

Their mouth, nostrils and gills are located on the underside of their body, while their eyes are on top.

Worldwide, there are over 600 species of skate and ray, with the largest, the Manta Ray, measuring up to 29.5ft (nine metres) in length.

Unfortunately, research has revealed that large, flat-bodied coastal species are the most vulnerable to extinction.

‘In the UK, larger skates (such as the White Skate and Flapper Skate) have become some of the most threatened species in British waters,’ Shark Trust explained.

HOW INTELLIGENT ARE MANTA RAYS?

Manta rays are believed to be some of the most intelligent creatures in the ocean and have several traits and studies to support this claim.

The large fish belong to a order known as Myliobatiformes which includes stingrays and other similar species and is a group closely related to that of sharks and are characterised by their cartilaginous bodies.

Further classification of the majestic marine animals puts them in the family Myliobatidae (eagle rays).

There are two scales of how intelligence is roughly estimated in different species, brain mass and brain size relative to the animal’s body.

Manta rays certainly measure up well on the former as they have the largest brain of any fish.

But many other animals of similar body size have smaller brains and survive just fine.

What distinguishes the manta ray, as well as animals like humans and elephants, is that the brain is very large when compared to the body.

This means the animal has invested heavily over the course of its evolution in its brain power, indicating a clear advantage to greater intelligence and concerted effort to improve its capacity.

Many researchers believe, and previous studies have indicated, that they are capable of recognition, of others and potentially even of themselves, and have almost mammalian intelligence – far more advanced than that of regular fish.

Self-recognition is an elite test of intelligence and mirror tests have only proved that great apes and bottlenose dolphins have this ability.

It is believed mantas do too as when presented with a mirror they behave unusually, repeating motions often – similar to a human ‘preening’ themselves.

This is not how manta rays react when faced with another animal and implies it is aware of its own reflection, scientists believe.

This intelligence manifests itself in nature in the form of mantas often going out of their way to investigate different things out of curiosity.

Their large brains are also believed to have engorged regions known to play a role in higher functions, such as intelligence, vision and motor coordination.

In addition, manta rays are known to repeatedly revisit the same feeding areas or so-called ‘cleaning stations’ on coral reefs — where cleaner fish will nibble away any parasitic organisms that have attached themselves to the manta.

This behaviour has led researchers to conclude that mantas are able to creative cognitive maps of their environment to help them navigate back to these preferred locations.

They are also known to be highly curious animals and often initiate play-like behaviour with human divers — a phenomenon otherwise really only seen to such an extent in intelligent social marine mammals like dolphins and whales.

Divers also report that mantas actively solicit help when tangled in lines or injured, rather than the fear response more typical of a vulnerable animal.

Although few mantas are kept in captivity due to their size, marine experts at the S.E.A. Aquarium at Resorts World Sentosa claim that the rays are able to recognise gesture cues — such as being tapped twice on the head.