An anchor discovered during survey works for an offshore wind farm could date from Roman times or the late Iron Age, an archaeologist has claimed.

This was during marine seabed survey works prior to construction of ScottishPower Renewables’ East Anglia ONE offshore wind farm.

The artefact is thought to be somewhere between 1,600 to 2,000 years old, and could provide material evidence of ancient Romans’ seafaring and trading.

Brandon Mason from Maritime Archaeology Ltd described the anchor as ‘an incredibly rare piece of history’.

‘If this date is confirmed, it would be hard to overstate its significance,’ he said.

‘We only know about three pre-Viking anchors from northern European waters outside the Mediterranean region and only two actually survived.

‘We believe this find could be the oldest and one of the largest surviving examples, giving us hard evidence of the incredible amount of activity that must have been going on in the waters in Roman times, but that we know relatively little about.’ 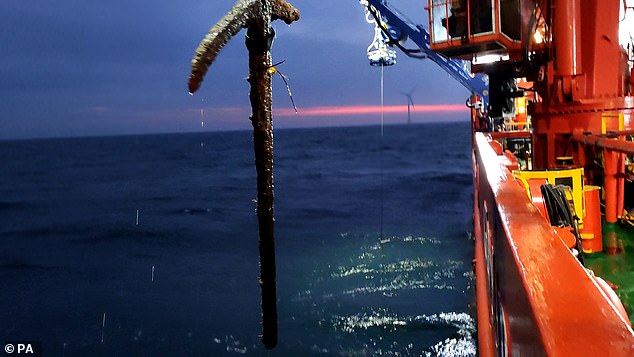 After its discovery, the anchor was protected by an exclusion zone and strictly monitored using remote underwater technology.

Last year, it was raised more than 140 feet by the Glomar Wave accommodation vessel around 25 miles off the coast of Suffolk before being taken to shore.

Several features on the anchor are comparable with those used on ships from the Imperial Roman period.

It is believed to have come from one of the larger Roman merchant ships of the Classis Britannica fleet, that weighed between 500 and 600 tonnes.

Classis Britannica was the regional fleet of the Roman province of Britannia and the first navy of Britain.

It operated from the mid-first century to the mid-third century and employed merchant vessels to transport food, troops, horses and war machinery such as catapults and rams.

So far, very little physical maritime evidence of the fleet has been discovered.

The Romans used 10 regional fleets to cover different areas, and the Classis Britannica was the British equivalent.

It was created from the 900 ships built for the Claudian invasion in the year 43 AD and staffed by about 7,000 personnel.

After the occupation of Britain, the role of the navy was to provide coastal support to land forces and control the waters around the Roman province of Britannia.

For example, the Classis would have scouted the coastline and resupplied the advancing legions as they pressed further north into tribal territories, establishing forts and temporary encampments during Agricola’s campaign into Caledonia (Scotland).

In the final years of Roman rule, the fleet was devoted almost entirely to protecting the Eastern and Southern coasts against Frankish pirates, and Saxon raids against coastal settlements.

The anchor is currently undergoing detailed imaging and analysis to better pinpoint its age and provenance.

It will then go on permanent display in conjunction with Colchester and Ipswich Museums in 2025.

Mr Mason added: ‘Everything points to this being a Roman anchor of almost 2,000 years old, which is an incredibly rare piece of history.

‘It’s an absolute privilege to bring the anchor to the surface and to share its story with people not just across the East of England, but right around the world.’

Stuart Churchley, Historic England marine planning archaeological officer, said: ‘The discovery of such a potentially significant anchor of this date, among the vast seafloor expanse of the southern North Sea, is testament to the careful and methodical steps taken by the East Anglia ONE project.

‘This area of the North Sea has been mapped and investigated in a way not completed before.’

The anchor is the latest in a series of historical finds during work on the wind farm.

These include a missing German submarine from the First World War and numerous artefacts from the Bronze Age, Iron Age, Roman and Medieval periods.

Other finds include a prehistoric monument dating back more than 4,000 years, complete with a rare Neolithic wooden trackway and platform and an ancient wild cattle skull radiocarbon-dated to around 6,000 years ago.

Ross Ovens, ScottishPower Renewables’ managing director – East Anglia Hub – said: ‘Our East Anglia ONE wind farm has proven to be an archaeological treasure trove – both onshore and offshore – and this latest find shows that it just keeps giving.’ 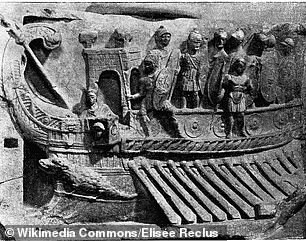 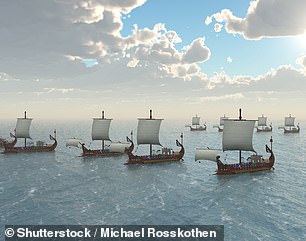 The anchor is believed to have come from one of the larger Roman merchant ships of the Classis Britannica fleet, that weighed between 500 and 600 tonnes. Left: A Roman naval bireme depicted in a relief from the Temple of Fortuna Primigenia in Praeneste, Italy, which was built c. 120 BC. Right: Graphic showing fleet of ancient Roman warships (stock image) 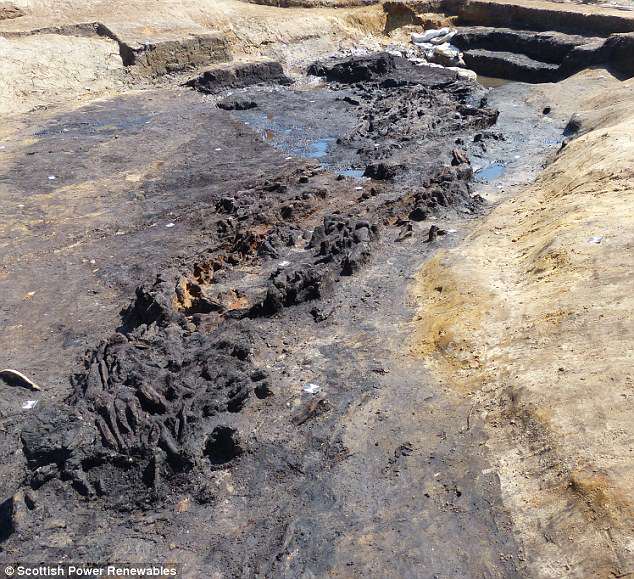 A 4,000-year-old wooden trackway that forms the centrepiece of a Neolithic henge (pictured) was unearthed at a ScottishPower Renewables site near Woodbridge, Suffolk in 2018

How England spent almost half a millennium under Roman rule

43AD – A Roman force of 40,000 led by Aulus Plautius landed in Kent and took the south east. The emperor Claudius appointed Plautius as Governor of Britain and returned to Rome.