The Arctic is warming nearly FOUR TIMES faster than the rest of the world, study reveals

The Arctic is warming nearly four times faster than the Earth’s average – up to twice as fast as previously described, a new study shows.

Researchers have analysed multiple datasets from the likes of NASA and the Met Office about Arctic Circle temperatures between 1979 and 2021.

They found a large proportion of the Arctic Ocean warmed at a rate of 1.35°F (0.75°C) per decade during this period, nearly four times faster than the global average.

Previous studies report that the Arctic is warming either twice, more than twice or three times as fast as the globe on average.

These estimates have generally been reported in the literature and in the media, but they are ‘significant underestimations’, even though they’re based on ‘state-of-the-art’ computer models, the authors say.

Temperatures are warming faster in the Arctic than the rest of the world largely because of the loss of sea ice.

When bright and reflective ice melts, it gives way to a darker ocean. This amplifies the warming trend because the ocean surface absorbs more heat from the sun than the surface of snow and ice. 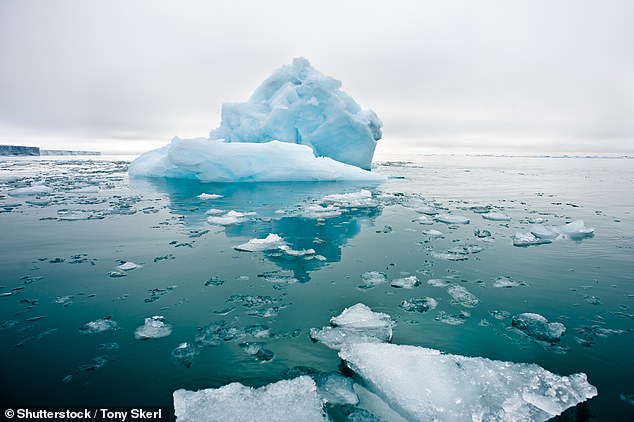 The Arctic is warming nearly four times faster than the rest of the world, a new study reveals. Pictured are melting sea ice floes in still waters of Northern Arctic

Researchers have analysed observational datasets from the likes of NASA (Gistemp) and the Met Office (HadCRUT5) about Arctic Circle temperatures between 1979 and 2021. This graph shows evolution of annual mean temperature in the Arctic (bold colours) and globally (faint colours). The temperatures have been calculated relative to 1981-2010 average

Why is the Arctic warmer?

As far back as 1896, Swedish scientist Svante Arrhenius hypothesized that changes in the concentration of carbon dioxide in Earth’s atmosphere could alter surface temperatures.

He also suggested that changes would be especially large at high latitudes, more so than the tropics.

In recent decades the warming has been strongest in the Arctic – referred to as ‘Arctic amplification’.

In 43 years the Arctic has been warming nearly four times faster than the average for the whole of the globe.

In recent decades the warming has been strongest in the Arctic – a phenomenon referred to as ‘Arctic amplification’.

The magnitude of Arctic amplification is affected both by climate change caused by human activity, and by natural long-term variations in climate.

According to the study, both factors have probably led to an increase in the amplification in the past 43 years.

The new study has been led by researchers at the Finnish Meteorological Institute and published in the journal Communications Earth & Environment.

‘In recent decades, the warming in the Arctic has been much faster than in the rest of the world, a phenomenon known as Arctic amplification,’ they say.

‘Numerous studies report that the Arctic is warming either twice, more than twice or even three times as fast as the globe on average.

‘Here we show, by using several observational datasets which cover the Arctic region, that during the last 43 years the Arctic has been warming nearly four times faster than the globe, which is a higher ratio than generally reported in literature.’

For the study, the team compared observational data from a range of climate datasets, including the Met Office’s HadCRUT5, NASA’s Gistemp and Berkeley Earth form the non-profit of the same name.

Although where the Arctic starts and ends is debated, the team defined the Arctic region as the area within the Arctic Circle.

Meanwhile, the rate of warming was calculated from 1979, when more detailed satellite observations became available.

‘The Arctic was defined using the Arctic Circle because we wanted to use an area which most people perceive as the Arctic,’ said study author Mika Rantanen, a researcher at the Finnish Meteorological Institute.

‘We focused on a period that began in 1979 because the observations after that year are more reliable and because strong warming began in the 1970s.’

Researchers found Arctic warming to be four times higher than the global average, but even stronger at the local level.

For example, in the Barents Sea area, between the Svalbard and Novaya Zemlya archipelagos, it has been seven times above the global average. 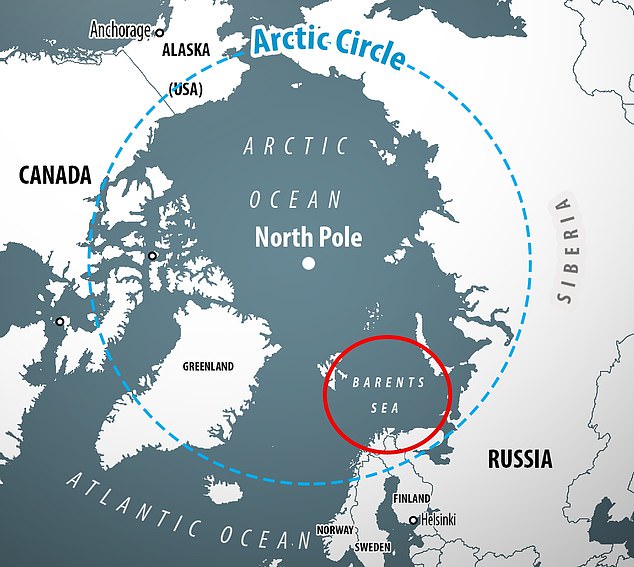 A map of the Arctic, with the Arctic Circle – an area that most people perceive as the Arctic – in blue. Also circled is the Barents Sea area, where warming has been seven times above the global average 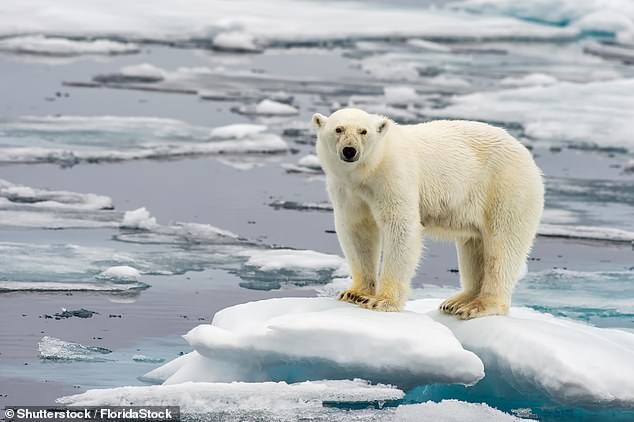 Pictured, a polar bear on melting ice floe in the Arctic Sea. Temperatures are warming faster in the Arctic than the rest of the world largely because of the loss of sea ice (file photo)

The study also showed that climate models struggle to simulate the four-fold warming rate of the Arctic region.

This could mean that climate models systematically underestimate Arctic amplification, or the current warming situation is just deemed as too unlikely an event for a computer model.

The team admit that the magnitude of Arctic amplification is dependent on how the Arctic region is defined, and by the period of time studied.

However, the climate models were found to underestimate Arctic amplification almost independent of this, they report.

‘Our results call for more detailed investigation of mechanisms behind AA [Arctic amplification] and their representation in climate models,’ the team conclude.

From starting wildfires to melting glaciers, the negative effects of climate change are well documented, but a new study suggests there could be at least one positive.

Researchers say that, in as few as two decades, parts of the Arctic that were once covered in ice year-round will be reliably ice-free for months on end due to global warming.

A result of this could be shorter, more eco-friendly maritime trade routes that bypass the Russian-controlled Northern Sea Route.

This would reduce the shipping industry’s carbon footprint and weaken Russia’s control over trade routes through the Arctic, they say.

Examples of routes through the Arctic that will be made more navigable by melting ice include Transpolar Sea Route and Northwest Passage.