Is a lack of WIND to blame for Britain’s energy shortage? How a ‘perfect storm’ of cold weather and low wind speeds is putting the UK at risk of BLACKOUTS

More than a million households in England, Scotland and Wales will be paid to cut back their electricity usage between 5pm and 6pm today to prevent blackouts.

It comes amid warnings that energy supplies will be ‘tighter than normal’ on one of the coldest days of the year — but why is Britain so short of energy?

Experts say it is a ‘perfect storm’ of the cold weather ramping up demand, lower than usual wind power and uncertainty over whether the UK will be able to import the power it needs via undersea cables from Europe.

MailOnline delves deeper into the crisis and looks at whether this is now an annual trend. 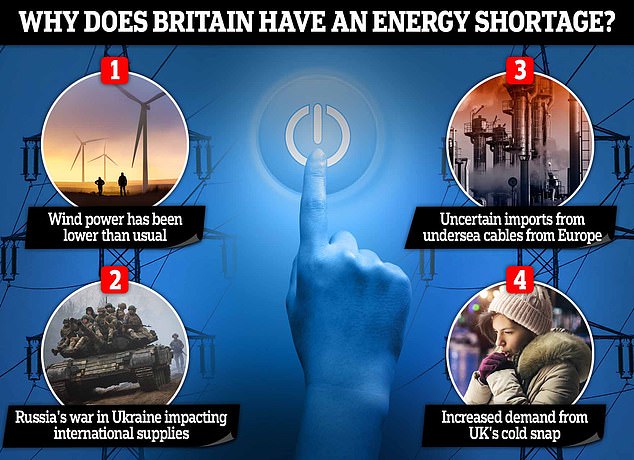 What has caused the UK’s energy shortage? Experts say cold weather ramping up demand, lower than usual wind power, and uncertainty over whether the UK will be able to import the power it needs via undersea cables from Europe are all to blame 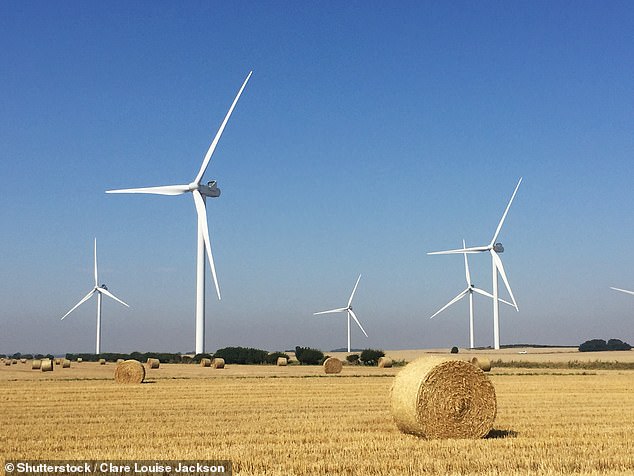 With recent conditions being calmer, there has been less wind power generated (stock image)

Why is there an energy shortage?

One of the main reasons is the cold snap that has blanketed Britain over the past week, leading to an increase in the demand for power from UK households and businesses.

Not only this, but with conditions being calmer, there has been less wind power generated.

On some days wind can provide more than half the country’s electricity, while just two weeks ago blustery conditions saw the UK break its record for wind power generation.

On some days wind can provide more than half the country’s electricity, while just two weeks ago blustery conditions saw the UK break its record for wind power generation. This graphic shows how wind power supplied more than 57 per cent of the UK’s electricity on January 14

But on Saturday it provided less than a quarter of Britain’s electricity (pictured), meaning more natural gas had to be used to prop up demand, which in turn has been higher because of the cold weather

This was helped by a growing number of turbines across Britain.

Such has been the impact of strong wind speeds in recent weeks that it helped slash Britain’s reliance on natural gas for electricity, which in turn saw gas prices fall close to their pre-Ukraine war level.

But with calmer conditions over the last seven days, and more on the way, wind power is forecast to be lower than usual.

So much so that on Saturday it provided less than a quarter of Britain’s electricity, meaning more natural gas had to be used to prop up demand, which in turn has been higher because of the cold weather.

It is also unclear whether the UK will be able to import the power it needs via undersea cables from Europe.

Experts have previously expressed fears that the UK will face challenges getting gas from storage sites in Europe this winter, with countries on the continent facing their own supply crunch due to Russia’s invasion of Ukraine.

Is Russia to blame?

Sort of, but there are many other factors.

Ever since it invaded Ukraine, the Kremlin has reduced energy supplies to Europe in response to what it says are punitive economic sanctions imposed on it by the West.

Nord Stream 1, Russia’s largest gas pipeline to Europe, was closed indefinitely last September after a number of leaks were found in it.

EU leaders said the leaks were caused deliberately, but the Kremlin has denied being to blame.

Nord Stream 1 would normally supply European Union states with about 35 per cent of all the gas they import from Russia.

While the UK does not itself rely on Russia for oil and gas, any disruption to the EU – or international supplies on the whole – causes a widespread impact that has a knock-on effect on Britain.

So how did it all begin?

‘As countries began to recover from the pandemic, demand for gas increased and couldn’t be met because of a supply shortage,’ explains Abigail Ward, policy and communications officer at Energy Saving Trust. 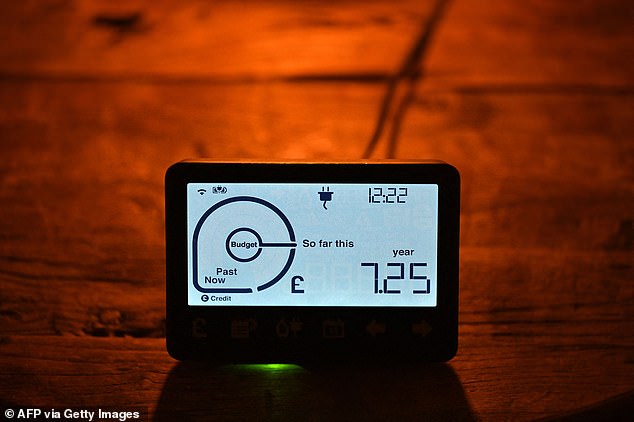 Q&A: Can I sign up for the scheme that will pay me to use less electricity? How will it work?

The National Grid will run events asking customers to reduce their electricity use during a set time.

26 companies have signed up. They will either invite customers to sign up or allow them to apply via their websites?

Do I have to take part?

What do I need?

To get involved you must have a smart meter that automatically sends half hourly readings.

1. You will get an alert the day before each event, telling them what window they need to reduce energy use in ie 5pm until 6pm.

2. Customer must confirm they are taking part by text or email

3. Use less energy during the event

4. They will save money on your bill and earn credit of up to £20 per day

‘This caused gas prices to go up in 2021. Russia’s invasion of Ukraine then threatened supplies, and this drove up the price of gas even more.’

As mentioned above, the UK can tap into storage sites in Europe if it needs to, even if that is looking a little more precarious this year.

Part of the reason it has to do this is because Britain has some of the lowest amounts of gas storage capabilities in Europe, leaving the market exposed to the supply crunch.

Less than one per cent of Europe’s stored gas is held by the UK, despite us relying heavily on it for home heating and cooking.

Why are electricity prices affected by the gas shortage?

‘The way the energy system is set up ties the price of electricity to gas even though there are more renewables on the grid.’

Will there really be blackouts?

The National Grid is adamant its latest action is just precautionary and it is confident that there won’t be blackouts.

In November last year, energy bosses said blackouts would be a last resort if supplies were low over the winter.

He told the BBC the company was working on a number of scenarios to protect the UK against a supply shortfall, including restarting mothballed coal-fired power stations and paying households and businesses to cut consumption at peak times.

Most energy analysts also believe that the chances of blackouts have receded as gas prices have fallen.

What is being done about it?

The National Grid is activating its Demand Flexibility Service (DFS) for an hour this evening with 26 energy suppliers such as British Gas, EDF, Eon and Octopus Energy.

Families will be paid between £10 and £20 to cut their usage to prevent blackouts on one of the coldest days of the year, amid warnings supplies will be ‘tighter than normal’.

The grid operator also asked for three coal-fired generators to be put on standby in case electricity supplies ran low, but has since stood them down.

The coal plants were due to close in September but have been kept open longer as potential backup while the UK grapples with a disruption to natural gas supplies following Russia’s invasion of Ukraine.

Will turning off a washing machine for an hour really help?

The National Grid certainly thinks so, so much so that the man in charge of the project has refused to rule out rolling out the ‘world-leading’ scheme every winter, saying it will ‘drive forward towards net zero’.

Asked if it could become a feature of British life each winter, Craig Dyke told the BBC: ‘It’s something we strongly believe in. This is the start of something much much bigger’.

More than one million users have signed up for the service. But critics have condemned the decision to open it only to the 29.5million homes and businesses with smart meters, which means just under half the population is ineligible. 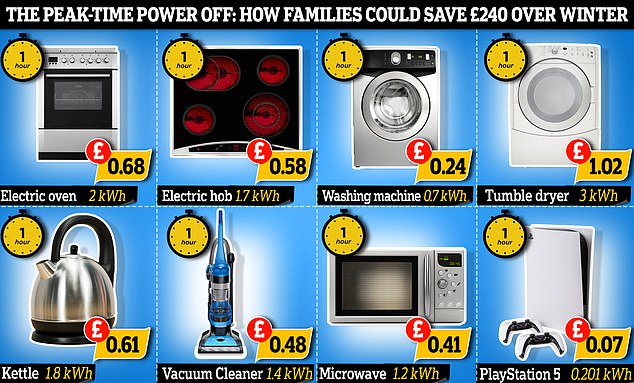 The National Grid is encouraging homeowners to take part in the scheme in a bid to avoid potential blackouts – this is how much they could save. Experts have suggested its customers could save as much as £240 this winter if there are 12 Demand Flexibility Service events called by the National Grid

Supply chain expert Richard Bartlett said: ‘The blackout scheme just seems like another gimmick. I can’t see how it’s going to work. It’s just the Government’s way of rolling through situations without tackling the issue’.

Mr Bartlett said he is worried about the number of people who may be without heating. He added: ‘The savings that it is going to amount to doesn’t seem worth the amount of work involved. I can’t see myself doing it and I can’t see many others doing it either.’

It’s fair to say that this scheme is unlikely to have a big impact on Britain’s energy usage un the short-term.

But what the National Grid and energy bosses are banking on is that it leads to a change in attitudes towards energy usage and encourages people to save power.

Time will tell if that will be the case.

What can you do to reduce your energy bills?

He says behaviour change is important when it comes to Britons and their energy usage.

‘What needs to happen is finding a way to be smarter with energy use,’ Mr Sait said.

‘This can start with the least cost-effective way — behaviour. i.e. not just turning your heating off but checking when your timer is set, and switching off appliances/boilers that aren’t in use.

‘Or, it can be low-cost, sustainable swaps. The most obvious is a swap to the LED lightbulb — you will be using fewer units of energy and it works out to be a big saving.

‘Not everyone can afford big solar panels, electric cars and so on, so education, behaviour change, community and coming together will make the biggest difference.

‘There’s always more to be done on our end — people just need the facts to know where to begin.’

What is the Demand Flexibility Service and how does it work?

National Grid has warned that there could be blackouts this winter if gas power plants are not able to keep running due to the energy crisis.

The electricity systems operator said it is still unlikely but winter could see the first planned blackouts, which the grid calls rota load shedding, since the 1970s.

To try to avoid this happening they introduced the Demand Flexibility Service.

It means domestic users, plus some businesses, will be ‘incentivised for voluntarily flexing the time when they use their electricity’.

Most demand happens during peak hours of between around 4pm and 7pm when people get home from work, put the kettle on, switch on their ovens and sit down to watch TV.

The scheme gives money to people who simply use less power at this time. The overall amount of electricity that people use does not have to reduce if they just change their usage to other times of the day.

For instance, electric cars could be unplugged during these hours, switching the dishwasher on could wait until 9pm and you could put the washing machine on earlier in the day or during the weekend.

To qualify households have to have a smart meter.

Engineers working on the energy grid need to make sure it is ‘balanced’ at all times.

This means that the amount of electricity being put into the grid by power plants, wind farms and others should match the amount being taken out by households and businesses at any given time.

The grid plans for when it thinks demand can be high so it can ask generators to meet that demand.