Follow
Home » Science » Cats DO love sitting in boxes, even if it's an optical illusion

If it fits, it sits! Cats love sitting in boxes so much that they will mentally fill in the blanks of an optical illusion to make a square so they feel more secure while sitting

Cats love to sit in boxes so much, they’ll even plop down in a square painted on the floor – and a new study finds they will even choose an optical illusion that looks like a square.

Animal behaviorists tested their love for boxes with a Kanizsa square, which tricks the eye into thinking there’s a square using four Pac-Man-like wedges placed in each corner.

As it turns out, cats’ minds fill in the gaps just like humans, as the four-legged subjects sat in the illusionary squares as often as the ‘real’ ones during experiments.

The felines sat with all limbs inside the optical illusions for three seconds, which may suggests it is the shape that makes them feel safe and not just the structure.

In an animal behavior experiment, researchers wanted to see if cats would sit in a Kanizsa square, four Pac-Man-like shapes placed in the corners to create the illusion of a square

Gabriella Smith, a graduate researcher in animal cognition at the City University of New York organized the experiment, which involved recruiting 30 cat owners to set up shapes on the floor and see which attracted their felines.

One was a square made out of tape, and another was a Kanizsa square, four wedge-like shapes placed in each corner to create the illusion of a square.

As a control, participants also created a third shape using the wedges, but not arranged to suggest a square.

Owners were made to film their cats’ responses, and donned dark sunglasses so they couldn’t influence their pets’ behavior. 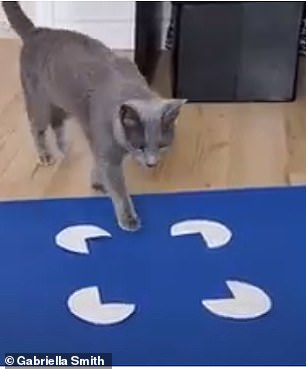 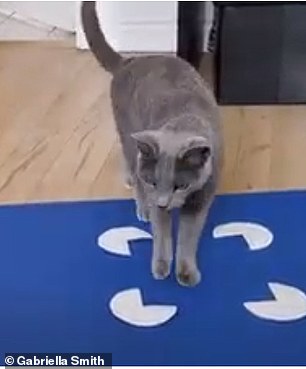 Of the 30 cats in the experiment, nine sat in the square (real or illusion) with all four limbs for at least three seconds

Smith was inspired to develop the project after hearing a lecture on dogs’ susceptibility to optical illusions.

‘Cats like boxes and even shapes outlined on the floor,’ she told Gizmodo. ‘Would they sit in a box that is an illusion?’

A Kanizsa illusion (left) uses four Pac-Man-type wedges to create the illusion of the contours of a square. As a control, participants also arranged the Kanizsa wedges so they didn’t create a square (center)

As it turns out, they would: The cats stood or sat in the real square and the Kanizsa illusion more often than in the control, according to Smith’s report, ‘If I Fits I Sits: A Citizen Science Investigation into Illusory Contour Susceptibility in Domestic Cats,’ published this week in the journal Applied Animal Behaviour Science.

Nine cats sat in the square (real or illusion) with all limbs for at least three seconds.

The cats selected the Kanizsa illusion just as often as the ‘real’ square. 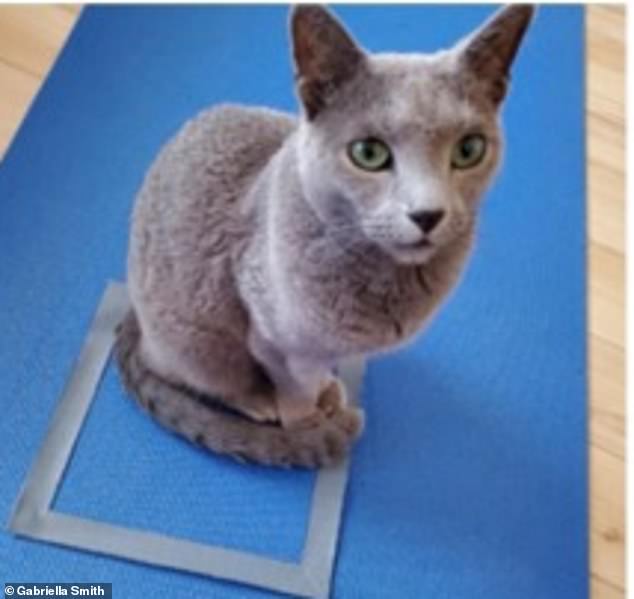 Cats think squares on the floor are just boxes without walls, providing ‘security and comfort to the cat even though it is misplaced’

That tendency reveals a ‘susceptibility to illusory contours and supporting our hypothesis that cats treat an illusory square as they do a real square,’ Smith wrote.

Smith had her participants conduct their experiment in their homes, where the cats were presumably most at ease.

Learning how animals perceive visual illusions adds to our understanding of vision across species and its interplay with mental processes. 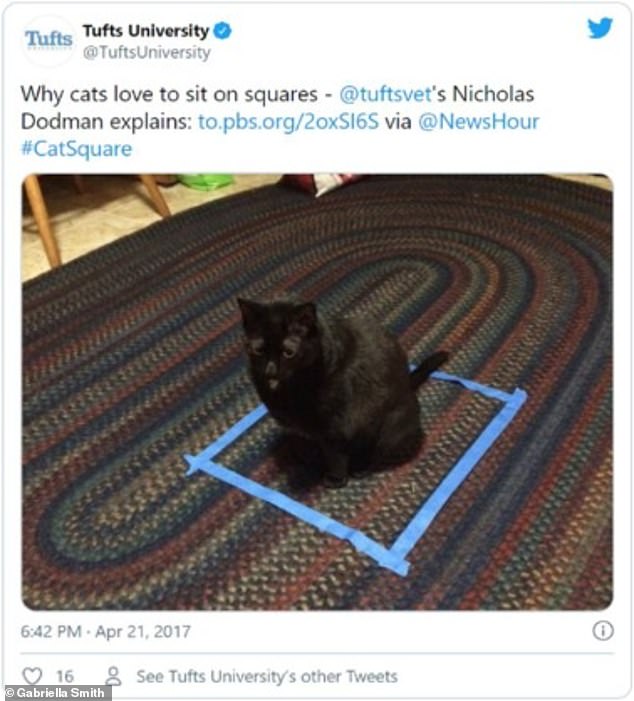 The cats stood or sat in the real square and the Kanizsa illusion more often than in the control, suggesting cats, like humans, are susceptible to illusory contours

‘Cat cognition research is certainly lacking in comparison to domestic dogs, and although the reason for this is unclear, the use of citizen science as a precursor to in-lab investigations of cat cognition could greatly help bridge this divide,’ the authors wrote.

Cats’ love of boxes comes from seeking security, experts say: The close quarters remind them of cuddling with their mothers and the walls of the box provide some protection from possible predators.

As for squares on the floor, the cat thinks they’re just boxes without walls, veterinarian Michelle Burch told Reader’s Digest. ‘The area provides security and comfort to the cat even though it is misplaced.’

boxes, Cats, Do, in, love, sitting
You may also like: