The 21-ton carcass of a Chinese Long March 5B is expected to deorbit sometime this weekend, although astronomers have been unable to pinpoint an exact crash site. The rocket’s booster stage has been trapped in orbit after launching the core module of China’s new space station on April 29. Instead of immediately falling back to Earth, the rocket reached orbital velocity and has been circling the planet at speeds of about five miles per hour.

But the rocket debris cannot stay in orbit indefinitely and the planet’s gravitational tug and atmospheric drag will soon pull it down to the surface.

Astronomers estimate the debris (CZ-5B R/B) will deorbit sometime before May 10, possibly on Saturday or Sunday.

The wild orbit has led to fears the rocket could crash into a populated area – and it would be among the biggest crashes of a man-made object since NASA’s Skylab space station in the 1970s.

How to watch the Chinese rocket live online:

Courtesy of the Virtual Telescope Project in Italy you can watch the rocket tumble across the night sky, live from the comfort of your home – as long as you don’t mind staying up late.

Simply tune into the embedded video player above, starting at 3.40am BST (2.40am UTC).

Dr Gianluca Masi, an astrophysicist and head of the Virtual Telescope, said: “The re-entry is expected to happen around May 9 and, before that, we will try to share with you this unique view, live!

“The Virtual Telescope Project offers you the opportunity to see the Long March 5B rocket body during one of its final passes across the stars.” 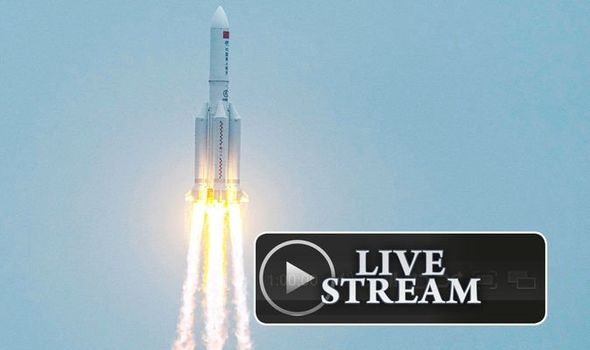 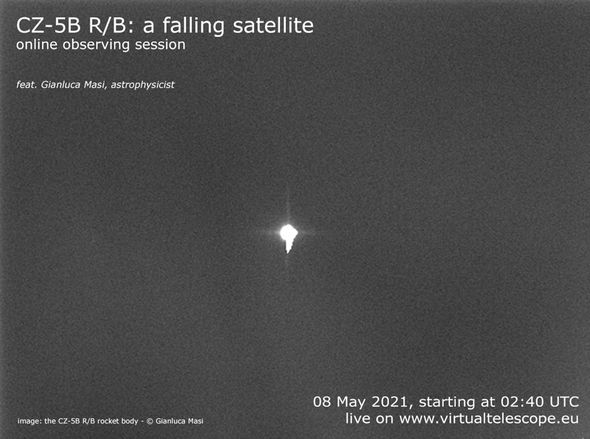 US trackers suggest the rocket will hit the planet sometime between 3pm on Saturday and 9am on Sunday.

Projections by the European Space Agency (ESA) meanwhile indicate a reentry at 4.15am BST (3.15am UTC).

Because of the rocket’s breakneck speed and orbit, there is no telling where the debris will crash.

US Defence Secretary Lloyd Austin said on Thursday the rocket will most likely land in the ocean “or someplace like that”.

Most of the planet’s surface is covered in water so the chances of the debris hitting a populated area are low. 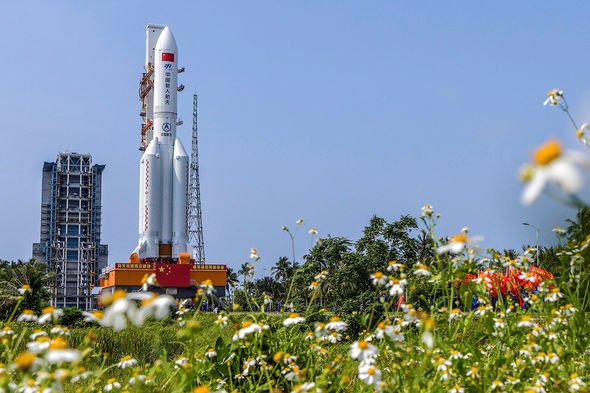 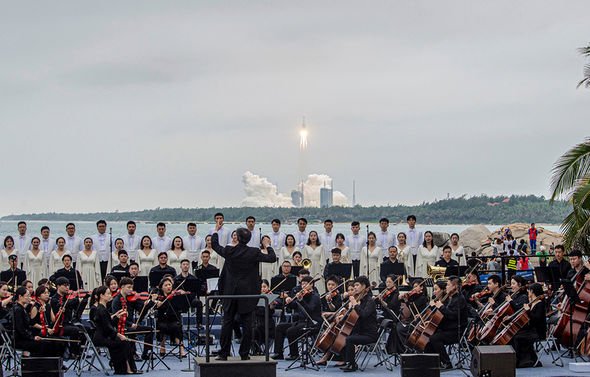 Lia Rovira of EarthSky.org said on Thursday: “With all of the above said, the most likely possibility is the core stage will fall in an uninhabited area.

“After all, Earth’s oceans cover 70 percent of our planet, and thus most returning space debris does fall into the ocean.

“It’s possible, though, that some debris will fall on land.”

Astrophysicist Jonathan McDowell of Harvard University has been tracking the rocket debris all week.

He warned there is a small chance of some rocket parts hitting the ground.

The astronomer said: “Last time [China] launched a Long March 5B rocket, they ended up with big long rods of metal flying through the sky, damaging several buildings in the Ivory Coast.”

He also blasted China for allowing the situation to develop, criticising the rocket’s design.

He tweeted: “This was not an accident, it was poor design of the rocket.

“The fact that the massive core stage stays in orbit is how this rocket is designed, and that’s the easy (but negligent) way to do it.”