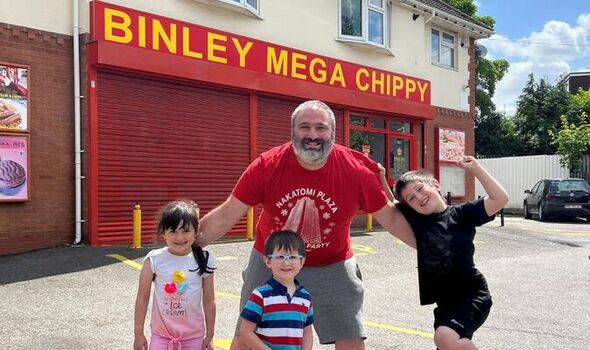 Simon Harris drove his four children from Essex to TikTok sensation Binley Mega Chippy in Coventry on June 19 only to discover it was closed on Sundays. The overall journey took five hours and twenty-five minutes. But seven-year-old Luke, five-year-old Emma, four-year-old James and one-year-old Thomas alongside dad Simon took the disappointment well.

Simon, 38, told Essex Live: “The kids were more excited than I was to go to the chippy.

“Luke and Emma love watching TikTok videos. I save a lot of videos for them to watch. There was one point where you couldn’t move for Binley Mega Chippy videos with that catchy tune. They were all singing the song. I was mildly curious about it due to my line of work.

“I was quite wary about the cars and car meets there, I’ve seen videos on TikTok of people doing burnouts and I wanted to get there early in the day before it closed. There were four or five other groups of people there too who had obviously done the same thing.

“There’s a sign saying closed on Sundays but on Google it says open. To be fair I was just glad we were there. I was glad the kids took it so well, it was great to be there and get a couple of pics of it. The owner came out and thanked us for the support and was in disbelief over the popularity the place has got. It was a little bit disappointing. We ended up walking around there and having giant pizzas so it wasn’t a wasted journey.” 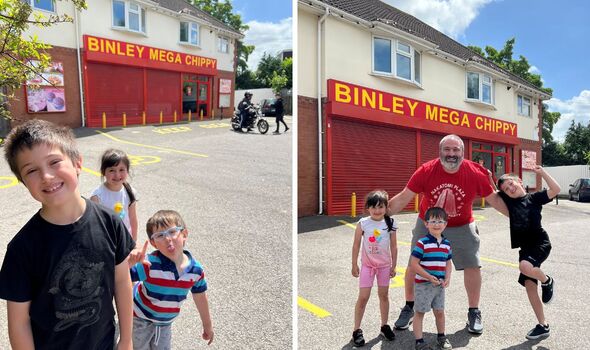 Owner of Binley Mega Chippy Kamal Gandhi, 70, saw a 30% increase in profits when tens of thousands of fans visited the chippy last month. Mr Gandhi, who has run takeaways for 30 years but took over Binley Mega Chippy seven months ago, said: “The whole thing has gone crazy. “Everyone who comes here is very excited and we love giving them what they want which is great food.

“I hope this is no flash in the pan and they keep coming back.” Since the chippy went global, Mr Gandhi and his 10-strong family who run the takeaway, have had customers from as far away as Australia and Texas eager to try his grub.

Simon, who runs his own blog page called Man Behaving Badly, admitted he’d been trolled online since his failed chippy trip. He said: “People were saying ‘why are you wasting petrol’ ‘why are you dragging kids halfway over the country’ and that ‘we’re going through a cost-of-living crisis’.

“The kids wanted to be there. You can’t do anything these days, on the internet or in general. I don’t know what it is, it’s just a day out with the kids.

“It’s not like I went out for afternoon tea with the Taliban, we just went out.” Despite the unlucky outing, Simon has not ruled out travelling to other viral hits in the future.

He added: “If something else goes viral I would travel, but I would not be so trustworthy of Google. In future, I may ring ahead just to make sure. Since going, our local fish and chip shop in Hockley they’ve just started making TikTok videos as well and they’ve just invited us down. It’s only down the road.”