Experts take sharpest ever image of the Large Magellanic Cloud

Scientists have captured the sharpest radio image of the Large Magellanic Cloud (LMC), a satellite galaxy of the Milky Way that sits 158,000 light-years from Earth, revealing thousands of never-before-seen radio sources, including galaxies.

Radio sources are various cosmic objects in the universe that emit large amounts of radio waves and can include nebulas and stars, as well as galaxies.

The research, led by Keele University in the UK, used the Australian Square Kilometer Array Pathfinder (ASKAP) telescope to ‘photograph’ LMC at radio wavelengths, allowing scientists to measure nearby stars and distant galaxies.

Most of the radio sources come from galaxies ‘millions and billions of light years beyond the Large Magellanic Cloud,’ lead author Clara Peennock from Keele University said in a statement. 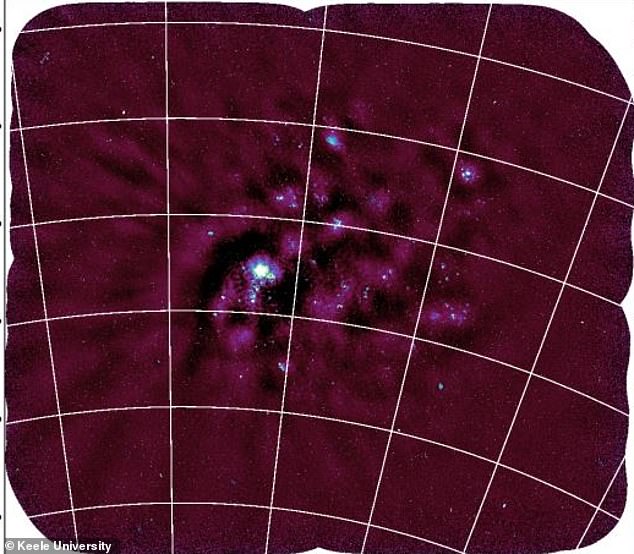 Scientists have captured the sharpest radio images (pictured) of the Large Magellanic Cloud (LMC), a satellite galaxy of the Milky Way that sits 158,000 light years from Earth, revealing thousands of never-before-seen radio sources

‘We typically see them because of the supermassive black holes in their centers which can be detected at all wavelengths, especially radio,’ Peennock continued.

‘But we now also start finding many galaxies in which stars are forming at a tremendous rate.

‘Combining this data with previous observations from X-ray, optical and infrared telescopes will allow us to explore these galaxies in extraordinary detail.’

The Large Magellanic Cloud is one of the closest galaxies to the Milky Way. 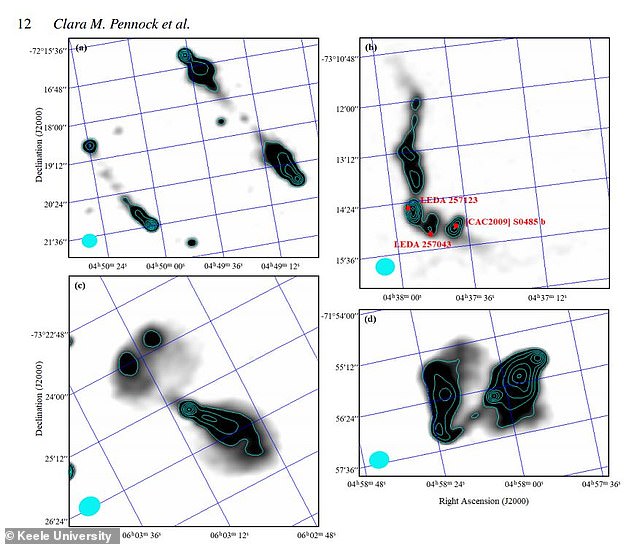 Most of the radio sources come from galaxies ‘millions and billions of light years beyond the Large Magellanic Cloud,’ lead author Clara Peennock from Keele University said in a statement. Pictured are various objects emitting radio waves

The very first recorded mention of the Large Magellanic Cloud was by Persian astronomer Shirazi, in his Book of Fixed Stars around 964 AD.

The Magellanic Clouds can be seen in the night sky with the naked eye and have been observed by ancient cultures for thousands of years.

They were the closest known galaxies to the Milky Way until recently, when the Sagittarius and Canis Major dwarf galaxies were discovered and found to be even closer.

Along with capturing the sharpest radio images of the Cloud, researchers were able to look deep into the Tarantula Nebula, the most active star-formation region in the Local Group.

The Tarantula Nebula is a massive ionized-hydrogen region that is made up of a cloud of interstellar gas, which is lit from within by young, hot stars that ionize the gas around them, according to Britannica,

The nebula is located about 160,000 light years from Earth, located in the the constellation of Dorado (The Dolphinfish) in the far southern sky.

Dr. Jacco van Loon, Reader in Astrophysics at Keele University said in a statement: ‘With so many stars and nebulae packed together, the increased sharpness of the image has been instrumental in discovering radio emitting stars and compact nebulae in the LMC.

‘We see all sorts of radio sources, from individual fledgling stars to planetary nebulae that result from the death of stars like the Sun.’

This study, published in Monthly Notices of the Royal Astronomical Society, is part of the Evolutionary Map of the Universe (EMU) Early Science Project, which will observe the entire southern sky and is predicted to detect around 40 million galaxies.

This data will give researchers a clearer picture of how galaxies, and their stars, have evolved throughout time and hopefully reveal secrets of our early universe.

Co-author Professor Andrew Hopkins, from Macquarie University in Sydney, Australia, and leader of the EMU survey, added: ‘It’s gratifying to see these exciting results coming from the early EMU observations. 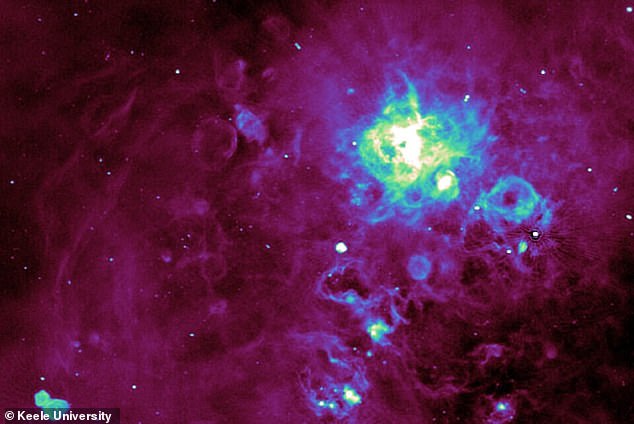 Along with capturing the sharpest radio images of the Cloud, researchers were able to look deep into the Tarantula Nebula, the most active star-formation region in the Local Group

‘EMU is an incredibly ambitious project with scientific goals that range from understanding star and galaxy evolution to cosmological measurements of dark matter and dark energy, and much more.

‘The discoveries from this early work demonstrate the power of the ASKAP telescope to deliver sensitive images over wide areas of sky, offering a tantalizing glimpse of what the full EMU survey may reveal.

‘This investigation has been critical in allowing us to design the main survey, which we expect will start in early 2022.’

ever, Experts, ima, Sharpest, take
You may also like: