Experts are warning about a new ‘dangerous’ TikTok trend where people are creating homemade radiators from candles and terracotta plant pots.

Users are placing an upside down terracotta pot over a group of lit candles to create a miniature heater that will warm their homes.

Tutorials promote it as a ‘cost of living hack’ which will help people to save money on their heating bills.

However, experts from London Fire Brigade have warned that the trend is dangerous, as the outside of the pot will get very hot and creates a burn risk.

Moisture can also get trapped inside the clay after watering plants, which could quickly evaporate with the heat and cause the pot to explode.

The Brigade’s Assistant Commissioner Charlie Pugsley said: ‘Candles are one of the most common causes of fires in the home and they shouldn’t be used for anything other than their intended purpose.

‘Although life hacks can be handy, so many of them have the potential to be dangerous, and we would urge people not to follow videos online if they could put you or others in danger.’ 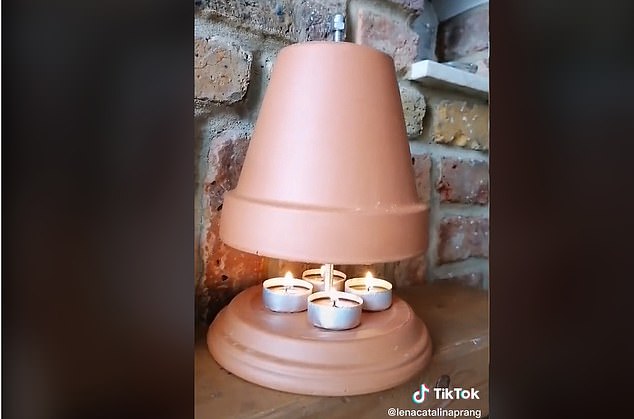 Fire experts from London Fire Brigade have said that the trend is very dangerous, as the outside of the pot will get very hot and creates a burn risk

WHAT IS THE ‘TERRACOTTA POT HEATER’ TREND?

TikTok users are placing an upside down terracotta pot over a group of lit candles, to create a miniature heater.

Tutorials promote it as a ‘cost of living hack’ which will help people to save money on their heating bills.

However, experts are slamming the hack as it creates a risk of fire and explosion.

Videos explaining how to set up a terracotta pot heater began circulating on TikTok at the start of 2021, but have recently gained more attention as it starts to get colder.

The hashtag ‘#terracottapotheater’ has been used on videos with over two million views in total.

With the cost of living going up in the UK and around the world, many people are frantically looking for any way to save on heating their homes.

But, according to the London Fire Brigade, this homemade heater is not the way to do it.

The fire and rescue service was forced to issue a warning back in 2013, after a YouTube video went viral that showed man heating his study using tea light candles and flower pots.

In the clip, the man claimed he can heat his study for only 8p a day.

Mr Pugsley said: ‘We understand people are concerned about the cost of living and are looking for cheaper ways to heat their homes.

‘But as firefighters, we do sadly see the devastating results of when things go wrong and we have to highlight the risks involved.’

Terracotta plant pots are made from a baked clay, which allows water to pass through it easily in order to prevent the plant’s roots rotting.

However it also means that pockets of moisture can get trapped within the clay, which could remain, even if it looks to be dry.

If heated by candles, these pockets of water could quickly evaporate and the gases burst through the clay in a dangerous explosion

The candles themselves present their own fire risk, as if the pot gets knocked over or there is a small gust of wind any nearby flammable objects could catch alight.

They also produce soot, particularly when there is not a consistent flow of oxygen available as a result of the pot covering the flame.

When inhaled, soot settles deep in the lungs, and has a similar effect to passive smoking.

Paraffin wax candles also release small amounts of toxic chemicals such as toluene and benzene, which are known to increase the risk of lung cancer.

A single candle is unlikely to do any damage, but these chemicals could become a problem if the heater is used consistently or in a poorly ventilated room.

If you are to use a candle to help heat a room, it must always be supervised and should not have any coverings. A hot water bottle is a safer alternative.

Mr Pugsley added: ‘We would always recommend people swap to using safer LED candles rather than flame ones, but if you are using them they should never be left unattended.

‘It’s also important people have working smoke alarms and know what to do in the event of the fire.

‘For tips on how to keep safe from fire, take a look at the Brigade’s Home Fire Safety Checker which will give you advice tailored for your home.

‘If you’re struggling to pay your energy bills, Citizens Advice can give you information on grants and benefits that can help you.’

Heat from the sun is free so make the most of it.

Open your curtains and let the sunlight in during the day to make use of this free heat.

When it gets dark, shut your curtains, which act as another layer of insulation and keep warmth in your rooms.

You should also make sure you don’t have any leaks or gaps so that the warm air can stay in and the cold air stays out – this also helps to reduce condensation.

2. USE TIMERS ON YOUR CENTRAL HEATING

The Centre for Sustainable Energy advises that programming your boiler to turn the heating on a little earlier – such as 30 minutes before you get up in the morning – but at a lower temperature is cheaper than turning it on just as you need it at a higher temperature.

But don’t make the mistake of leaving your heating on low all day – because then you’re just paying for heat when you don’t need it.

It might feel great to have your favourite seat in front of the radiator, but it’s absorbing heat that could be warming your home.

By moving it away from the radiator, hot air can circulate freely.

The same goes for your curtains or drying clothes – keep them away from the radiator so that you can get the most out of your heat source.

When it comes to heat, around 25 per cent is lost through the roof.

This can be easily reduced by installing 25cm of insulation throughout your loft.

It’s also worth seeing what’s going on in your walls, as around a third of the heat in an uninsulated home is lost this way.

Although it’s not as cheap to install as loft insulation, cavity wall insulation could save up to £160 ($198) a year in heating bills.

It’s also worth checking with your energy supplier to see if they have any insulation schemes running – which can sometimes mean cheap or free installation.

If you have a hot water tank, make sure it is properly lagged – or insulated.

This will keep the water warmer for longer, and reduce heating costs.

The Energy Community says that insulating an uninsulated water tank could save up to £150 ($185) a year – but even just upgrading your tank’s ‘old jacket’ will help to save money.

6. TURN DOWN THE DIAL

Research shows that turning your thermostat down by 1°C (34°F) could cut your heating bill by up to 10 per cent.

The World Health Organisation previously recommended a minimum temperature of 21°C (70°F) in the living room, but Public Health England revised this to 18°C (61°F) in 2014.

So keep the dial at 18°C (61°F), save money and avoid the negative impacts of a cold home.

7. BLOCK OUT THE DRAUGHTS

Even a simple solution such as a making your own sausage dog draught excluder will help keep the warmth in your home.

The Energy Saving Trust estimates that DIY draught-proofing your doors, windows and cracks in the floor could save £25 ($31) per year.

Self-adhesive rubber seals around doors and windows and door draught excluders are relatively cheap and easy to install.

Research at the University of Salford has shown that installing heating controls and theromostatic radiator valves results in energy savings of 40 per cent compared to a house with no controls.

These work by allowing you to programme your heating to come on at predefined times – so you only use energy when you need it.

New smart thermostats can also be controlled remotely via your mobile so you can turn on your heating on the way home, ensuring it’s nice and toasty when you arrive.

If your boiler is more than 10 years old, it may be time to replace it with a new, more efficient model.

Depending on your old boiler type and house, you could save up to £350 ($433) with a new A-rated condensing boiler – which uses less energy to produce the same amount of heat.

Plus, if it’s new, you’re less likely to have any issues going into the winter season.

Radiator panels are relatively cheap, easy to install, and ensure that heat from your radiators warms up your room and not your walls.

They work by reflecting the heat back into the room.