Bannon gets 4 months in prison for contempt of Congress

Steve Bannon, a former top adviser to Donald Trump, was sentenced Friday morning to four months in prison and a $6,500 fine for criminal contempt of Congress after defying a subpoena from the Jan. 6 committee.

The judge will hold off on imposing the sentence if Bannon files an appeal before Nov. 15, which his team has signaled he is ready to do.

‘Today was my judgment day,’ Bannon said on leaving court. ‘On November 8th its going to be judgment day on the illegitimate Biden regime and quite frankly, Nancy Pelosi and the entire committee.’

‘Either they’ve already been turfed out like Liz Cheney …. or they’re about to be beaten.’

‘The Biden administration ends on the evening of the 8th of November,’ Bannon said, then predicting Attorney General Merrick Garland would be impeached by a Republican Congress.

‘Merrick Garland will end up being the first attorney general that’s brought up on charges of impeachment. He will be removed from office.’

Judge Carl Nichols agreed with the Department of Justice (DOJ) that Bannon had showed ‘no remorse’ for his actions and ‘attacked the select committee at every turn.’

He said that Bannon has ‘yet to demonstrate that he has any intention to comply with the subpoena.’

‘He is nothing but a thug. I wouldn’t believe a thing he says, one of what one might call the Three Stooges… He has lied to me personally. He has ripped me off personally.’ 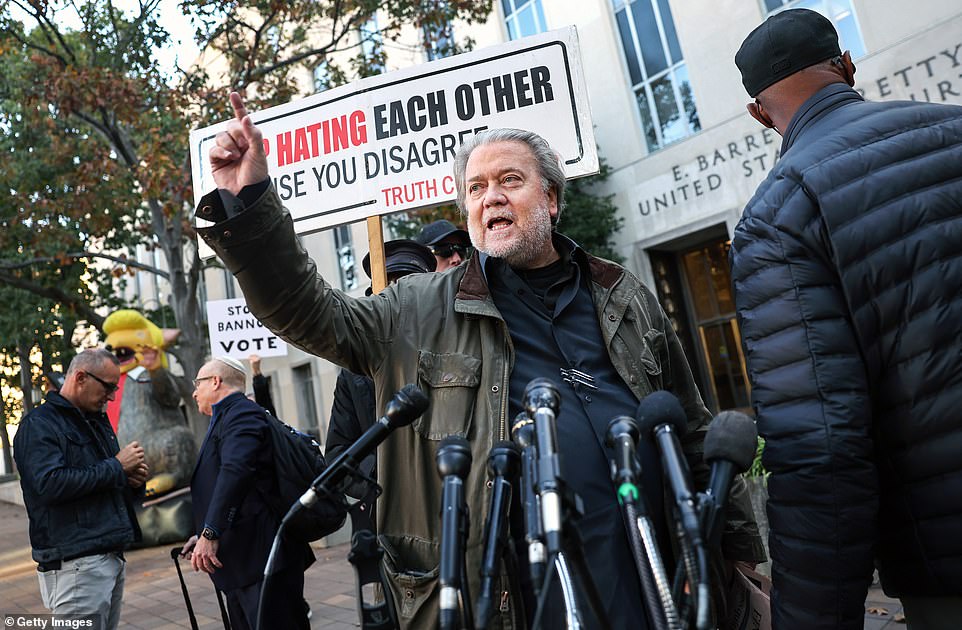 Bannon speaks to the media as he arrives at federal court to be sentenced on October 21, 2022 in Washington, DC 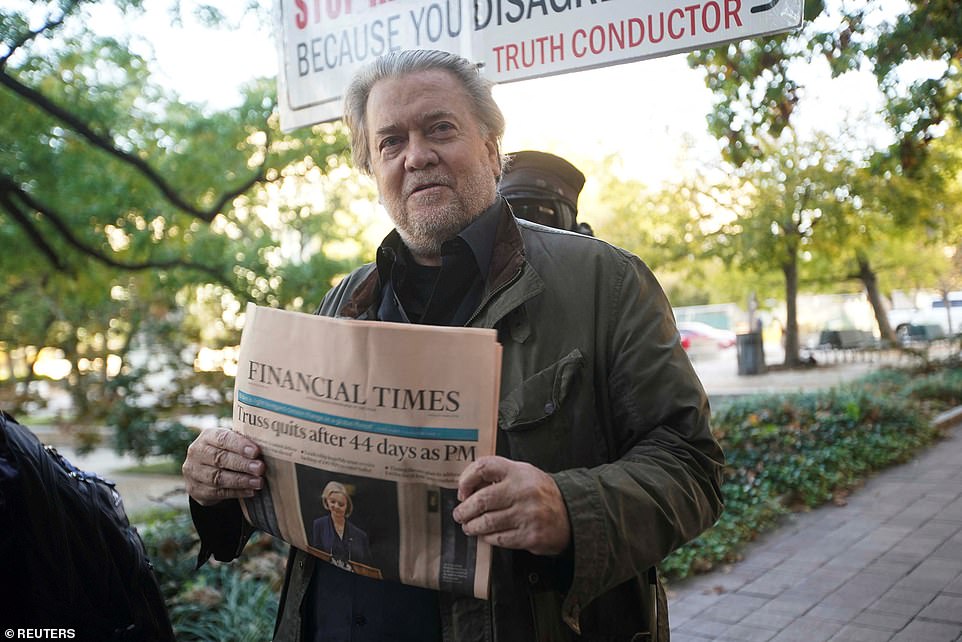 He said the fact that the committee did not go to court to try to enforce the subpoena but immediately went to criminal prosecution ‘cuts in Bannon’s favor.’

However, the judge noted the importance of honoring the authority of Congress and said ‘others must be deterred from committing similar crime.’

As he walked into the courthouse Friday morning, Bannon told a group of reporters: ‘Remember this is an illegitimate regime. Their judgment day is on the 8th of November when the Biden administration ends.’

‘By the way, and remember: Take down the CCP,’ Bannon added, comparing the Biden administration to the Chinese Communist Party.

The Trump strategist did not speak during his sentencing.

Bannon, 68, is the first Trump ally to be sent to prison for being tied to the Jan. 6 Capitol riot. He was the first figure to be found guilty of contempt of Congress since Attorney General Richard Kleindienst and Watergate burglar G. Gordon Liddy were convicted in 1974.

The charge is only a misdemeanor, but DOJ had recommended a six month prison sentence and $200,000 fine, with prosecutors claiming that he showed ‘bad faith’ in approaching the subpoena. Bannon’s attorney had asked for probation.

Each of the two counts of contempt of Congress he faces have a minimum 30 days prison sentence and fine between $100 and $100,000.

‘In my view the statute sets out a mandatory minimum of one month and a mandatory maximum of 12 months,’ the judge said. 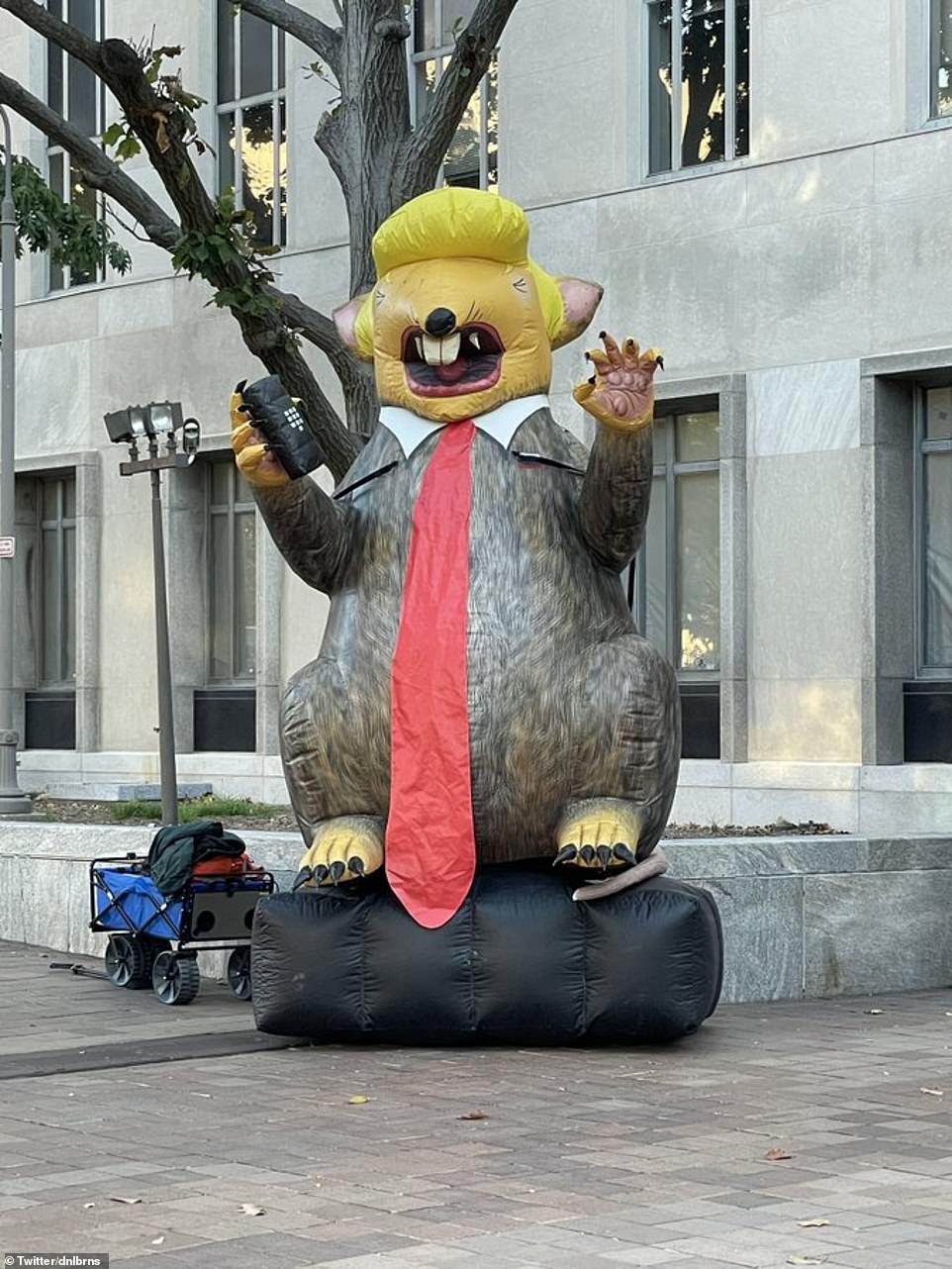 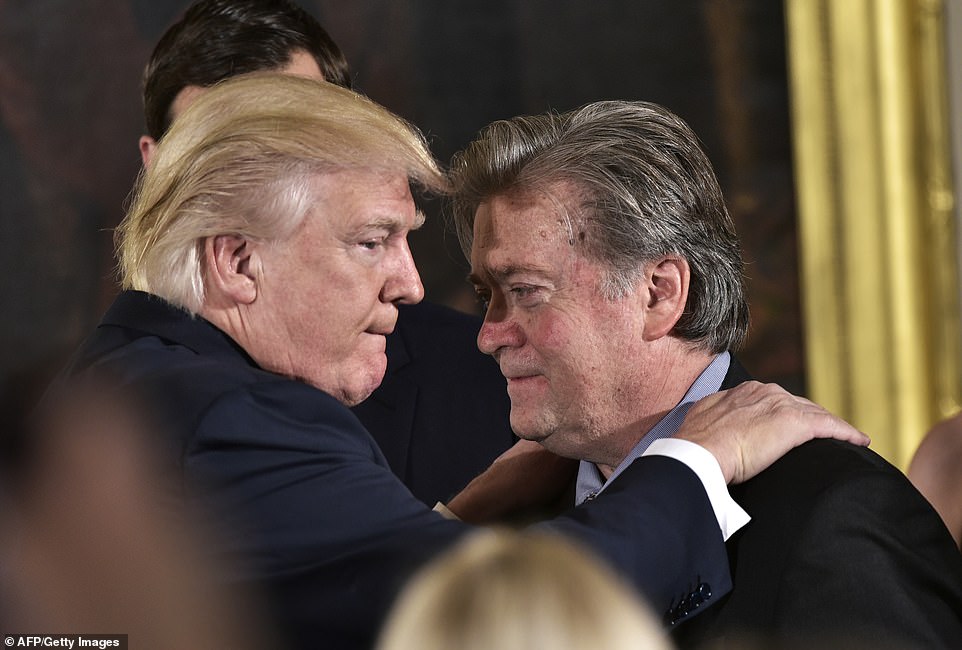 Bannon spoke with Trump at least twice on January 5, attended a planning meeting at the Willard Hotel in Washington, D.C. and said on his podcast, ‘all hell is going to break loose tomorrow,’ according to J6 committee

Schoen argued there is no one month minimum for the contempt charges, but Nichols asserted the minimum.

Schoen argued that Bannon was solely following the constitution when he asserted executive privilege precluded him from testifying. The defense was unapologetic.

A jury convicted Bannon after just three hours of deliberations for refusing to testify or offer documents to the January 6 committee in July.

One day before Bannon was found guilty, the committee played a clip of the strategist saying that Trump planned to declare victory in 2020 no matter what the results were.

According to the committee, Bannon spoke with Trump at least twice on January 5, attended a planning meeting at the Willard Hotel in Washington, D.C. and said on his podcast, ‘all hell is going to break loose tomorrow.’

Another Trump adviser, Peter Navarro, has been charged with contempt of Congress after defying a subpoena and stands trial in November. Former White House chief of staff Mark Meadows and former social media director Dan Scavino were referred by the House for contempt of Congress, but the DOJ declined to mount a prosecution.