Heat pumps are devices that work like a refrigerator in reverse, moving heat from the air or ground outside a building to its inside, through the circulation of a refrigerant. In the case of an air source heat pump, for example, thermal energy from the atmosphere — while it may be colder than the air inside the building in question — is nevertheless warm enough to cause the liquid refrigerant to evaporate into a gas.  This gas is then passed through a compressor, which increases the pressure of the gas and causes its temperature to rise at the same time. The heat from the gas can then be used to warm up the building, while the refrigerant cools and returns to its original, liquid state, allowing for the process to begin anew. Heat pump systems can be installed individually, or — as is popular in many Nordic countries — can be scaled up to supply hot water to many buildings at once as part of a so-called “district heating scheme”.

The result of a collaboration between the local council and heat pump specialists Kensa Contracting, the project in Thurrock manages to combine these approaches in a clever way.

At the heart of the system will be an array of 107 vertical boreholes, each a whopping 885 feet deep — five times longer than the tower blocks are tall — into which is laid a U-shaped pipe filled with a liquid coolant similar to antifreeze.

Similar to a ground-source district heat pump system, this liquid will extract heat from the underlying chalk bedrock and bring it up to the surface, typically increasing in temperature from 41F (5C) to 50F (10C) for each loop underground and back.

However, instead of running the coolant through a central compressor, it will be fed up into the three tower blocks first, where each of the 273 flats will have its own pump to extract energy to supply both heating as well as hot water.

In this way, explains Kensa Contracting Managing Director David Bloom, one does not suffer the heat loss that would be caused by pumping hot water around the towers, while each flat need only pay for the electricity needed to operate its own heat pump, and are free to shop around to find the best supplier to meet their needs.

To date, Kensa has completed 30 boreholes — nearly a third of the total needed to meet the heating requirements of the three tower blocks — since construction began around a month ago, with the remainder expected to be finished within a couple of months.

It is expected that all three tower blocks’ new heating systems will be ready to be brought online by April or May next year. 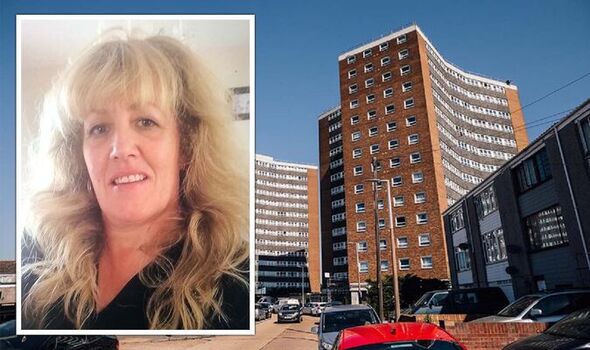 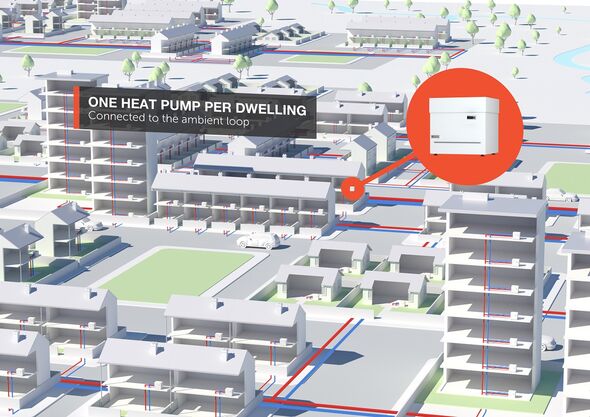 At present, heating in the tower blocks is natively provided by means of storage heaters. These were designed to take advantage of relatively low electricity costs at night to warm up internal bricks, which then give off heat continuously as they cool.

The problem with these devices, George Tilbury House resident Diane Barr told Express.co.uk, is that they just don’t store enough heat — and often go cold by the middle of the afternoon.

Alongside this, they tediously need to be set up the night before you want to use them — meaning that there’s an unpleasant price for forgetting to turn them on.

As a result, she explained, she and her neighbours end up resorting to piling on extra layers, digging out the blankets, and making liberal use of electric radiators — although the latter, of course, cost more money to operate. 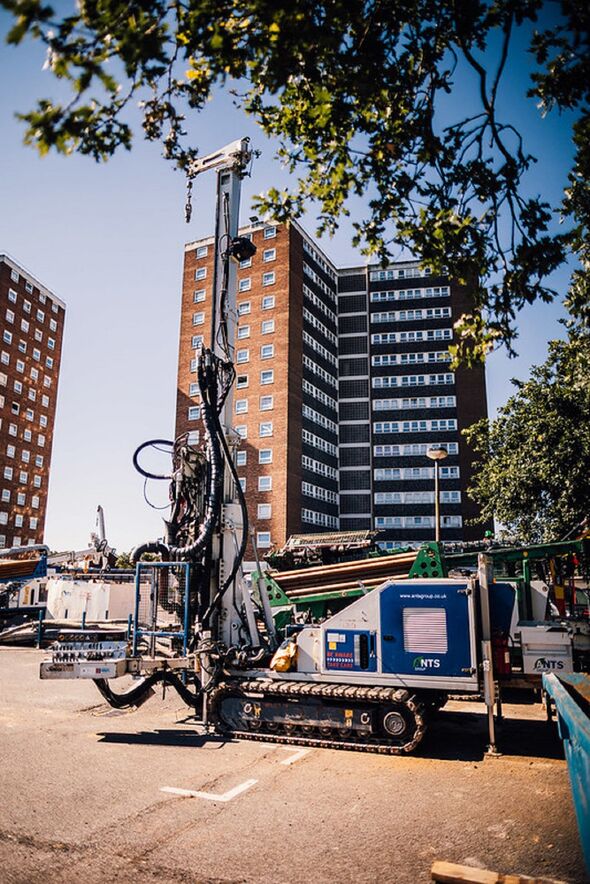 Ms Barr, 55, has been living in George Tilbury House with her son for the last 16 years. She sums up the existing storage heaters in one word: “Expensive.”

She added: “Last year I had three on. I don’t have one [on] in the bedroom… In November, before [the prices] went up the first time it was about £45 per week.

While Ms Barr and her neighbour have not had the heating on over the summer, with the warmer weather, they are expecting bills this winter to be around £90 a week.

She added: “It’s not nice. We all moan.” Come winter, she explains, the other tenants often moan about how much they’re putting on yet they’re still not warm, even though some have babies, and how the flats are freezing and they get damp and mould as well.

For Ms Barr, certainly, the new heating system is long overdue, and will mean so much money-wise.  On the installation, she said: “I’m really pleased. About time!”

Naturally, the tenants have to put up with the drilling around the building for a couple of months — most, Ms Barr notes, are more annoyed by the temporary loss of parking spaces than the noise — and replacing each flat’s storage heaters with a heat pump and new water tank is expected to take three-four days.

However, Ms Barr said: “It’s well worth it. It’s gonna be more economical for us and obviously better for the environment.”

Gone will be the need to wrap up in multiple layers indoors, Mr Barr noted. In fact it’ll be so warm in the winters, she joked, that she’ll be able to walk around her flat “with nothing on!” 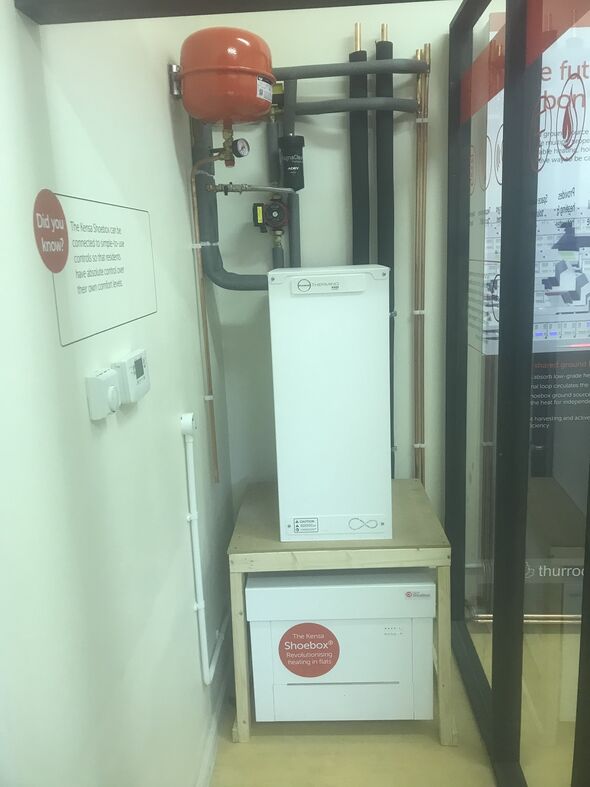 Kensa Contracting’s Director of Low Carbon Partnerships, Ieman Barmaki said the system has the potential to slash energy costs from the storage heaters by 66–70 percent.

He added: “So, that dramatically impacts their ability to pay for heat and have adequate, affordable warmth within their properties — which obviously has medical consequences.”

Furthermore, the total emissions savings from the heat pumps over the life cycle of the installation is expected to be around 7,080 tons of carbon dioxide — the equivalent, Kensa said, “of taking 1,540 cars off the road, significantly improving local air quality and reducing the carbon footprint of the residences.”

To date, Kensa has installed 3,700 heat pumps up and down the country — both within social housing and new build developments — in such locations as Blackburn, Bristol and Manchester.

“If only everybody could get it — then everyone would be benefitting from the cheaper bills, wouldn’t they? And let’s face it, right now everybody is focussed on trying to keep the cost of just about every aspect of your life as low as possible.” 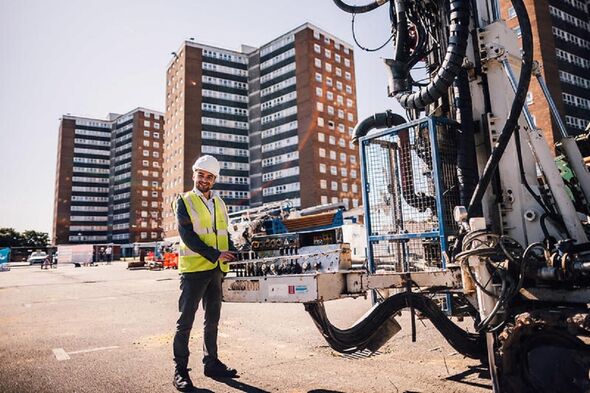 Councillor Luke Spillman is Thurrock’s Cabinet Member for Housing. On the Chadwell St Mary project, he said: “This funding has been specifically granted to deliver a trailblazing heating solution that is the first of its kind for Thurrock Council.

“The old storage radiators and hot water systems in each of the 273 flats will be replaced with a significantly better, cost-effective and greener solution.

“This is great news for our residents, and I would like to thank the government for awarding this funding and helping us better support our residents.”

The project, he added, will help Thurrock Council “tackle fuel poverty by driving down fuel bills and keeping our homes warmer and greener.”

Thurrock secured £2.3million towards the £5million project from the first wave of the Social Housing Decarbonisation Fund.

This scheme — towards which the Government committed an overall investment of £3.8billion in 2019 — is intended to help providers of social housing improve the energy efficiency of their stock while also helping to reduce carbon emissions.

For Kensa Contracting, however, there is much more they could be doing if there was more government intervention — with more funding, local councils could more easily get behind similar projects.

With additional funding, Mr Barmaki explained, it might be possible to integrate solar thermal into such heating systems to make them cheaper to run.

It would also be possible to upgrade the system to support passive cooling, allowing the flats to be cooled down as well as heated up as needed. As it stands, such a facility could be added to the Thurrock tower blocks later on, but it would be cheaper in the long run if it were possible to build that capacity from the start.

Mr Barmaki concluded: “A lot of this stuff really requires pretty strong leadership from the government and making sure that funding is there in the first place to allow local people and local government to be able to make those choices much more simply and efficiently.”