James Bond would have died from STIs, food poisoning and alcohol

Britain’s most famous secret agent James Bond would have died several times over in real life due to a multitude of job-related risks, a new study shows.

In particular, they looked at whether the fictional agent ‘adhered to international travel advice’ during the 86 international journeys he made over the course of the films.

The experts found any real-life agent in Bond’s shoes would have suffered from sexually-transmitted infections (STIs), alcohol poisoning and infections from tropical diseases, as well as other hazards. 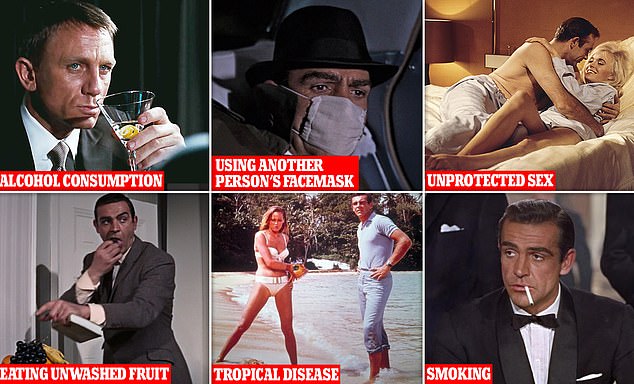 Risks to Bond health in the films made by Eon Productions include alcohol consumption (as seen here in ‘Casino Royale’), using another person’s facemask (‘You Only Live Twice’), casual sex, which risks STIs (‘Goldfinger’), eating unwashed fruit (‘Thunderball’), disease in tropical locations and smoking (both ‘Dr. No’) 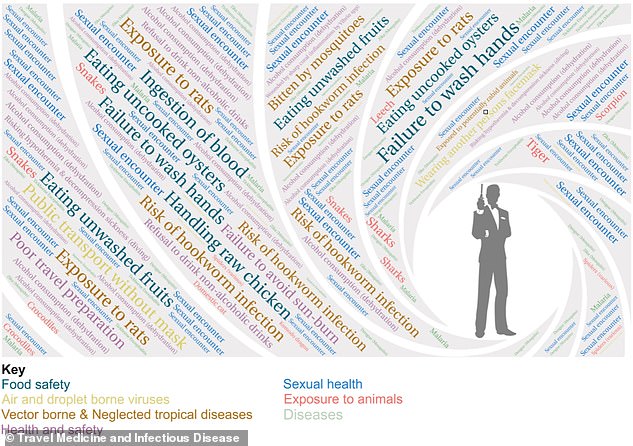 The analysis was conduced by Wouter Graumansa and Teun Bousemaab at the Radboud University Medical Center, Nijmegen, along with William Stone at the London School of Hygiene & Tropical Medicine.

‘Overall, we found Bond poorly prepared for travel-associated health risks and particularly naïve to the threat of infectious disease,’ the team say in their paper.

‘Despite the increased availability of online travel advice, Bond’s risk of acquiring infectious diseases unfortunately did not decline in recent missions.

‘Given the central role that agents with the double-0 status have in international counter-terrorism activities, we sincerely hope that MI6 will take its responsibility seriously.’

Watching all 25 Bond films involved around 3,113 minutes of evening hours for each of the three study authors, which ‘could easily have been spent on more pressing societal issues’, they admit.

For viewings of the most recent film – ‘No Time to Die’, which was released at the end of September – the team were likely the only members of the audience who brought notebooks to the cinema, they point out.

As they watched, the scientists made notes of some of the more foolhardy behaviours that would have cost Bond his life.

Notably, Bond has above-average sexual activity, often ‘without sufficient time for an exchange of sexual history’, which risks STIs.

Researchers found there were a total of 59 on-screen sexual liaisons – an average of 2.4 per film.

There was a ‘remarkably high mortality’ among Bond’s sexual partners, in some cases very soon after the act of love-making.

More than a quarter of his partners do not survive, although there are no clear indications that sexually transmitted infections play a role in any of their deaths.

For example, Jill Masterson in 1964’s ‘Goldfinger’ hooks up with Bond only minutes after meeting him, but soon suffocates after being painted from head to toe in gold paint by the evil henchman Oddjob. 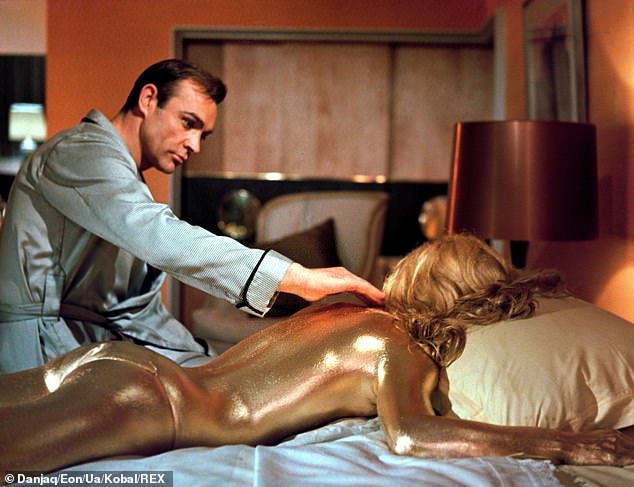 Bond also generally seems ignorant of the ways to avoid respiratory virus transmission, or simply does not care during his missions.

For example, while in Japan in ‘You Only Live Twice’, he covers his face and mouth with a facemask used recently by another person, in an attempt at disguise.

In the era of Covid-19, this is something health officials advise against, as it risks inhaling their recently exhaled, and possibly infected, respiratory droplets.

Given that the SARS-CoV2 virus – the cause of Covid-19 – can be detected on surgical masks for a week after exposure, there’s every chance other respiratory viruses can survive on the fabric too, the authors point out.

Here, in an attempt at disguise in ‘You Only Live Twice’, Bond covers his face and mouth with a facemask used recently by another person. Given that the SARS-CoV2 virus can be detected on surgical masks for a week after exposure, there is every reason to believe that 1960s-era respiratory viruses can survive on such fabric

Bond famously has a taste for vodka martinis, but this may come at the cost of a poor level of hydration, the team also found. 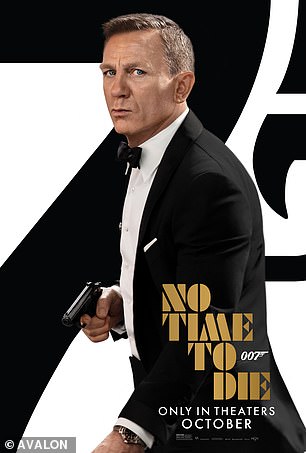 Alcoholic beverages, shaken or stirred, do not prevent dehydration, which is a major concern given the extremes of physical activity he goes to, often in warm climates, they say.

On only three occasions was Bond observed drinking non-alcoholic drinks – orange juice in ‘From Russia with Love’, coffee in ‘Dr. No’ and salt water in ‘Casino Royale’.

The latter is ‘particularly unhelpful in maintaining fluid balance’, they point out, although to be fair, drinking it was Bond’s attempt to vomit and thus avoid a fatal poisoning.

Alcohol consumption has also been shown to increase attractiveness to malaria-transmitting mosquitoes, and more famously damage the liver.

Bond is also a heavy smoker in the franchise’s early films, although since the Daniel Craig era he’s thankfully quit the habit. 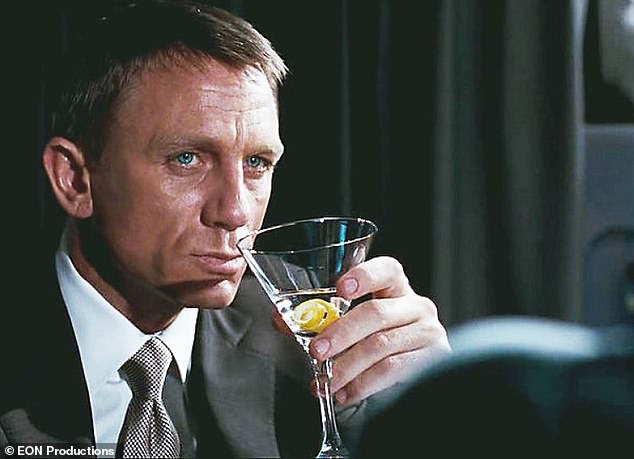 ‘We only live once’: English actor Daniel Craig is pictured here in his first portrayal of the fictional secret agent, in 2006’s ‘Casino Royale’

Bond notoriously enjoys some of the most luxurious meals available to man, but even this aspect of his lavish lifestyle isn’t without risk.

He can be seen eating unwashed fruit despite bacteria thriving on fruit skins, and he repeatedly risks vibriosis, norovirus and hepatitis infection by eating raw oysters, the authors say.

His appreciation of oysters is clearly linked with the belief that they’re an aphrodisiac, but Bond overlooks one of their ‘less-than-arousing side-effects’ – acute diarrhoea.

Bond steals a grape in ‘Thunderball’. Bacteria thrives on fruit skins, but ‘food safety appears to take a backseat to Bond’s appetites’, the authors say

In fact, the researchers appear surprised that Bond never suffered from an ‘inopportune bout of diarrhoea in the midst of world-saving action’ at any time during the 25 films.

Bond’s ‘foolhardy courage’, which sometimes leads to life-threatening situations for him to contend with, may be a consequence of Toxoplasmosis, the infectious disease.

In mice, toxoplasmosis has been linked with a loss of fear of cats – a clever manipulation by the Toxoplasma gondii parasite to increase the probability of transmission by way of ingestion by the feline.

‘Although speculative, toxoplasmosis might explain Bond’s often foolhardy courage in the face of life-threatening danger,’ the authors say.

The team conclude that his employer – MI6 – has the ‘clear responsibility’ to provide Bond with appropriate pre-travel advice to mitigate these risks.

The study has been published in the journal Travel Medicine and Infectious Disease.

A study of the first 24 James Bond films by by Dr Richard Zegers at Utrecht University shows the agent seduces women in 2.3 meetings.

More than 27.8 per cent of Bond’s targets succumb on first acquaintance and, among these, the number of sentences uttered between initial chat-up and bedroom is typically between seven and eight.

Across all 24 films, however, Bond takes a little longer – needing about 37 sentences per seduction.

But there is not a single hint in any film that MI6’s finest agent has ever practised safe sex.

Critics have pointed out that Bond’s latest adventure, ‘No Time To Die’, has 007 failing to charm female colleagues into bed in one scene.

In an interview before the release of the new film, actor Daniel Craig admitted his character had ‘got to adapt’ and that ‘a lot of what went on in the earlier movies is sort of questionable now’.

Climate change could threaten the future of the Winter Olympics

One in four people suffer from 'app fog'

SpaceX rocket warning: The exact time Falcon 9 rocket will crash into the Moon

Mystery of 'finger like features' hidden within solar flares solved