Listen to Ingenuity fly on Mars! NASA releases surprise audio of the hum of the helicopter’s rotors captured by Perseverance rover as it soared 262-feet above the surface during its fourth flight

The world has seen a number of videos showing NASA’s Ingenuity flying above the surface of Mars, but now, for the first time, we can hear the humming of its tiny rotors spinning.

The low hum from blades spinning at more than 2,500 revolutions per minute is barely audible and almost sounds like a low-pitched, far-away mosquito.

The American space agency released the ‘surprising’ audio captured from its Perseverance rover, which was parked 262 feet from the helicopter as it soared through the thin Martian atmosphere during its fourth flight on April 30.

This is the first time a spacecraft on another planet has recorded the sounds of a separate spacecraft.

Along with the first sounds of the copter, NASA also share a video of the flight that saw it ‘fly farther and faster than ever before.’

NASA’s tiny copter is set for its fifth flight Friday, but this mission is different from previous as it will land somewhere outside of the designated ‘Wright Brothers Field.’

Ingenuity is set to retrace the steps of its fourth flight, climbing to 16 feet and heading south 423 feet (129 meters), but instead of turning around and heading back the copter will soar to a new height record of 33 feet (10 meters).

After a total flight time of about 110 seconds, Ingenuity will land, completing its first one-way trip.

NAS released ‘surprising’ audio captured from its Perseverance rover, which was parked 262 feet from the helicopter as it soared through the thin Martian atmosphere during its fourth flight on April 30

Ingenuity traveled in the belly of Perseverance as the pair made the 239 million mile to Mars and for days after they landed February 18.

The four-pound copter has shown it can hold its own after conducting four successful flights on Mars, which landed it a promotion as a scout for Perseverance.

The pair has provided NASA with a number of ‘first’ moments on Mars, with the most recent captured April 30.

It was not clear if the rover’s microphone could pick any sounds of the flight, but that did not stop it from trying.

Thin atmosphere on Mars makes it hard to capture sounds

Sounds on Mars are slightly different than they are on Earth because of the atmospheric composition and its properties.

Mars has a rarefied atmosphere with ‘just about 1% of the density of Earth,’  according to NASA.

NASA says sounds will be lower in volume because of the low pressure on the Red Planet.

Higher-frequency tones will be strongly attenuated by the carbon dioxide molecules.

Although sound is coming from Ingenuity’s spinning rotors, the sounds is muffled by the thin Martian atmosphere.

It is also disrupted by wind gusts when the copter first takes off.

While in the air, the helicopter’s blades spin at 2,537 rpm and faint humming is heard throughout the audio clip.

Ingenuity’s flights are challenging because of conditions vastly different from Earth’s – foremost among them a rarefied atmosphere that has less than one percent the density of our own.

And this hinders the ability to capture clear audio on the Red Planet.

‘We had carried out tests and simulations that told us the microphone would barely pick up the sounds of the helicopter, as the Mars atmosphere damps the sound propagation strongly. We have been lucky to register the helicopter at such a distance.

‘This recording will be a gold mine for our understanding of the Martian atmosphere.’

Scientists made the audio, which is recorded in mono, easier to hear by isolating the 84 hertz helicopter blade sound, reducing the frequencies below 80 hertz and above 90 hertz, and increasing the volume of the remaining signal, NASA shared in a statement.

Some frequencies were clipped to bring out the helicopter’s hum, which is loudest when the helicopter passes through the field of view of the camera.

Soren Madsen, Perseverance payload development manager at NASA’s Jet Propulsion Laboratory in Southern California, said: ‘This is an example of how the different payload instrument suites complement each other, resulting in information synergy. 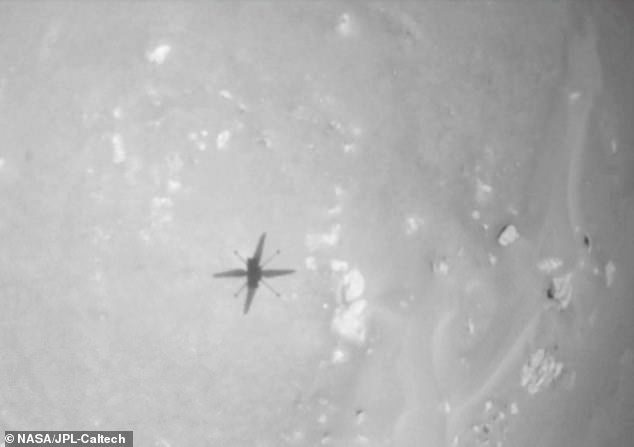 While in the air, the helicopter’s blades spin at 2,537 rpm and faint humming is heard throughout the audio clip 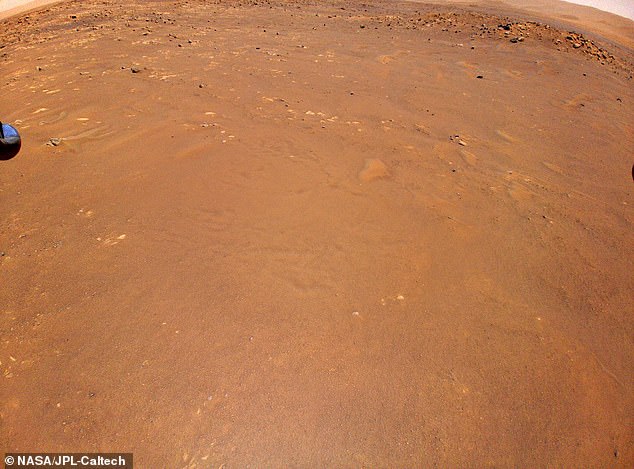 Ingenuity is set to retrace the steps of its fourth flight, climbing to 16 feet and heading south 423 feet (129 meters), but instead of turning around and heading back the copter will soar to a new height record of 33 feet (10 meters). Pictured is an image taken by Ingenuity during its fourth flight

‘JPL built Perseverance as well as Ingenuity and operates both of them.

‘In this particular case, the microphone and video let us observe the helicopter as if we are there, and additional information, such as the Doppler shift, confirms details of the flight path.’

Following this first, Ingenuity will perform another later today when it reaches a new height record and lands in a different spot on Mars.

‘Ingenuity will take off at Wright Brothers Field – the same spot where the helicopter took off and touched back down on all the other flights – but it will land elsewhere, which is another first for our rotorcraft.’

Hum, Ingenuity, listen, of, the, to
You may also like: