Is THIS the key to finding life on Mars? NASA experiment suggests rovers may need to dig up to 6.6ft BENEATH the Martian surface to find ancient microbes

Mars rovers may have to drill down almost seven feet beneath the surface if they are to find evidence of ancient life on the Red Planet, NASA analysis suggests.

Discovering certain amino acids would be a potential sign of extraterrestrials because they are widely used by life on Earth as a component to build proteins.

Proteins are essential to life because they are used to make enzymes, which speed up or regulate chemical reactions and to make structures.

However, new research by the US space agency has revealed that amino acids in the Martian surface are destroyed by cosmic rays much faster than previously thought. 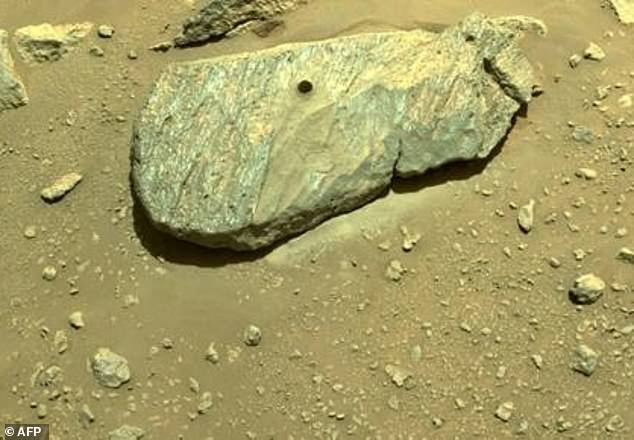 Mars rovers may have to drill down almost seven feet beneath the surface if they are to find evidence of ancient life on the Red Planet, NASA analysis suggests. Pictured is the drill hole from Perseverance’s second sample-collection attempt last year

NASA said the first rocks collected by the Perseverance rover reveal the Jezero Crater was once ‘a potentially habitable sustained environment.’

The core samples have a basaltic composition, which scientists say may have formed from ancient lava flows and could provide a timeline of the ancient lake – from when it formed to when it disappeared.

NASA already knows the crater was once filled with water, but for how long remains a mystery.

The level of alteration that scientists see in the rock suggests groundwater was present for a long time.

The ground team determined there are salts within the rock samples that may have formed when groundwater flowed through and altered the original minerals in the rock.

Or more likely when liquid water evaporated, leaving the salts.

In the next decade samples will be returned to Earth for more detailed analysis in advanced laboratories.

‘At those depths, it would take only 20 million years to destroy amino acids completely.

‘The addition of perchlorates and water increases the rate of amino acid destruction even further.’

Twenty million years is a relatively brief amount of time because scientists are looking for evidence of ancient life on the surface which would have been present billions of years ago when Mars was more like Earth.

Experts say it means that rovers may have to dig about 6.6 feet (two metres) or more under the Martian surface to find signs of ancient life.

This would counter the risk that small molecules such as amino acids could have been degraded by ionizing radiation from space.

‘Missions with shallow drill sampling have to seek recently exposed outcrops — e.g., recent microcraters with ages less than 10 million years or the material ejected from such craters,’ said Pavlov, lead author of the new research.

Cosmic rays are high-energy particles (mostly protons and helium ions) generated by powerful events on the sun and in deep space, such as solar flares and exploding stars.

They can degrade or destroy organic molecules when they penetrate metres into a solid rock, ionizing and destroying everything in their path.

Earth’s thick atmosphere and global magnetic field shields the surface from most cosmic rays, something Mars also had in its youth, but it lost this protection as it aged.

However, there is evidence that billions of years ago, this thicker atmosphere allowed liquid water to persist on the surface of the Red Planet.

Since liquid water is essential for life, scientists want to know if it emerged on Mars by examining rocks for organic molecules such as amino acids.

The team mixed several types of amino acids in silica, hydrated silica, or silica and perchlorate to simulate conditions in Martian soil and sealed the samples in test tubes under vacuum conditions to simulate the thin Martian air.

Some samples were kept at room temperature, about the warmest it ever gets on the surface of Mars, while others were chilled to a more typical -67°F (-55°C).

The samples were blasted with various levels of gamma radiation — a type of highly energetic light — to simulate cosmic-ray doses up to that received from about 80 million years of exposure in the Martian surface rocks. 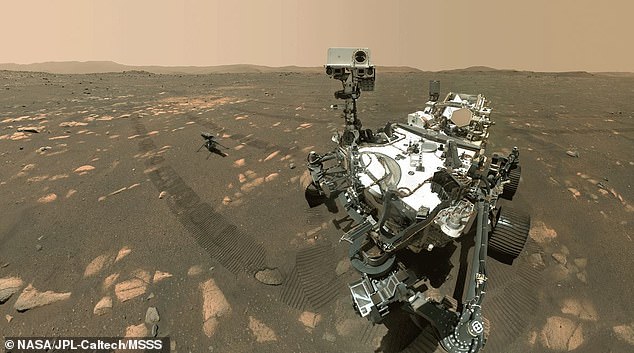 New research by the US space agency has revealed that amino acids in the Martian surface are destroyed by cosmic rays much faster than previously thought. Current Mars rover missions drill down about two inches, depths at which it would take only 20 million years to destroy amino acids completely. Pictured is the Perseverance rover

The experiment is the first to mix amino acids with simulated Martian soil.

Previous experiments tested gamma radiation on pure amino acid samples, but it is highly unlikely to find a large cluster of a single amino acid in a billion-year-old rock.

‘Our work is the first comprehensive study where the destruction (radiolysis) of a broad range of amino acids was studied under a variety of Mars-relevant factors (temperature, water content, perchlorate abundance) and the rates of radiolysis were compared,’ said Pavlov.

‘It turns out that the addition of silicates and particularly silicates with perchlorates greatly increases the destruction rates of amino acids.’

While amino acids have not yet been found on Mars, they have been discovered in meteorites, including one from Mars.

Scientists hope that as well as providing answers about potential ancient life on the Red Planet, Perseverance will also reveal more about Mars’ climate and how it has evolved

‘We did identify several straight-chain amino acids in the Antarctic Martian meteorite RBT 04262 in the Astrobiology Analytical Lab at Goddard that we believe originated on Mars (not contamination from terrestrial biology), although the mechanism of formation of these amino acids in RBT 04262 remains unclear,’ said Danny Glavin, a co-author of the paper at NASA Goddard.

‘Since meteorites from Mars typically get ejected from depths of at least 3.3 feet (one meter) or more, it is possible that the amino acids in RBT 04262 were protected from cosmic radiation.’

Organic matter has been found on Mars by NASA’s Curiosity and Perseverance rovers, but it is not a conclusive sign of life because experts say it could have been created by non-biological chemistry.

The results of this latest experiment also suggest that it is likely that the organic material observed by these rovers has been altered over time by radiation and therefore not as it was when formed.

The new research has been published in the journal Astrobiology.

How important is the presence of liquid water?

It is now widely believed that Mars holds a reasonably large volume of water.

However, the surface of the planet is so cold, this water exists only as ice.

In order for life to exist on a planet, many scientists believe it is essential for the world to possess liquid water.

Ever since technology has enabled mankind to gaze at Mars in detail, humans have been looking for indications that there was water on the red planet.

Did water used to flow on the surface of Mars?

The Mariner 9 mission revealed clues of water erosion in river beds and canyons, as well as evidence of weather fronts and fogs on Mars in 1971.

Later missions from the Viking orbiters, which first launched in 1975, revealed yet more details about how water flowed on the surface and carved valleys.

It was claimed the gullies seen on the surface of the planet had to have been formed by flowing water.

Scientists cited the debris and mud deposits left behind as evidence for moving water existing at some point in the history of the red planet.

However, the formation of these gullies has been hotly debated throughout the ensuing years.

Proof of ice in geological samples from Mars

Spirit and Opportunity, the twin rovers, found evidence of the presence of water enclosed in rock in 2007, when one of Spirit’s wheels broke and gorged a piece of stone.

In 2012, Curiosity (pictured) was meandering over an ancient martian seabed when it examined a number of rocks that were exposed to liquid water billions of years ago

These dark streaks populate the areas of Mars with a sharp incline.

Researchers speculated that these may have been caused by the intermittent flow of liquid water down steep banks on the planet.

In June 2013, Curiosity found powerful evidence that water good enough to drink once flowed on Mars. In September of the same year, the first scoop of soil analysed by Curiosity revealed that fine materials on the surface of the planet contain two per cent water by weight.

In 2015, Nasa claimed to have discovered the first evidence of liquid water on Mars in the present day.

The space agency said that its Mars Reconnaissance Orbiter (MRO) provided the strongest evidence yet that liquid water flows intermittently on present-day Mars.

In 2017, Nasa issued another statement rebuking its initial findings.

Features known as recurring slope lineae (RSL) were first identified in 2011 (pictured). These dark streaks populate the areas of Mars with a sharp incline. Researchers speculated that these may have been caused by the intermittent flow of liquid water

It said the dark features that run down steep inclines on the red planet were actually granular flows, where grains of sand and dust slip downhill to make dark streaks, rather than the ground being darkened by seeping water.

Images from the MRO revealed the streaks only exist on slopes steep enough for dry grains to descend the way they do on faces of active dunes.

Also in 2017, scientists provided the best estimates for water on Mars, claiming it once had more liquid H2O than the Arctic Ocean – and the planet kept these oceans for more than 1.5 billion years.

The findings suggest there was ample time and water for life on Mars to thrive, but over the last 3.7 billion years the red planet has lost 87 per cent of its water – leaving the surface barren and dry.

In a study published in the journal Science, ESO researchers have now discovered the first concrete evidence for liquid water on Mars.