Medieval plague victims were buried individually with ‘considerable care’, new analysis of their teeth has revealed.

Archaeologists have long thought this was the case but could not prove it because plague kills so rapidly that no visible traces are left on the skeleton, meaning victims could only be identified if buried in mass graves.

But for the first time Cambridge researchers have now found Yersinia pestis, the pathogen that causes plague, in DNA from the teeth of people who died between the 14th and 16th centuries. 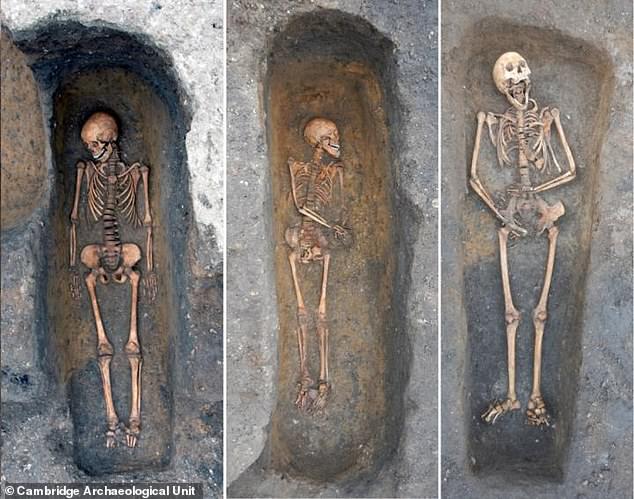 Discovery: Medieval plague victims were buried individually with ‘considerable care’, new analysis of their teeth has found. Pictured are the skeletons of victims in a friary in Cambridge

Bubonic plague is the most common form of plague and is spread by the bite from an infected flea.

The infection spreads to immune glands called lymph nodes, causing them to become swollen and painful and may progress to open sores.

Plague is an infectious disease caused by the bacteria Yersinia pestis, and can be contracted by humans and household animals if proper precautions are not taken.

Human-to-human transmission of bubonic plague is rare and is usually caught from animals.

Symptoms may include sudden onset of high fever, chills, headache, nausea and extreme pain and swelling of lymph nodes, occurring within two to seven days after exposure.

They were individually buried at a parish cemetery and friary in Cambridge, a study by researchers from the After the Plague project found.

The Black Death killed between 40 and 60 per cent of the European population when it hit in the mid-14th century. It had run its course by the early 1350s but reappeared every few generations for centuries afterwards.

Lead author Craig Cessford, of the University of Cambridge said: ‘These individual burials show that even during plague outbreaks individual people were being buried with considerable care and attention.

‘This is shown particularly at the friary where at least three such individuals were buried within the chapter house.’

The study also found that some plague victims in Cambridge did indeed receive mass burials.

Yersinia pestis was identified in several parishioners from St Bene’t’s, who were buried together in a large trench in the churchyard excavated by the Cambridge Archaeological Unit on behalf of Corpus Christi College.

This part of the churchyard was soon afterwards transferred to Corpus Christi College, which was founded by the St Bene’t’s parish guild to commemorate the dead including the victims of the Black Death. 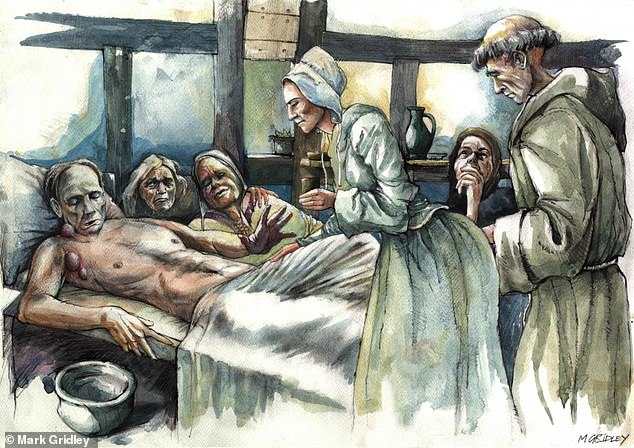 An artist’s impression shows the reconstruction of a plague victim from All Saints, Cambridge

For centuries, members of the college would walk over the mass burial every day on the way to the parish church.

Cessford said: ‘Our work demonstrates that it is now possible to identify individuals who died from plague and received individual burials.

‘This greatly improves our understanding of the plague and shows that even in incredibly traumatic times during past pandemics people tried very hard to bury the deceased with as much care as possible.’

The study is published in the European Journal of Archaeology.

THE CAUSE BEHIND EUROPE’S BUBONIC PLAGUES

The plague, caused by the bacterium Yersinia pestis, was the cause of some of the world’s deadliest pandemics, including the Justinian Plague, the Black Death, and the major epidemics that swept through China in the late 1800s.

The disease continues to affect populations around the world today.

The Black Death of 1348 famously killed half of the people in London within 18 months, with bodies piled five-deep in mass graves.

When the Great Plague of 1665 hit, a fifth of people in London died, with victims shut in their homes and a red cross painted on the door with the words ‘Lord have mercy upon us’.

The pandemic spread from Europe through the 14th and 19th centuries – thought to come from fleas which fed on infected rats before biting humans and passing the bacteria to them.

But modern experts challenge the dominant view that rats caused the incurable disease.

Experts point out that rats were not that common in northern Europe, which was hit equally hard by plague as the rest of Europe, and that the plague spread faster than humans might have been exposed to their fleas.

Most people would have had their own fleas and lice, when the plague arrived in Europe in 1346, because they bathed much less often.