Microsoft is replacing Calibri as its default font after 14 years

Bad news for Calibri fans! Microsoft announces that it is replacing its default font after 14 years – but which one of its five potential replacements do YOU prefer?

If you use Microsoft Office, it’s likely you’re used to seeing your copy appearing in the default Calibri font.

The inoffensive font features subtly rounded stems and corners that are visible at larger sizes, and has been Microsoft’s default since 2007.

Now, the tech giant has announced that it’s replacing Calibri with one of five potential replacements.

The news has stirred up mixed reviews on social media, with many happy to wave goodbye to Calibri, and others shocked at its loss. 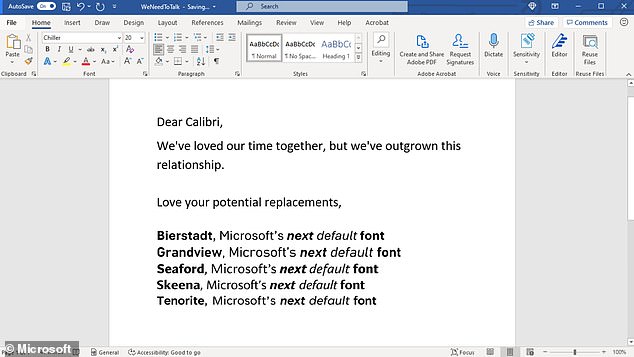 How to change the default font

5. Choose ‘All documents based on the Normal template’, then OK

Microsoft announced the change in a blog this afternoon.

It explained: ‘While default fonts may not have the same flair as some of their more eye-catching cousins (we’re looking at you, Bauhaus 93 and Showcard Gothic), they communicate a distinct personality in their own quiet way – a personality that by extension becomes our personality as well.

‘A default font is often the first impression we make; it’s the visual identity we present to other people via our resumes, documents, or emails.

‘And just as people and the world around us age and grow, so too should our modes of expression.

‘Calibri has been the default font for all things Microsoft since 2007, when it stepped in to replace Times New Roman across Microsoft Office.

‘It has served us all well, but we believe it’s time to evolve.’

Calibri will be replaced with one of five new custom options – Bierstadt, Grandview, Seafor, Skeena or Tenorite.

The five new fonts are now available via the cloud across the Microsoft 365 apps and experiences.

Thankfully for Calibri fans, while the font will no longer be the default, it will still be available in the font menu. 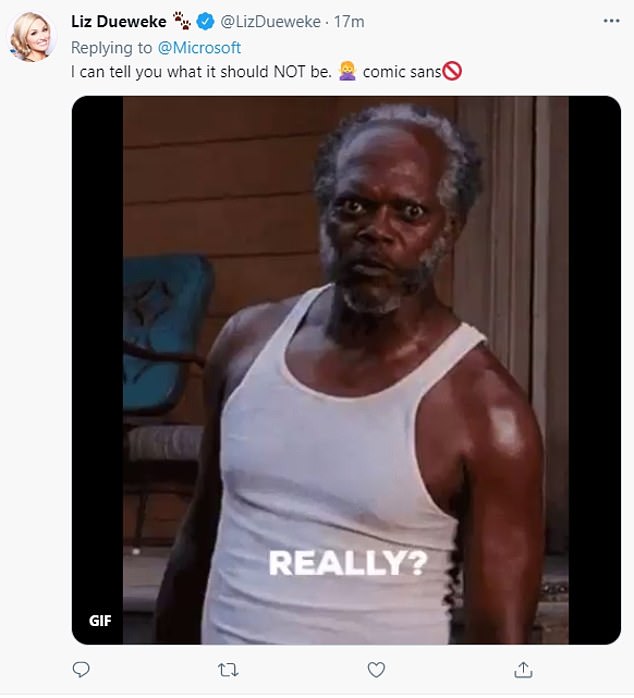 Now, Microsoft is calling on the public to help choose which of the five new fonts should become the default.

It tweeted a screenshot of the new options, writing: ‘We need to talk. What should our next default font be?’

Several eager fans have already replied, with mixed reviews for the new fonts.

One user wrote: ‘Close tie between Tenorite and Bierstadt. Depending on the context, I’d use either.’

Another added: ‘Bierstadt. Clear differentiation between glyphs (eg I and l), letters not too close together, easy to integrate into all sorts of documents.’

And one joked: ‘I can tell you what it should NOT be. Comic sans.’

Microsoft added: ‘Go use the fonts starting today, and show us which you love best with feedback and comments on social.’

What does your favourite font say about you?

Researchers at Cartridgesave.co.uk surveyed 2,468 participants who were asked about the font they use the most within digital documents and discourse.

They then partnered with Psychologist and Wellbeing Consultant Lee Chambers, who analysed the data and revealed the traits most closely associated with each font type.

Lee Chambers explains: ‘Arial users appreciate simplicity and stability and are likely to be reliable even in a crisis.

‘At the same time, they are not likely to let their imagination run loose too often. Because Arial is everywhere, people who use it are likely to feel like they want to fit in and not stand out from the crowd.’

The second most popular font in the UK is Calibri, with an impressive 38% of respondents saying they use this font almost every day.

‘Calibri users value efficiency and trust in the default,’ explains Lee. ‘They are likely to be less bothered by what others think.

‘They may be a little boring, or a bit lazy, or not enjoy expressing themselves as individuals.’

‘With Calibri now being popular, it’s a very safe and universal choice, and it’s users are highly unlikely to take risks in life.’

With 31% of the nation having Times New Roman has their font of choice, expert Lee describes its users as ‘conformist, polite and practical.’

He continues: ‘They will also appreciate the nostalgia and be reflective of the past, and don’t like change or evolution.’

‘However, as Times New Roman has started to disappear, it could suggest that a more straightforward and slower pace of life is preferable for users when compared to an increasingly dynamic and fast-paced society.’

A respectable 25% of the UK have made Georgia their go-to font of choice when it comes to work.

According to Lee, this font type is particularly telling of its users, who are ‘practical and likely to be mature.’

He adds that they tend to value elements of formality and elegance and are also likely to be ‘honest and convey credibility.’

‘As a font, it is undoubtedly aspirational, and this will no doubt shine through in those who use it. And those with an eye for style will value how it gracefully flows when we see it.’