Officials WON'T say how many free test have been collected

Has Britain’s twice-a-week Covid testing blitz been a waste of money? Officials WON’T say how many rapid kits have been collected since launch of scheme a fortnight ago

Boris Johnson launched the near-£3billion scheme at the start of the month, with everyone in England able to get two free lateral flow tests every week regardless of whether they have symptoms.

The kits, previously only routinely used in schools, hospitals and care homes, can either be shipped to people’s homes or picked up in a local pharmacy free of charge.

The scheme – a watered down version of No10’s ambitious ‘Operation Moonshot’ 10million-tests-a-day project – launched on April 9. Matt Hancock said at the time it would be ‘one of our most effective weapons in tackling this virus’.

But data from the Government’s Covid dashboard shows only about 100,000 extra lateral flow kits are being used every day since its introduction, averaging around 800,000.

Officials also won’t say how many are from people picking up the tests themselves —  some of the increase could be down to businesses offering employees tests under the Government-backed scheme.

High street chemist Superdrug told MailOnline just 12,000 kits have been handed out over the last 16 days across 176 of its English pharmacies. That works out at a rate of 4.2 kits — which include seven tests —  being collected per pharmacy each day.

Around 10,000 pharmacies are signed up to the scheme in England in total.

Boots said uptake of the tests at its stores had been substantial, but admitted there are still ‘plenty available for asymptomatic customers’.

Meanwhile, Labour’s shadow health minister Justin Madders said the Government must do ‘all they can to publicise this scheme’ in the face of low uptake. 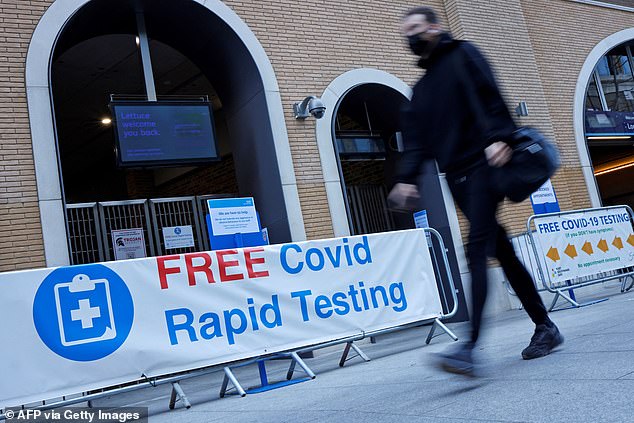 Dr Raffle said: ‘It is misleading to tell everyone this is wonderful and this is going to mean lockdown can be eased.

‘Nobody with any experience in public health outbreak control or pandemic responses has ever said ‘let’s test lots of low risk people with an approach that’s never been evaluated’.’

Dr Raffle, a staunch critic of lateral flow kits, and others have pointed out that the devices can be highly inaccurate and often give people the wrong result.

This can lead to needless self-isolating, or, worse, infected people taking risks because they have falsely tested negative.

She added: ‘If you’ve been following the rules and social distancing why would you take an [inaccurate] test twice weekly?’

And Christopher Snowdon, head of lifestyle economics at the Institute of Economic Affairs think-tank, said he was not surprised so few people appeared to be using the rapid kits.

He told MailOnline: ‘I wouldn’t expect to see massive uptake voluntarily. I don’t see why someone who doesn’t have symptoms and doesn’t have any signs [of illness] would take one.’

Mr Snowdon added that even though uptake appeared to be low among the general public, he does not ‘see them gathering dust for too long’. 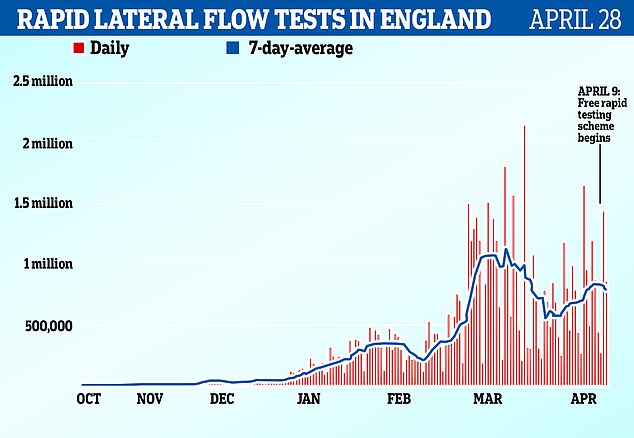 data from the Government’s Covid dashboard shows show only 100,000 extra lateral flow kits are being used every day since the introduction of the scheme, a watered down version of No10’s ambitious ‘Operation Moonshot’

The biweekly testing scheme has also been mired in controversy due to concerns about the accuracy of the lateral flow devices.

No10 has put kits made by Californian-firm Innova – owned by Chine-American businessman Charles Huang, who was born in the pandemic’s epicentre Wuhan – at the heart of the programme.

Ministers spent £2.8billion on hundreds of millions of the kits, which give a result in 30 minutes. They have been shown to miss infectious people up to 40 per cent of the time.

Britain’s medical watchdog the MHRA has accused ministers of ‘stretching the rules’ around the approval of Innova’s tests.

It initially approved them to be used in schools and hospitals to find cases, not green light people enjoying more freedoms. Regulators believe ministers are blurring the line between the two.

The Medicines and Healthcare products Regulatory Agency (MHRA) warned the way they are currently being used risks infected people assuming they are clear and safe to mingle with others.

Regulators approved the controversial kits – which give a result in under half an hour – to be used as a way to find Covid cases, helping to keep schools and workplaces Covid-free after lockdown.

But due to fears about the accuracy of the tests, the MHRA stressed they were not to be seen as a ‘green light’ for those who test negative to enjoy greater freedoms.

The MHRA has expressed concern that the Government’s universal testing programme may blur the line between the two. It warned the twice-weekly testing regime unveiled earlier this month was ‘a stretch’ of the rules for how the tests should be used.

Boris Johnson today doubled-down on the tests, however, saying they ‘offer great prospects’ for the UK and are ‘very useful’ n helping to isolate cases.

The Government has been criticised for rolling the lateral flow devices out for people to do themselves, despite manufacturers admitting they are built for professional use and on people with symptoms.

Numerous studies have shown the kits are far less accurate when self-administered and leaked Department of Health emails earlier this month revealed senior officials fear they only pick up on 10 per cent of infections when done this way.

No10 has spent more than £2billion so far on the tests, which were initially used to in schools and offices but are now available to everyone.

The MHRA has raised the concerns with Matt Hancock’s Department of Health, asking officials to produce more accurate data about how reliable they are when they are self-administers, which is the primary way they are being deployed across the country under the new two-test scheme.

Figures show the average number of rapid lateral flow devices being used overall in England has increased since since the scheme launched on April 9, rising from 662,674 to 794,319 by April 23.

But schools — where rapid tests have been in use since children returned to classrooms in March— reopened after the Easter break during the same period, so it is not possible to tell how much of this increase has come as a result of the scheme.

And the number of rapid tests being deployed each day is still far lower than its peak on March 21, when the seven-day average reached more than 1million.

Likewise, when the free rapid testing scheme includes free tests for businesses, so it is not possible to determine how much an increase in testing is actually coming from people picking up tests for themselves and family members at pharmacies or in the post.

Labour’s shadow health minister Justin Madders said: ‘Regular testing is a vital tool in our fight against Covid as the country begins to open up further.

‘It’s vital that Ministers do all they can to publicise this scheme and make it as accessible as possible.’

Meanwhile pharmacies supplying the tests say there are still ‘plenty’ of tests available in stock.

A Boots spokesperson said: ‘Since we began the free NHS Lateral Flow Device distribution service in over 1,500 Boots stores, we’re pleased to say that there has been a substantial uptake from the public.

‘We still have plenty available for asymptomatic customers to pick up in selected stores, as and when they need them.’

Superdrug said: ‘Our customers have been very positive at being able to easily access the free rapid testing scheme at 176 of our pharmacies located in England.

‘They have been available at these pharmacies since April 12, 2021, and over 12,000 test kits have been handed out over the last three weeks.

‘There’s good availability of the rapid test kits in all of our English pharmacies.’

The Department of Health and Social Care said the scheme was launched in line with clinical guidance and the department is working to provide ‘the most useful statistics’ around rapid test uptake.

A spokesperson said: ‘With around one in three people not showing symptoms of Covid, regular, rapid testing is an essential tool to control the spread of the virus as restrictions ease by picking up cases that would not otherwise have been detected.

‘Everyone in England can now access rapid testing twice a week, in line with clinical guidance.

‘NHS Test and Trace provides a range of statistics and we are working with the country’s official statisticians to provide the most useful statistics around take up of LFDs.’

The lateral flow kits available on the new scheme are free of charge and dished out at approved testing sites, more than 5,000 pharmacies and by post. People can collect tests for up to four household members at a time.

Boots told MailOnline people can turn up to the pharmacy on the day and do not need to pre-book their tests in advance.

In an effort to kick-start the huge testing blitz, a major public information campaign featuring NHS staff has been launched across TV, radio and social media.

Mr Hancock said at the time: ‘Around one in three people have coronavirus without any symptoms, so getting tested regularly is one of the simplest and easiest ways we can keep ourselves and our loved ones safe.

‘I’d encourage everyone to take up the offer and test twice a week.

‘Alongside the successful rollout of the vaccination programme, rapid testing will be one of our most effective weapons in tackling this virus and ensuring we can cautiously reopen our economy and parts of society that we have all missed.

‘The British people have made a tremendous effort throughout the pandemic and I am confident they will do the same now by taking up this offer of free, rapid tests.’

WHAT IS THE MASS TESTING PROGRAMME AND HOW DOES IT WORK?

What is the scheme?

Ministers want everyone in England to take a Covid test twice a week to help quickly identify any surge in cases as the economy and society are unlocked in the coming months.

How does it work?

People will be able to order so-called lateral flow tests for use at home, or get tested at work or at sites run by local councils. They are already used by millions of children following the return to school last month.

What are lateral flow tests?

These pregnancy-style tests can deliver results at home within half an hour. Like a regular test they involve taking a swab from the back of the throat and nose but the samples do not have to be sent for laboratory analysis.

Are these tests reliable?

They are not as sensitive as a standard PCR laboratory test. One study found they missed 40 per cent of asymptomatic cases. However, they perform much better at picking up cases where people have a high viral load. The Government says they have picked up 120,000 cases which would not otherwise have been identified.

What if I test positive?

People who test positive will be asked to self-isolate in the normal way, as well as providing details of their contacts to the Test and Trace service.

What about false positives?

Recent analysis by NHS Test and Trace suggests fewer than one in a thousand lateral flow tests will produce a false positive. However, anyone who does test positive will be offered a PCR test to confirm the result.

How much will this cost?

Officials were tight-lipped about the likely cost, but acknowledge it will run into billions of pounds. Lateral flow tests are much cheaper than the standard PCR ones, with some reports suggesting the Government can buy them for as little as £5 each. But if 25 million people were to test twice a week, the cost would still top £1 billion a month.

What will it cost me?

Nothing. The Government will pick up the bill for all tests.

How, M, officials, say, Won't
You may also like: