NASA has successfully grown and harvested green peppers on the ISS

NASA announced late Friday that it has successfully grown the first chile peppers in space, with astronauts on the International Space Station turning the fruit into tacos.

The U.S. space agency said the chile peppers were grown for the Plant Habitat-04 investigation.

‘The investigation involved microbial analysis to improve understanding of plant-microbe interactions in space and the crew’s assessment of flavor, texture, and nutrition of the first peppers grown in space,’ NASA said in a statement.

The peppers, which have been growing on the ISS since July, were from the ‘Española Improved’ chile, grown in the famed Hatch Valley of New Mexico. 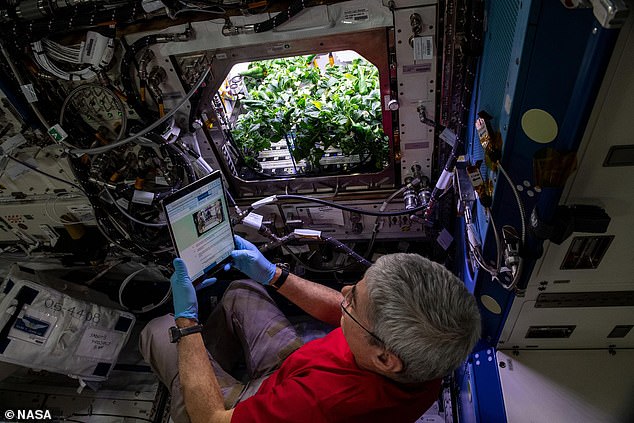 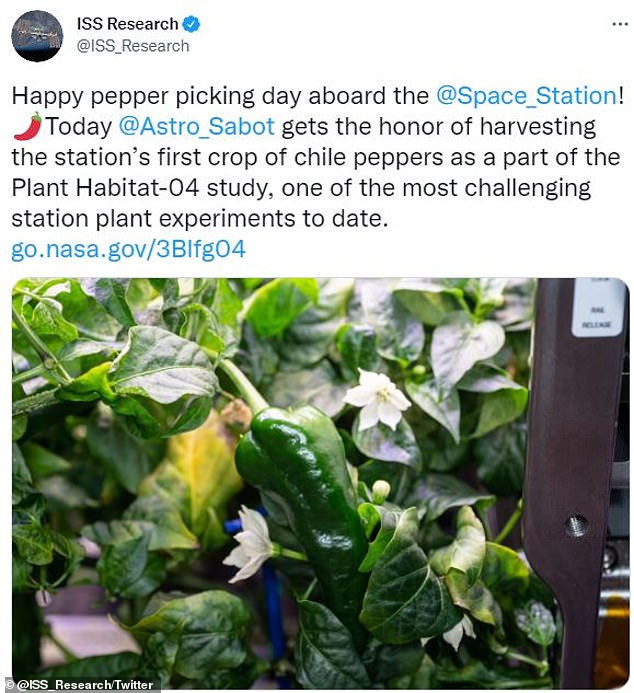 It is a cross between the southern New Mexico ‘sandia’ chile and a landrace chile, found in the northern part of the state.

Most Hatch chiles are eaten when they are green, but the ‘Espanola Improved’ is one of the few that is ‘regularly consumed in both the green and red stages of the pepper’s development,’ NASA said previously.

Peppers are ‘more difficult to cultivate than many possible space crops because they take longer to germinate, grow, and develop fruit,’ NASA has said previously. 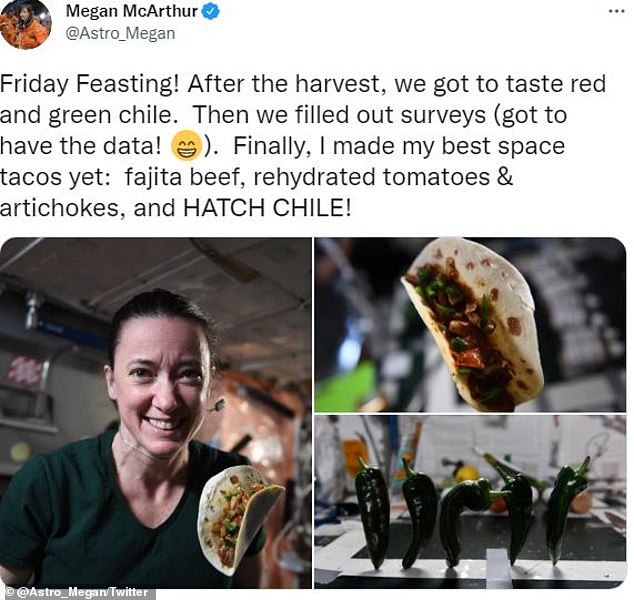 NASA astronaut Megan McArthur, who has been on the ISS since April, tweeted that after picking the chile peppers, both data and dinner were served

NASA astronaut Megan McArthur, who has been on the ISS since April, tweeted that after picking the chile peppers, both data and dinner were served.

‘After the harvest, we got to taste red and green chile,’ McArthur tweeted.

‘Then we filled out surveys (got to have the data! Grinning face with smiling eyes).

‘Finally, I made my best space tacos yet: fajita beef, rehydrated tomatoes & artichokes, and HATCH CHILE!’

NASA has already cultivated Chinese cabbage, three types of lettuce, red Russian kale and zinnia flowers up in orbit around the Earth.

Certain chile peppers have advantages when it comes to looking for plants that can be grown easily in space, in that they can be easily pollinated and can survive within a carbon dioxide rich environment.

In 2019, NASA announced that the Española chile pepper would be the first fruit grown on the ISS in an effort to look for crops that astronauts could take to Mars.

Originally, NASA had been considering growing Hatch peppers on the International Space Station instead.

Unlike Hatch peppers, which grow in the desert, Española chile peppers typically grow at higher altitudes and have a shorter growth period, which makes them much more suitable for being harvested in space.

An, grown, has, Nasa, successfully
You may also like: