Flirting with disaster! Unlike everyday stressors, natural disasters like hurricanes bring married couples closer together – but only for about a year, study shows

Natural disasters can actually bring couples closer together, at least in the short run, according to a unique new study.

Researchers at the University of Texas at Austin interviewed hundreds of newlywed couples before and after Hurricane Harvey slammed into the Texas coast in August 2017.

‘We actually saw the biggest jumps in relationship satisfaction among the couples who were the most unhappy before the hurricane,’ lead author Hannah Williamson, a professor of human development at UT at Austin, said in a statement.

That proved true regardless of how much the hurricane personally impacted the couple in damage to their homes, financial losses and more.

The boost was not permanent, though: Williamson said couples returned to pre-hurricane levels of satisfaction within a year. 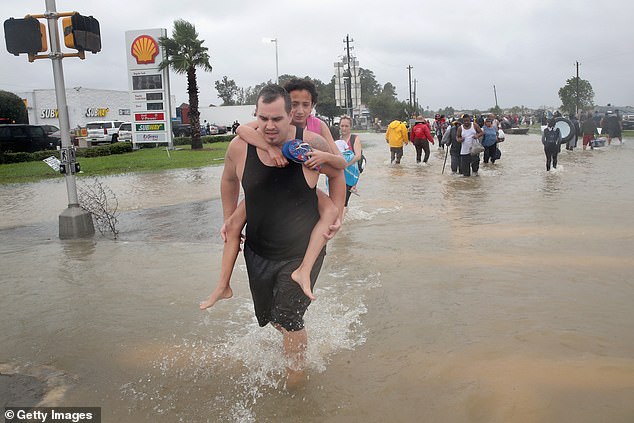 People make their way out of a flooded Houston neighborhood hit by Hurricane Harvey in 2017. Researchers doing analysis of relationship satisfaction when Harvey hit were able to go back and re-interview couples to see how it affected their dynamic

The team had already surveyed hundreds of newlywed couples about their relationship satisfaction levels when Harvey hit.

Previous research into the effects of a disaster on a relationship had lacked such objective before-and-after data, but Williamson was able to go back after Harvey and re-interview the 231 couples.

‘We originally set out to study the effects of everyday stressors, such as financial problems and the transition to parenthood, on couples in the early years of their marriage,’

‘When the hurricane hit in the middle of the study, it allowed us to look at the effects of a major acute stressor,’ Williamson added.

Based on previous studies, Williamson said she expected people who were happy in their relationship before the hurricane would be even happier afterward, and those who were dissatisfied would be even more so.

Williamson said to her knowledge a relationship study with data from before and after a natural disaster had not been done before. 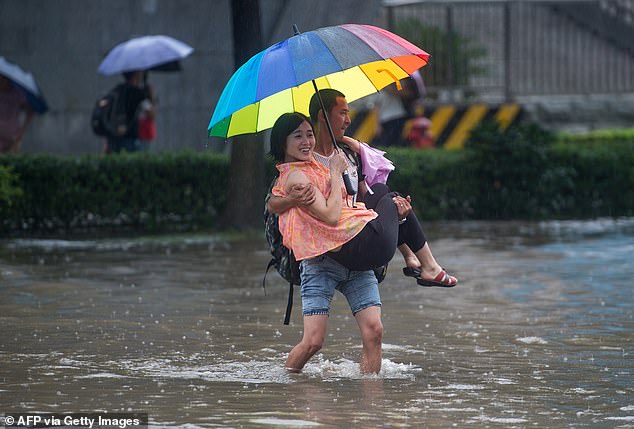 Couples who are unhappy in their relationship receive a temporary boost after surviving a natural disaster, according to new research from the University of Texas at Austin. Pictured: A couple crosses a flooded street in Wuhan, China, in 2016.

‘A natural disaster can really put things in perspective,’ she said.

‘People realize how important their partner is to them when they are jolted out of the day-to-day stress of life.’

Other studies found everyday stressors like money, children and adapting to married life typically exacerbated dissatisfaction in a relationship, leading to a ‘stress spillover,’ the researchers said.

Rather than encouraging couples to move to a fault line or flood zone, though, Williamson suggested, ‘There may be therapeutic applications to this if couples can shift their perspective in a similar way without having to go through a natural disaster.’

With climate change increasing in intensity, Williamson said, ‘more and more people are going through disasters such as hurricanes and wildfires.’

The study was published this week in the journal Psychological Science. 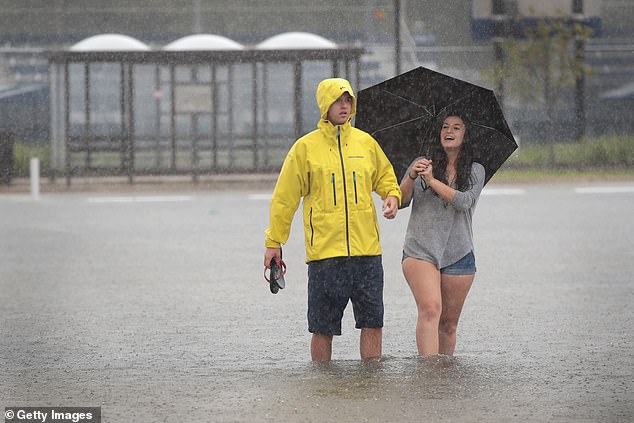 The relationship boost was not indefinite—couples returned to pre-hurricane status within a year. Pictured: Students make their way across a flooded parking lot at Rice University after Hurricane Harvey on August 27, 2017

Hurricane Harvey left 80 people dead and 800,000 either homeless or in need of help, and caused over $133 billion in damage to Houston and the surrounding areas.

While man-made climate change didn’t trigger Harvey, the research indicated a warmer, wetter world tripled the likelihood that a hurricane would hit Houston and factored into the storm’s record rainfall.

Harvey was the second most expensive natural disaster in U.S. history, following Hurricane Katrina, which did more than $160 billion in damage, CNN reported.

Weather-related disasters such as Hurricane Harvey are striking four to five times more often than they did 50 years ago, according a report from to the UN’s World Meteorological Organization (WMO).

Destructive events including storms, flooding and drought are causing seven times more damage than in the 1970s, the WMO said, but they’re killing far fewer people.

The report was released ahead of the 2021 United Nations Climate Change Conference, also known as COP26,  being held in Glasgow through November 12.