Can YOU tell where the rocket smashed into the Moon? Double crater left by a mysterious rocket booster that crash-landed in March is spotted by NASA’s lunar orbiter

NASA has revealed images of a massive crater that was left by a ‘mystery rocket’ that smashed into the moon in March.

Newly-released photos were taken by the Lunar Reconnaissance Orbiter (LRO), NASA’s robotic spacecraft currently orbiting the moon, on May 25.

They show a surprising ‘double crater’ roughly 92 feet (28 metres) wide near Hertzsprung crater on the moon’s far side.

A US researcher discovered the rocket body hurtling towards the moon in January before it smashed into the moon on March 4, but its identity is still unknown.

It’s said to be a spent rocket booster from a launch that happened years ago, but neither China nor the US will claim responsibly for it. 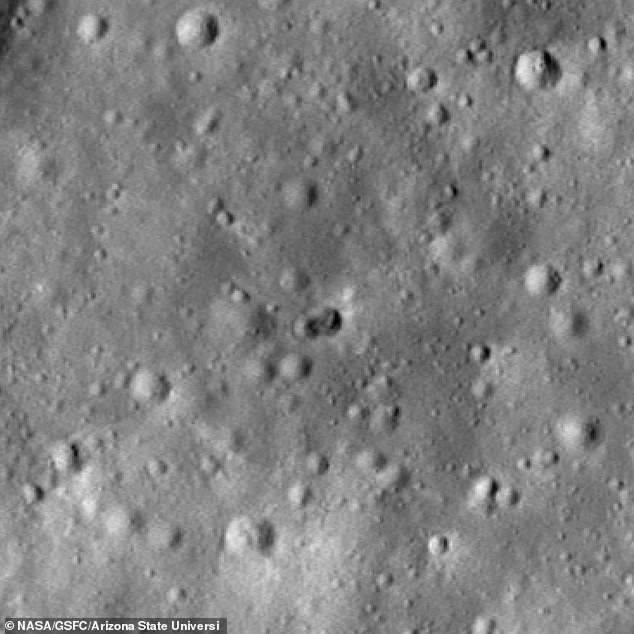 Can you see where the rocket smashed into the moon? The impact crater was created by a mysterious rocket booster in March is spotted by NASA’s Lunar Reconnaissance Orbiter

In January, US researcher Bill Gray discovered that a mystery rocket was on a crash course to the moon.

Initially, Grey thought it was the booster from a SpaceX rocket launch in February 2015.

However, NASA said the object was likely the booster rocket from China’s Chang’e 5-T1 mission launched in October 2014. China denied this.

The rocket impacted the moon on March 4, 2022 near Hertzsprung crater, creating a double crater roughly 92 feet (28 metres) wide in the longest dimension.

Mark Robinson, a professor of earth and space exploration at Arizona State University, said the item weighed about four tons and was travelling at 5,700 miles per hour prior to impact.

Mark Robinson, a professor of Earth and space exploration at Arizona State University, said the item weighed about four tons and was travelling at 5,700 miles per hour prior to impact.

Images of the resulting crater, take by the Lunar Reconnaissance Orbiter Camera (LROC), a system of three cameras mounted on the LRO, were shared by NASA.

‘The identity of the rocket body remains unclear,’ NASA said.

‘The double crater was unexpected and may indicate that the rocket body had large masses at each end.’

Since the origin of the rocket body remains uncertain, the double nature of the crater may help to indicate its identity, the space agency said.

NASA said no other rocket impacts on the moon in history have caused a double crater, although there are bigger human-caused impact craters on the moon.

Impact craters made during four of the Apollo missions in the 1970s were substantially larger (greater than 115 feet) than each of the double craters.

It was back in January that the ‘mystery rocket’ was initially identified by Bill Gray, an independent researcher and developer of the astronomical software Project Pluto.

In a new blog post, Gray said he’s a ‘little puzzled’ by the double nature of the impact crater.

‘I am in no way an expert on what happens in high-speed impacts like this, except to know that they can have some very strange, non-intuitive results,’ he said.

Back in January prior to impact, Gray thought the object was the booster from a SpaceX rocket launch in February 2015, which sent a weather and Earth observation satellite named DSCOVR into orbit for NASA.

However, NASA said its analysis showed that the object was likely the booster rocket from China’s Chang’e 5-T1 mission launched in October 2014 from Xichang Satellite Launch Center, Xichang, China.

This was denied by a Chinese foreign ministry spokesman, who said China’s aerospace endeavours are ‘always in keeping with international law’. 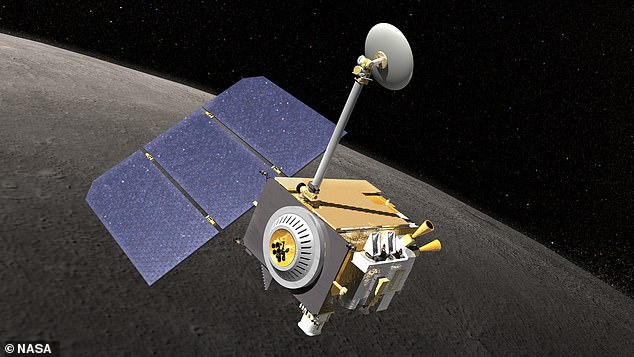 The images taken by the LRO (pictured) were snapped in mid-August, but were only released recently

The objective of the mission was to test the ability of the spacecraft’s capsule to re-enter Earth’s atmosphere.

The capsule landed back on Earth that same month, but it’s been thought by the US authorities that the booster rocket had been floating through space for more than seven years before heading towards the moon.

Regardless of its identity, the collision course has re-ignited discussion about space debris and who is legally responsible for tracking space junk floating outside the Earth’s atmosphere.

According to NASA, there are about 23,000 pieces of debris larger than a softball orbiting the Earth.

In 2021, an expert at the European Commission warned that unwanted debris left by humans in low-Earth orbit have become the equivalent of a ‘new drifting island of plastic’.

The near-miss between Tsinghua and the piece of debris, called 49863, occurred at 02:49 GMT on January 18, the China National Space Administration (CNSA) said, based on tracking data.

The two objects passed each other at a relative speed of more than 11,700 miles per hour, according to CNSA.

Russia’s debris came from its 4,410-pound Cosmos 1408 satellite, which the country obliterated in November during its ‘anti-satellite missile test’.

Cosmos 1408 launched in 1982 and was deliberately destroyed by the Russians because it was no longer operational.

Deciphering an infant's cry is NOT an innate ability, study reveals