Follow
Home » Science » Neanderthals and humans coexisted for up to 2,900 years in Europe

Neanderthals and humans coexisted for up to 2,900 years in Europe

Neanderthals and humans coexisted for up to 2,900 years in France and Spain: First study to determine how long and where the two mingled finds they overlapped 40,000 years ago

Humans and Neanderthals may have coexisted in Europe for up to 2,900 years, giving them time to learn from and breed with each other, a new study finds.

Using artifacts – tools and bones- from both groups found at sites in France and Spain, archaeologists determined humans were present about 42,500 years ago and the subspecies of archaic humans showed up about 40,000 years ago before disappearing some 1,000 years after.

This means the two species lived alongside each other in the region for 1,400 to 2,900 years, marking the first evidence showing how long and where the pair mingled before subspecies of archaic humans went extinct.

The research, however, does not provide evidence to the longstanding question of if humans played a role in the extinction of Neanderthals. 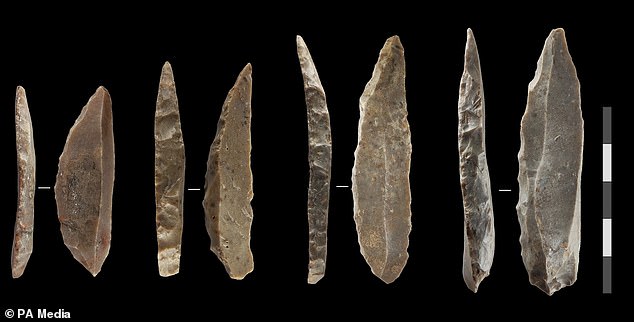 The study is the  first to find evidence of how long and where the pair mingled before subspecies of archaic humans went extinct. This was determined using artifacts from both groups found in Europe. Pictured are Neanderthal stone tools

Igor Djakovic, a PhD student at Leiden University in the Netherlands and lead author of the new study, said we know that humans and Neanderthals ‘met and integrated in Europe, but we have no idea in which specific regions this actually happened’.

Djakovic and his team excavated up to 10 archaeological sites spanning across northern Spain and south-west, central and Mediterranean France, according to the study published in Scientific Reports.

During the research, the group uncovered 66 Neanderthal and modern human artifacts and remains of 10 Neanderthals, whose ages at death were calibrated.

All dating was performed with computer modeling using optimal linear estimation that is based on Bayes’ theorem. 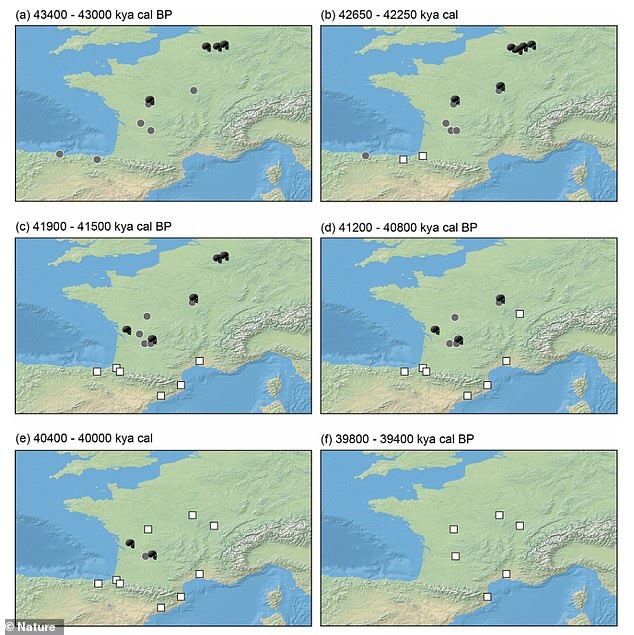 Humans were present about 42,500 years ago and Neanderthals showed up about 40,000 years ago before disappearing about 1,000 years after This means the two groups coexisted 1,400 to 2,900 years in France and Spain

Using this, researchers were able to estimate when the artifacts appeared to determine the earliest and latest dates of when either group settled at the site.

During this time there are indications of a great ‘diffusion of ideas’ by both humans and Neanderthals, Djakovic said.

The period is ‘associated with substantial transformations in the way that people are producing material culture,’ such as tools and ornaments, he said.

There was also a ‘quite severe’ change in the artefacts produced by Neanderthals, which started to look much more like those made by humans, Djakovic added.

Given the changes in culture and the evidence in our own genes, the new timeline could further bolster a leading theory for the end of the Neanderthals: mating with humans.

Breeding with the larger human population could have meant that, over time, Neanderthals were ‘effectively swallowed into our gene pool,’ Djakovic said.

‘When you combine that with what we know now – that most people living on Earth have Neanderthal DNA – you could make the argument that they never really went extinct, in a certain sense.’