One in four people suffer from 'app fog'

Do YOU suffer from ‘app fog’? One in four people struggle to keep up with friends because they are using too many apps, study warns

Whether it’s Instagram or Candy Crush, most of us have a range of apps installed our smartphones that we often get lost in.

Now, new research has revealed the extent to which many people are obsessed with their apps.

A YouGov survey found that one in four people struggle to keep up with friends because they are using too many apps.

The phenomenon known as ‘app fog’ is caused by confusion when multiple apps are used to message friends.

Smartphone users forget who uses which app – and in turn are unable to stay on top of conversations. 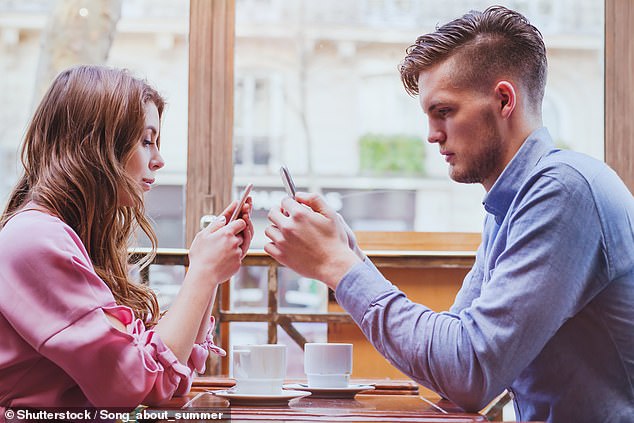 Are you guilty of ‘phubbing’?

The word ‘phubbing’ is a portmanteau of the words phone and snubbing.

To phub someone is to ignore them and focus on something on your phone such as texting or social media instead, despite being in their presence.

The term was first coined in 2012 as part of a campaign to stop the practice completely.

A YouGov poll found one in three people said they had missed a night out or an important event with friends as a result.

While one in ten said it had caused them to lose touch with a friend or have their relationship negatively impacted.

Nearly half – 47 per cent – said they would rather use just messaging app if they could.

The survey of 1,966 smartphone users found that of those who used two apps, 23 per cent experienced app fog.

This increased however to 38 per cent when three apps were used and 43 per cent for those who used five or more.

Amandine Le Pape, co-founder of Element, the secure messaging app that carried out the research said: ‘Having five or six different messaging apps adds stress to our busy lives.

‘There are too many pings going off all the time for people to manage.

‘It’s frustrating to check multiple apps and jump between them to message different friends.’

Some 57 per cent of 18-34-year-olds have forgotten to respond to a friend, which significantly decreases for those aged above 55.

It caused nearly one in five of the young people to lose touch with a friend, compared to only 5 per cent of those in the older age group.

METHODS FOR PARENTS TO KEEP THEIR CHILDREN SAFE ONLINE

Children as young as two are using social media, research from charity Barnardo’s has suggested.

Internet companies are being pushed to do more to combat harmful content online but parents can also take steps to alter how their children use the web.

Here are some suggestions of how parents can help their children.

Both iOS and Google offer features that enable parents to filter content and set time limits on apps.

For iOS devices, such as an iPhone or iPad, you can make use of the Screen Time feature to block certain apps, content types or functions.

On iOS 12, this can be done by going to settings and selecting Screen Time.

For Android, you can install the Family Link app from the Google Play Store.

Talk to your children

Many charities, including the NSPCC, say talking to children about their online activity is vital to keep them safe.

Its website features a number of tips on how to start a conversation with children about using social media and the wider internet, including having parents visit sites with their children to learn about them together and discussing how to stay safe online and act responsibly.

There are tools available for parents to learn more about how social media platforms operate.

Net Aware, a website run in partnership by the NSPCC and O2, offers information about social media sites, including age requirement guidance.

The guidelines, published in April, suggest children aged between two and five are restricted to an hour of daily sedentary screen time.