Follow
Home » Science » People in India are being cremated in parking lots, with so much demand that families have to take tickets and wait

People in India are being cremated in parking lots, with so much demand that families have to take tickets and wait

Victims of India’s devastating COVID-19 surge are being cremated in parking lots, with one crematorium so overwhelmed that it has launched a ticketing system.

In the past fortnight, the number of new daily COVID-19 cases in India has broken global records, with the country recording thousands of new deaths every day.

Staff at the Seemapuri crematorium in New Delhi recently erected several extra burning platforms in their parking lot to keep up with the staggering demand, CNN reported.

Cremation is the standard death rite in Hinduism, India’s dominant religion, and crematoriums are under intense pressure.

“Before the pandemic, we used to cremate eight to 10 people [a day],” Jitender Singh Shunty, the head of the Seemapuri crematorium, told CNN. “Now, we are cremating 100 to 120 a day.”

The crematorium is so busy that families arriving with their dead relatives are now being made to take a ticket and join a queue to wait their turn, CNN reported.

In the city of Gurgaon, in the northern Haryana state, staff at the Madanpuri crematorium also transformed a parking lot into a temporary cremation site on Monday, The Times of India reported.

“We have space to cremate only 30 bodies at any given time,” a caretaker at the crematorium told the newspaper. “We have been forced to set up 10 platforms in the parking area.”

At a large crematorium in the western Gujarat state, several metal parts reportedly began to to melt because they had been running for so long.

In an attempt to help overflowing crematoriums, authorities in New Delhi are also building makeshift cremation sites in the city’s public parks.

The Sarai Kale Khan crematorium has set up 20 new funeral pyres, The Hindu reported, adding as many as 50 were being erected in local parks. 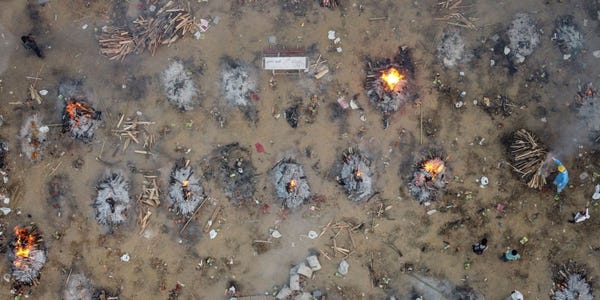 Some 3,500 people died from COVID-19 on Thursday alone, according to The Times of India, with nearly 400 of those in New Delhi, a record for the city. Some 370,000 people tested positive for COVID-19 that day, the newspaper reported.

India’s new surge has been attributed to a premature easing of restrictions and rapidly spreading new variants, according to experts, who said a slow vaccine rollout and an underprepared healthcare system are making matters worse.

The government has been accused of trying to cover up the true extent of the outbreak, as CNN reported, but the head of the ruling party said Friday that it would take full responsibility.