Americans knew little about how their actions were fueling the coronavirus’ spread a year ago: People met friends at bars and concerts, blew their noses in public, and gathered en masse for campaign rallies, Mardi Gras celebrations, and college basketball games.

Research now shows the virus was likely spreading in the US as early as December 2019. But even after the US identified its first coronavirus case in January 2020, life continued somewhat normally through mid-March.

The Centers for Disease Control and Prevention didn’t recommend against gatherings of 50 or more people until March 15. Had the US instituted broad social-distancing measures one week earlier, a study found, roughly 600,000 infections and 32,000 deaths could have been prevented by May 3.

The following photos, taken roughly a year ago, show how little Americans understood about what was ahead.

More than 1 million people gathered in New Orleans for Mardi Gras from February 14 to February 25, 2020. 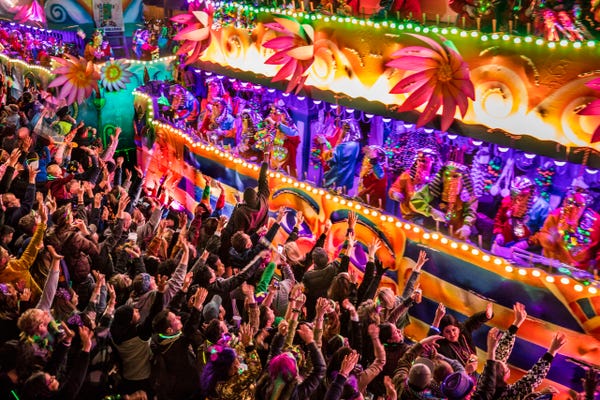 A study found that Mardi Gras “greatly accelerated” the coronavirus outbreak in New Orleans, Louisiana — and likely introduced the virus to other nearby states.

Though the research is still awaiting peer review, the authors wrote that most of the roughly 50,000 COVID-19 cases reported during Louisiana’s first wave can likely be traced back to Mardi Gras.

One day after New York City confirmed its first coronavirus case, officials crammed into a conference room to discuss their emergency-response plan. 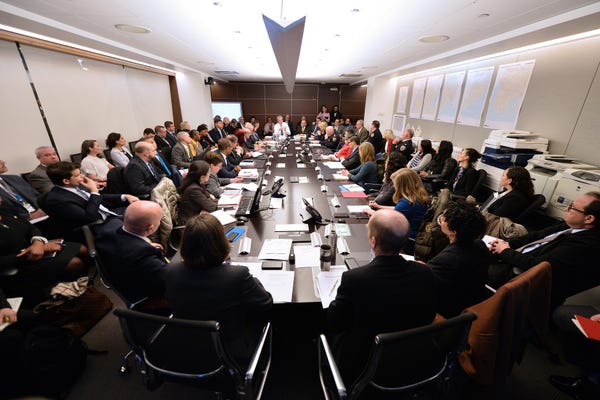 Ohio ordered bars to close on March 15, one of the first states to do so. 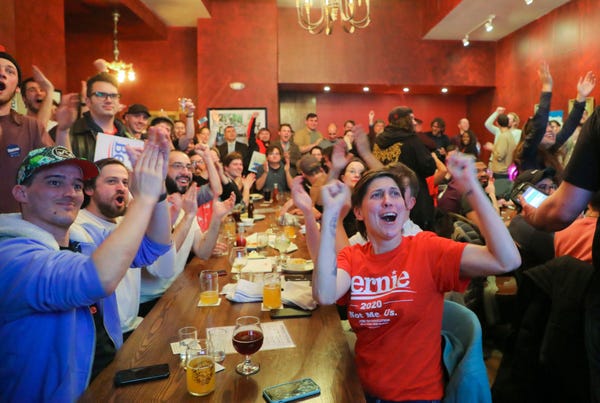 That same day, Dr. Anthony Fauci, director of the National Institute of Allergy and Infectious Diseases, called for a “dramatic” decline in personal interactions in bars and restaurants.

“Everybody has to take this seriously, even the young,” Fauci told CNN.

A September CDC report found that adults with COVID-19 were twice as likely to have reported dining a restaurant in the two weeks before they got sick than those who tested negative.

President Donald Trump toured the CDC in person on March 6. "It came out of nowhere," he said of the coronavirus at a a press conference that day. "We're taking care of it." 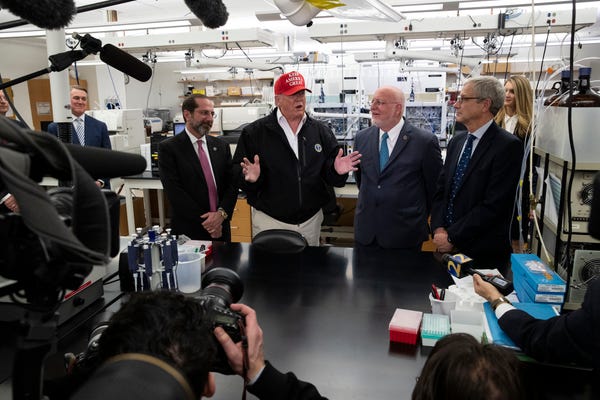 Trump also falsely claimed on March 6 that anyone who wanted a coronavirus test could get one. But the US was only testing 20 out of every 1 million people at that point.

Thousands of people gathered in Kansas City, Missouri, at a campaign rally for Joe Biden on March 7. 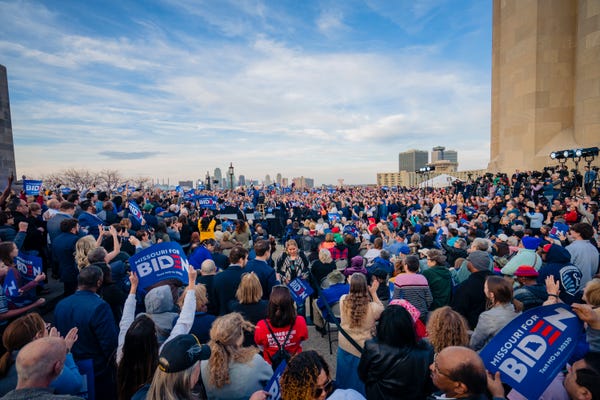 “We knew that this was coming, back as far as January,” Biden told CNN on March 1.

He began canceling his rallies around March 10, shortly after the CDC advised older Americans to “stay home as much as possible” and avoid crowds.

The CDC didn't recommend wearing masks in public until April. 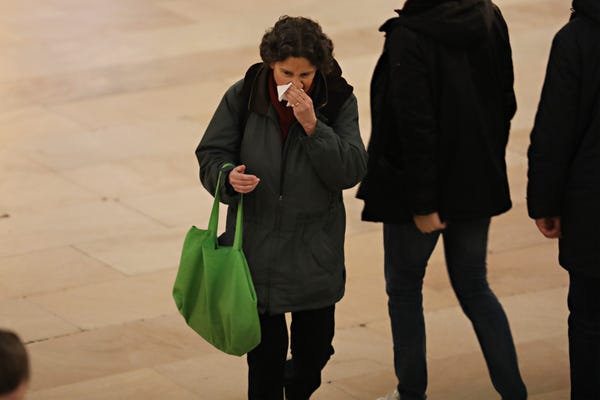 Masks were in short supply in the spring, so US officials were primarily concerned with preserving enough for healthcare workers. That shortage, combined with limited research about whether face coverings were effective in curbing the coronavirus’ spread, led experts not to recommend masks to the general public right away.

Instead, experts emphasized hand-washing and told people not to touch their faces, since preliminary research suggested the virus could spread via surfaces.

More recent studies have found, however, that surface transmission is somewhat rare. The virus spreads mainly when people share the same air — it travels either through respiratory droplets exchanged when an infected person coughs, sneezes, sings, talks, or breathes, or via smaller particles that linger in the air for minutes to hours.

Americans returning from abroad flooded US airports after Trump banned most travel from Europe on March 11. 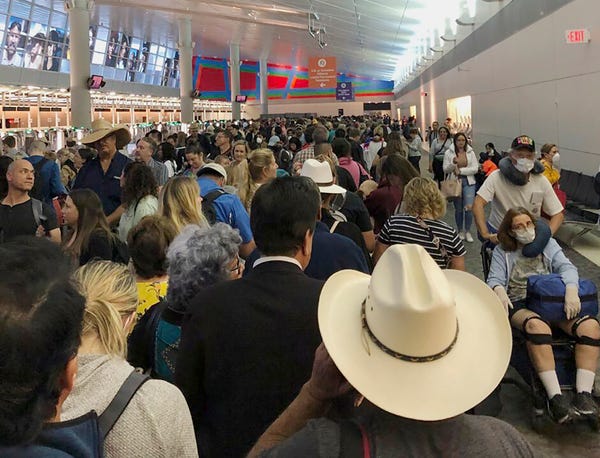 Passengers waited in hours-long customs lines in cities like New York, Chicago, and Dallas/Fort Worth.

Chicago Mayor Lori Lightfoot told The Wall Street Journal that people were standing “cheek to jowl” at O’Hare International Airport. A passenger told the Journal that baggage claim there “looked like Ellis Island.”

Several major sports leagues suspended their seasons during the second week in March. 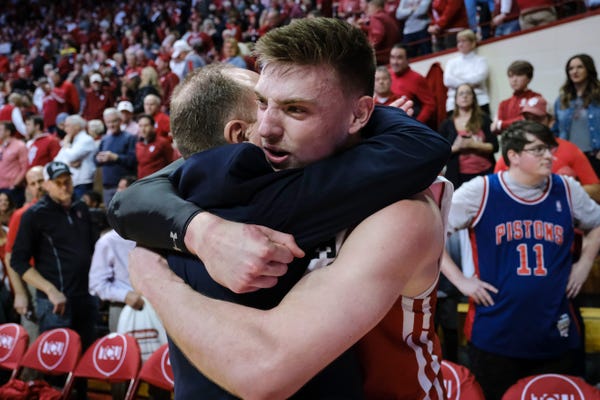 Sports stadiums have recently started to reopen at partial capacity. At the end of February, New York City began allowing 10% of seats to be filled in stadiums like Madison Square Garden and the Barclays Center. 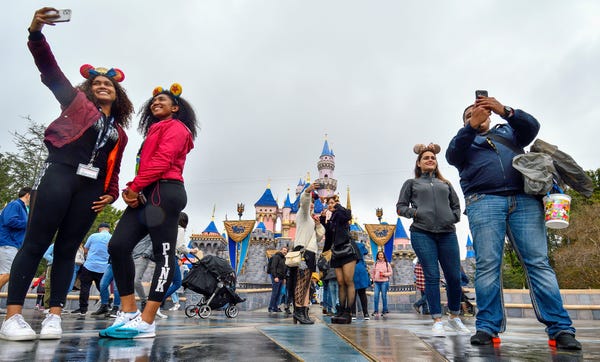 The parks remain closed, but they could reopen as soon as April 1, according to California’s guidelines. Capacity could range from 15% to 35%, depending on local transmission rates.

The New York Stock Exchange didn't go virtual until March 23, after two of its employees tested positive for COVID-19. 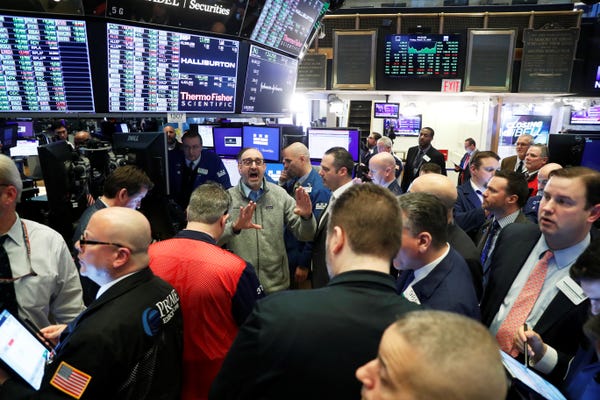 By then, New York’s stay-at-home order had been in place for three days. The physical trading floor had never shut down independently before, even during World War II or 9/11.

At a March 15 press briefing held indoors without masks, Trump said the US had "tremendous control" of the virus. 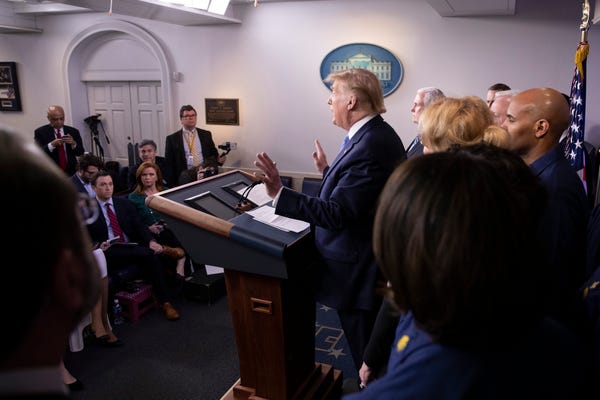 At the same briefing, though, Fauci warned that “the worst is yet ahead.”